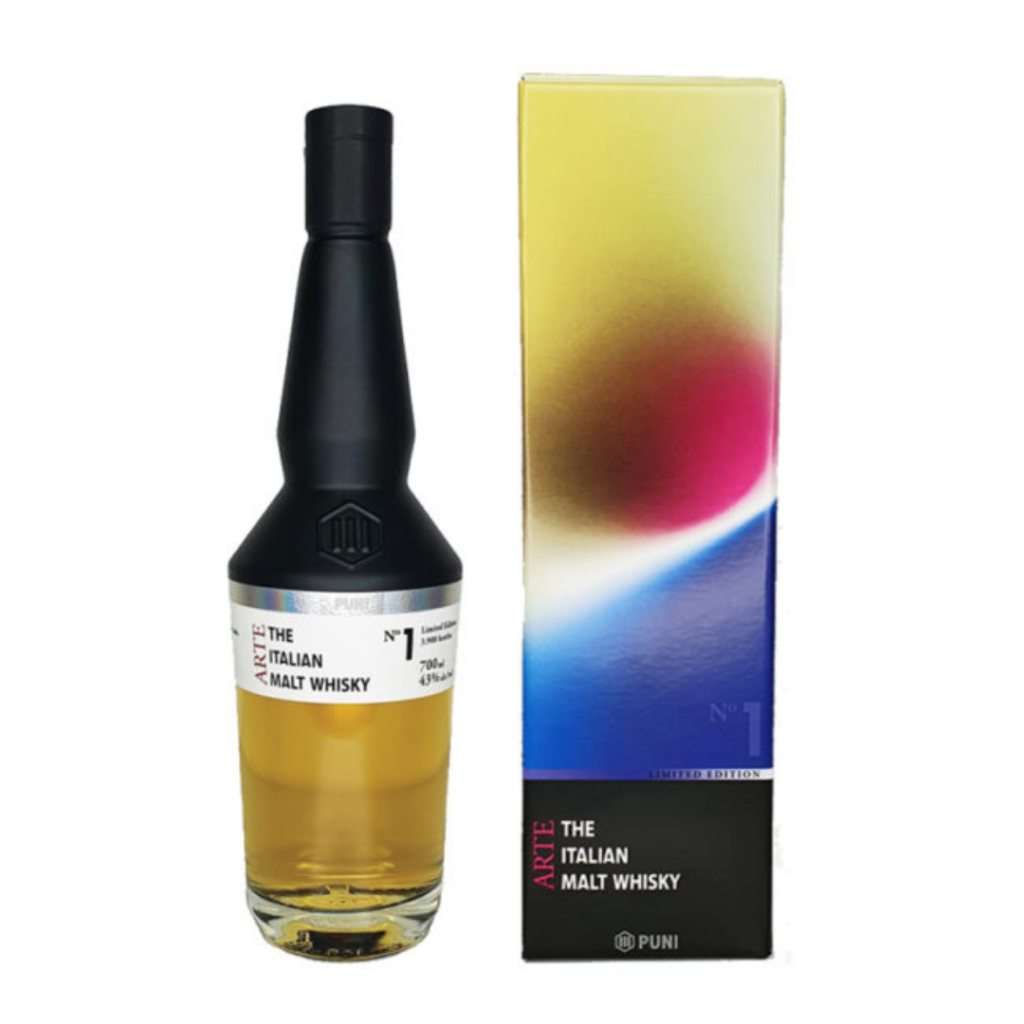 After 8 years of stills filled, heated and emptied, by now even the most distracted should have realized that there is a perfectly functioning whisky distillery in Italy. Over the years, Puni, a small family business in South Tyrol, has earned the respect of many whisky aficionados for the courage and for the quality of some bottling (we especially liked Puni Nero); and today it is certainly an example for the many distilleries (more or less micro) that in our country are beginning to look with interest at the world of whisky. Eight years of distillation are a crumb compared to the bicentennial history of some Scottish or Irish distilleries, but now the time is ripe for virtuosity and therefore… here we are with Arte! Released a few days ago, this limited edition of 3900 bottles is the first of a series dedicated “to the art of the italian crafting”, and it was born from the vatting of ex bourbon barrels and ex Scotch whisky barrels, most of which contained peated whisky from Islay. The age is not declared but it should contain the whisky of some of the older barrels put to rest in Glorenza warehouse. Uncolored and unchill-filtered, which is unusual for a whisky reduced to 43%.

N: let’s immediately state that alcohol is almost non-existent. The aromas are well unfolded. The decisive influence of the former Islay barrels surprises us: there is a lot of sea, seaweed and even a bit of smoggy smoke. Wet earth, there is a general sense of humidity. The sugary part seems to be well integrated to these first edges, between yellow apples, orange and tangerin. Cream and vanilla to give a sense of mellow matter, although to tell the truth the general profile is delicate.

P: the body at 43 degrees can certainly not be explosive, but we can not even complain, because this waw it is really easy drinking. At first this is still Islay-styled, with salt, seaweed and a light ashy peat, but insistent, grumpy. Immediately after it, we have the most classic notes of ex bourbon aging, like vanilla, sugared almonds, icing sugar. A thread of citrus fruits to give freshness and then the youth comes out, in the form of glazed morning cereals and bread made in a wood oven.

F: dried grass, burnt grass, cereals and even vanilla. Quite long, interesting in its cleanliness.

In addition to the surprisingly striking effect of the ex Islay casks, the vatting was packaged very gracefully, leaving a few flashes of distillate in evidence. Spices and woody excesses are absent and everything is well integrated; on the other hand, the simplicity of a certain bourbonish sweetness makes us perceive it as a whisky to be drunk without too many intellectualisms, with ample sips. In this year of forced separation from Scotland, Puni Arte makes us dream of Islay, but with the awareness that we also have a good whisky here in Italy: 85/100. In Italy you can find it here on whiskyitaly.it

Our virtual drinking pal whiskyart also liked it very much.