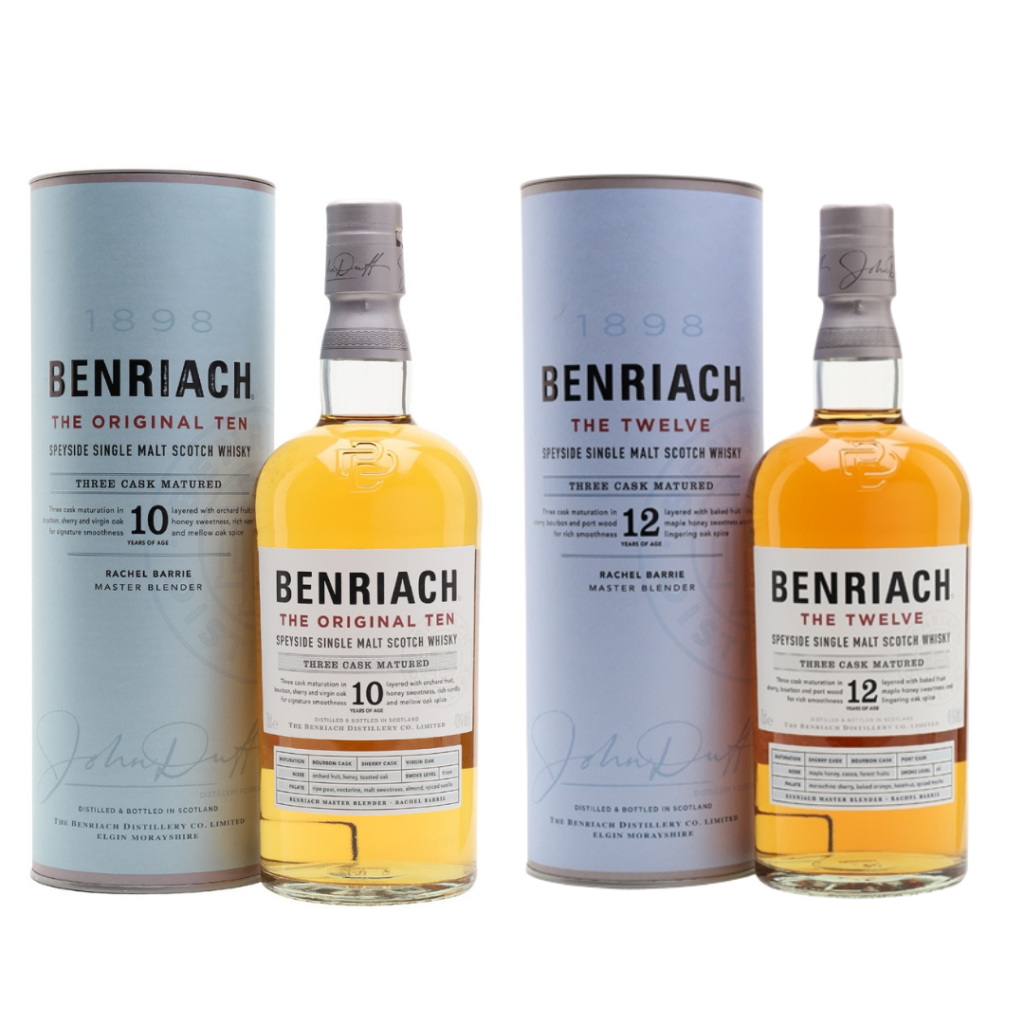 A few months ago, BenRiach redesigned its dress, and presented a new core range, with new bottlings, new labels, new packaging. At the base of this new range there are four whiskies with the age clearly stated on the label: two 10 and two 12 years old, in two versions, peated and unpeated. This is nothing new: BenRiach has been distilling heavily peated malt since 1983, when it was still owned by the Seagram group – the popularity of this version was such that even Billy Walker has retained this style, which now fully identifies the distillery. Today we will taste the unpeated couple, next week we will taste the other one..

A mix of Virgin Oak, Sherry and Bourbon Casks.

N: very aromatic and open, the first note that invests us is a mix of almond paste, vanilla and dried coconut. But don’t think of an all-sweet and creamy nose: there is in fact a green patina, like chlorophyll, which is very refreshing (but also a bit artificial, with a hint of toothpaste), and also a hint of fresh almond – and the fruit, all played between pear and apple, is simple but delicious. A little sultanas and small red fruits (wild strawberries).

P: fairly light and fresh; quite consistent, the palate brings out a little more of the raw material – there is malt, herbaceous and almost bitter. Almond peel. Then there is still all that fruity and creamy, but not very sweet component. BenRiach’s herbaceous and acidic distillate tends to dominate here – albedo, citrus. A memory of kiwi.

F: short, dry, between lemon and a (skin of) dried fruit. Barley grain.

Simple and very pleasant, it looks like a perfect malt to drink without thoughts, during an aperitif: light, fresh and with a nice acidity, it will not remain indelibly impressed in the heart but it does its job with seriousness and self-denial. 82/100.

This time the mixture of barrels includes ex-Sherry, ex-Bourbon and ex-Porto.

N: very curious, he exhibits some very curious ‘bittersweet’ notes (there is even one among us who said ‘Ponzu sauce’ – for shame we will not reveal his name). There is a remarkable citrus freshness, with a sense of acidity that promises to be exorbitant. Something of damp wood, of the cellar (and this is a scent we often find in the ex-Port). A little dried apricot, lots of toffee, toffee. A shock: a gastronomy counter, with that mix of sweet and sour scents… Lots of fruit, a fruit coulis perhaps?

P: here the red fruit can be felt much more, but the suggestion that strikes us most is that of peaches in wine. For the rest it is sweeter than the nose, the acidity regresses in favour of caramel, toffee – also here red fruit coulis, strawberry we would say. A slight bitter and herbaceous note remains in the background, still with almond peel. Orange Marmalade.

84/100. Here, too, we must immediately recognise a great drinkability, bordering on the dangerous. Pleasant and fruity, here the sensation is one of greater structure, of greater sweetness and – as it were – of greater ‘importance’. In all honesty, the palate and the finish convince us more than the nose, but you know that we usually have that problem there with the ex-Porto barrels – which also give very interesting twists here. The entire range is available for sale on Aquavitae, among others. Many thanks to Mirko from Fine Spirits for the samples!