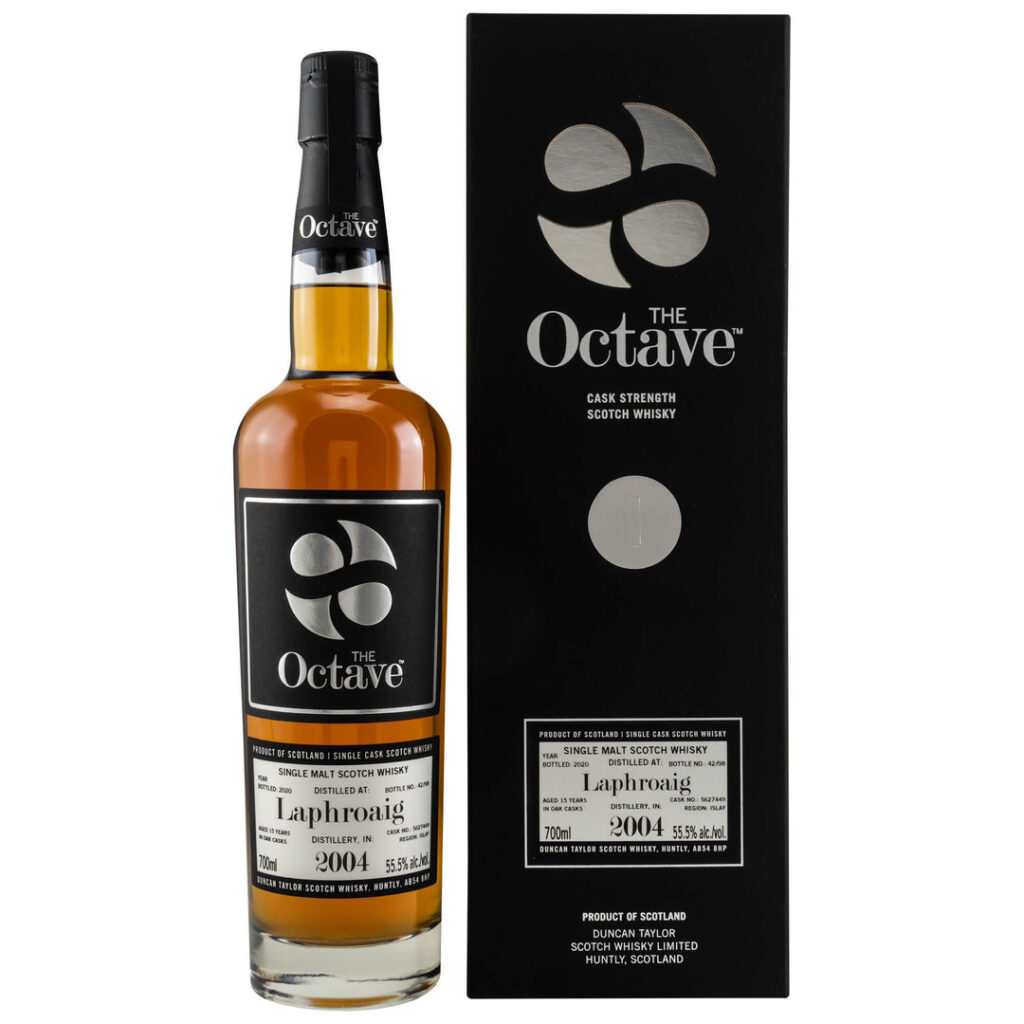 “Small cask, bigger whisky’ is the slogan that historic independent bottler Duncan Taylor has chosen for The Octave series, in which 50 litre casks are used. Now, leaving aside the fact that the slogan is somewhere between an advertisement for a miraculous penile erection ointment and a boar brush commercial, one must give Duncan his due. The use of smaller barrels, resulting in greater interaction between distillate and wood and faster maturation, has become his trademark and has been somewhat copied for years. But try to copy this one, if you are able: a 15 year old full strength Laphroaig of which 123 bottles were produced. The colour is a deep gold.

N: a bag of caramel, which initially crushes everything. Burnt herbs such as myrtle and laurel then emerge. Something of green Tabasco, mint or thyme. Very herbaceous and grilled, with a growing barbecue sauce. One of us suggests a hint of diluted Abruzzi anisette. As time goes by it becomes more robust, with a rounded presence of Tuscan cigar still wet, impregnating, total, with even that spicy note. A bit of yellow fruit salad. A Venetian with butter, but butter with herbs. They don’t make it, we know. In any case, now it has become a cream, and there is also a hint of sea. More barbecue sauce and bacon, ad infinitum. With water comes out vanilla and butter brioche: in short, out comes the barrel.

P: Ladies and gentlemen, how delicious. Very full, here there is much more fruit: peach melba, cooked apple. And a delicious zabaglione to testify that the idea of cream on the nose was not a mistake. At 56% it is very well made, with zero alcohol and a fruit that holds its own against the heavy peat. By the way, more Cuban cigar and tobacco leaf, acrid but rich. Little medicinal (camphor at most), Madagascar vanilla, a tropical soul like that of the old Laphroaigs. Roasted peanut.

F: Here, the alcohol content is low, the smoking becomes more modern, like a burning embers. A bit of sea (fish oil) emerges. And the mouth remains wrapped for an infinite time in swirls of honey and spicy wood.

A “generation X” whisky, which does not know whether to be old-fashioned or modern. A whisky of rare richness, to appreciate which one has to make a dent in one’s own, given that it can no longer be found for less than 300 euros. Leaving aside the paltry economic considerations that essentially betray our misery, this is an atypical Laphroaig, in which the medicinal part takes a step backwards and the barrel – obviously, being an Octave – takes two steps forward. The nose is initially a little shy, very caramel-like, but with time it gains depth and complexity. The palate is immediately more interesting, with an excellent integration of the alcohol and above all a wonderful, rounded fruit that makes us dream. And an hour after we have finished writing these useless lines, we still have our palate cuddled by burnt peat and sweet. 88/100.