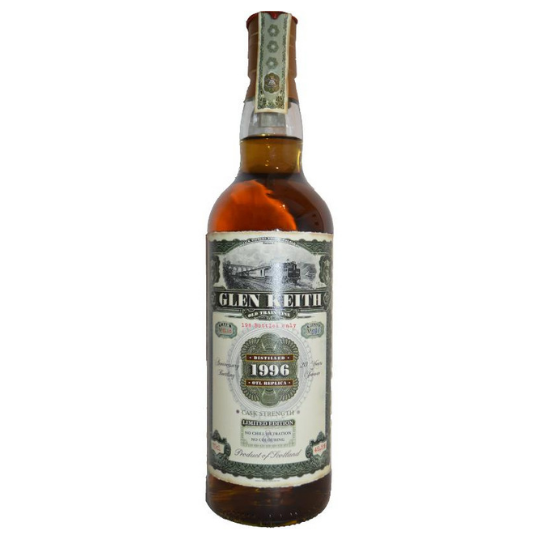 Our sample cabinet has recently undergone some moving, tidying and feng-shui. Which means that now all the peat is looking east and our inner harmony has definitely improved. In this quest for physical and mental wellbeing, we realised that since the last Whisky Revolution Festival we have returned with a suitcase full of samples and some are still waiting meekly for our pampering. Among them, several are from Jack Wieber’s bottlings, a Berlin-based selector who has been doing the most beautiful job in the world since the late 1990s and is imported to Italy by Fabio Ermoli’s Lost Dram selections. This is a 20-year-old Glen Keith, distilled in 1996 and bottled in 2016 for the ‘Old train line’ series: 198 bottles came out of barrel #8116. The colour is pure gold.

N: the nose is a greengrocer’s shop: ripe fruit, melon galore, soft apricot compote. Full, mellow, very dense. A tad alcoholic, with some woody scents here and there to show its age. Then comes a theory of dry, malted Digestive biscuits, toffee and something of burnt caramel: some even evoke banoffee pie, the caramel, banana and condensed milk cake made by a diabolical, sadistic mind. Alongside, to dilute the clamorous density, there is a touch of citrus, more subtle, like mandarin marmalade. Despite the fact that there is some eucalyptus honey in the background, this is a very different nose from the more tropical and fresh profiles that Glen Keith has accustomed us to. With water it becomes more sparkling, with a hint of sherry vinegar.

P: here is the old-fashioned severity of the 20-year-old. It is still sweet, with a very rich and enveloping fruit (still composed of melon and apricot, no citrus), but immediately turns towards a rich and dusty austerity, of wood and pure malt. An elegant dimension of dried herbal tea and hay. In general it turns to an old-fashioned dryness, almost too much: bitter almond peel. Diluted, it becomes less powdery and bitter, but also flatter. In general, water is not good for it, it also has a hint of vinegar.

F: melon in the background, but here the malt wins hands down. With still that bitter aftertaste.

We are split, like a jury that cannot decide whether the defendant is innocent or guilty. It certainly has some delicious notes (the very rich fruit, the exciting entry on the palate), but also some clues that condemn it: a certain propensity for bitterness and some acetic notes that seem wrong to us. What we miss about the Glen Keith we know is the sharp refinement of the fruit: we were used to yellow-green and now we find orange. And let’s not talk about politics, thank God: 85/100.

Recommended soundtrack: Röyksopp – What else is there?