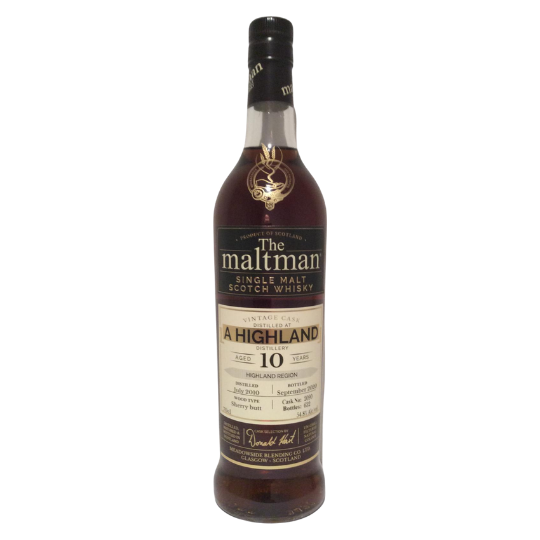 We announced it last week, and here it is: straight from independent bottler The Maltman (Meadowside Blending), we’re looking at a second ‘Highland mystery malt’ from an undisclosed distillery – but the back label on the bottle reads ‘distilled in Sutherland’, so we know where to point the lens. This Clynelish (oops!) is aged for 10 years in an ex-Oloroso Sherry Butt: usually, in our opinion Clynelish is at its best in ex-bourbon casks, but we’re ready to change that. Natural colouring, full grade, no cold filtration – need we say it?

N: if we were looking for distillery indicators in this nose, well, we’re falling short – what dominates the scene is certainly the cask, undoubtedly very marked. There is an initial note between the metallic and the very light sulphurous, reminiscent of a burnt resistance (says that manly man Zucchetti) or a still. Edges of extra dark chocolate, with its extra acidity charge. Maraschino, multifaceted orange (zest on the stove, but also orange a bit gone). Tomato leaf. Some hints of Kenyan coffee (says that resourceful man Corrado: “because Kenyan coffee often has notes of tomato”, he had the courage to add).

P: the alcohol is not felt at all, it is very drinkable and obviously super charged and very, very full. Pleasantly acidic, it is very salivating. It starts off with notes of sultanas (but sultanas that have been in the oven: those from panettone) and plums (congealed plum jam). Chocolate again, and again lots of coffee. Mineral notes, let’s say of slate, and something almost waxy, but it is candle wax, paraffin, not beeswax. A delicious note of panforte. Very pleasant indeed.

Let me say without too much fear: if we have to compete in Clynelishness, well, the winner is definitely the malt from Passion For Whisky, because as often happens here the sherry tends to cover up the nature of the distillate a little too much. The result is excellent, of course (how many other 10-year old ex-sherries have this pleasantness, this balance, this depth? not many), but it lacks that waxy, fruity and austere dimension that best comes out in American oak. Oh, he still brings home a great performance, he fights for the whole 90 minutes, he just misses the goal: a bit like Lukaku last night against Juve. The important thing is to win, isn’t it? 87/100.