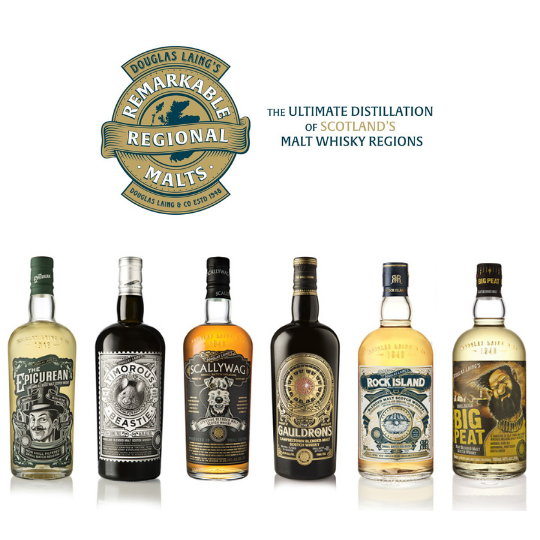 One of us, the one who redeems an adolescence as an excluded chubby kid with a maturity as an invitee to any kind of tasting, participated a few days ago in an online tasting of the legendary ‘Remarkable regional malts’, the series of ‘localist’ blended malts created by Douglas Laing. The event, organised by Whisky Club Italia and DL’s Italian importer, Rinaldi, was an excellent opportunity to catch up with some old (long-standing, not anagraphically!) friends like Davide Terziotti and Gabriele Rondani, Rinaldi 1957’s sales manager. And above all, it was a rather rare occasion to taste five regional malts one after the other, like episodes of a TV series that takes us by storm.

Douglas Laing, the independent bottler who started in 1948 with the blended King of Scots and made it big with his selection of single casks, revolutionized the Scotch landscape 12 years ago with a series of blended malts which, as European sales manager Dale Perry explains, “were designed to reproduce the typical whisky flavours of that region”. Today, the regional differentiation of Scotch is seen as less and less significant: in a landscape where experimentation is now the norm, with Islay distilleries using unpeated malt, peaty Speysiders and islanders maturing in red wine casks, more and more whisky bars have moved away from the regional division towards one based on profile. However, this does not erase the sensory archetypes linked to the areas of origin.

If regionality is on the wane, blended malts have been the talk of the town for quite some time now: spectacular value for money, drinkability, and a general feeling that they are underrated and about to become the new trend, especially given the price inflation of single malts. If we go into specifics, Douglas Laing’s philosophy is as natural as it gets, so no colouring or filtration, sustained alcohol content and production in small batches (the DL guys are keen to say that they are all ‘single cask blends’).

We’ve rambled on long enough, so here are the impressions of the five whiskies tasted. Three of them have already been reviewed, so the reporter will not be voting. Ah, for completeness, we add instead the review of The Gauldrons, the blended malt of Campbeltown that is not part of the kit and closes the series.

The Epicurean (2019, Douglas Laing, 46,2%)
It starts in the Lowlands. Here, malt whiskies from Auchentoshan, Glenkinchie and Ailsa Bay are said to swim in. The label shows a Glasgow gentleman with a moustache and top hat in 19th century fashion. N: fresh and herbaceous, very lemon sorbet and chamomile. Youthful leaning towards childhood, you can hear the lullaby of the new make. Cut grass, fennel, a touch of turmeric and vanilla. With time the herbaceous dimension becomes almost rosemary. An impression of the sea. P: sweet, melting banana and lemon candy. Light but not drab, spicy touch of ginger. Young, but clean. Unripe pear. Sweet and salty orange with water. Sal y naranja is the new sal y limon? F: Consistent, sweet lemon, herb and fennel. If Lowlands means a light, herbaceous spirit, then this is textbook. There’s a lot of youth, with a touch of distillate especially on the nose, but all in all the effect is pleasant. Fresh, drinkable, summery. Good boy: 82/100.

Timorous Beastie (2019, Douglas Laing, 46,8%)
The beastie in question – a mouse – is a tribute to the Robert Burns poem (also him) entitled ‘To a mouse’: small, but if you bother him he can stand up for himself. In the recipe, whiskies from Dalmore, Glengoyne, Glen Garioch and Blair Athol. Fun fact: the first remarkable regional malt with declared age was a Timorous Beastie 40 yo, released in 2016. N: In some ways similar to the Epicurean, with lemon, light heather honey and perhaps heather itself, as there is a floral dimension hovering. There’s a herbaceous touch here too, perhaps more celery than sage. We forgot the fruit, but it’s there, albeit subtle and sour: orange, rennet apple juice. P: a certain viscosity strikes, an oily body reminiscent of herb butter. Pear, green apple, less sweet than the Epicurean. Fresh hazelnuts and almonds. Spicy porridge (nutmeg) and a hint of raw, mineral cereal. F: spices, dried fruit, meringue and a surprising hint of smoke. A whisky with food issues, on the one hand thin and on the other fat. The Highlands profile is mineral and slender, but the body of the distillate is chubby. The effect is curious, but pleasant. Here is the short review and rating from the owners of this elegant online lounge.

Scallywag (2019, Douglas Laing, 46%)
A few miles further north to Speyside. Scallywag has a fox terrier with a monocle on the label, a nice homage to Binks one of the Laing household pooches. It is the only one of the RMs to be partially aged (75%) in Oloroso sherry casks. Inside, among others, are whiskies from Mortlach, Glenrothes and Macallan. We already feel like wagging our tails. N: lots of citrus youth, then red apple, cinnamon and gingerbread. It remains fresh and Christmassy at the same time: gradually dehydrated fruit emerges (apricots, sultanas and papaya) and a hint of cocoa. A hint of grilled meat, perhaps, in the distance. You can feel the sherry. P: and it’s a modern and agile sherry, quite expressive but again very young. Candied orange, zuppa inglese. There is a touch of tannin (pepper, dried fruit). Caramel in profusion and spices. F: sweet tobacco, peppery bread, toasted. A pleasant drink, with no worries or concerns. One can even delude oneself into thinking that one can recognise the various components, the slightly meaty, the more caramelised, the fruity…. But that would be useless, better to pour another. Here is the review by my honourable colleagues.

Rock Island (2019, Douglas Laing, 46,8%)
Arran, Jura and Highland Park in this boy from the Scottish Isles who carries on his label a hatching shell with a pearl inside. A Tridacna gigas, for the not-so-few of you who have expertise in Pacific bivalve molluscs. N: our unimaginative sense of smell immediately picks up sea, salt, rocks, fish, beach. All that’s missing is a pedalo and the coastal panorama is complete. Squeezed lemon and bread dough. Then there is the unfailing mineral peat (graphite? gunpowder?), faint but distinguishable, hovering over white fruit ranging from peach to gooseberry. There is also a hint of pickle, the kind of flicker you get in a Gibson cocktail. P: next to the obvious saltiness, a bay of vanilla creaminess opens up here. Seawater and salicornia, smoky vegetable peat, all very harmonious. There is a hint of green and a pinch of pepper. White melon and celery. Literally mouth-watering. F: long, salty, grilled fish, clean and herbaceous. Sea whiskies, so savoury and taut, if they are made well, are exactly like this: evocative and darting, clear. Of the gift pack, this is the most exciting precisely because of its balanced essentiality. The rating can be found here.

Big Peat (2019, Douglas Laing, 46%)
The company’s most famous and undoubtedly best-selling whisky on the Italian market, where it is well known that peat is a bit like cream in 1980s recipes: they like it. A curiosity: unlike 99.9% of whiskies, for which in English the neutral pronoun it is used, at DL the masculine he is used, testimony to the fact that the fisherman on the label has himself become Big Peat. Incidentally, the creative team had drawn a sketch of a smiling fisherman, but Fred Laing rejected it: ‘He’s going home to his wife, he needs an Islay Scotch to cheer him up’. And so was born the bearded hero with the classic grimace we’ve come to know, behind which are whiskies from Bowmore, Ardbeg and Port Ellen peated at 40 ppm. N: Lemon and fish with lemon, grilled of course. Then it’s not like you can ask us what kind of fish too, eh! There is certainly a sweet, simple and pleasant vanilla part, coupled with camphor. Pear mousse, yeast and of course peat, just like wood burnt in a bonfire. P: curiously, the impact is a little watery, sweet but lean: lime, bread dough, white fruit. Then the burnt peat explodes, burning coals (those on which Giucas Casella walked!). The herbaceous touch of the nose here becomes grilled endive. A pinch of salt and a sensation of mezcal. Young but perfect. F: ash, sugar, ginger and lemon gummies, long. A whisky to drink in cups, simple but no less interesting. An extra point because the use of peat is never coarse or vulgar: it’s certainly there, and you can feel it, but it doesn’t annihilate the other flavours and blends well with the youth of the distillate: 86/100.

The Gauldrons (2019, Douglas Laing, 46,2%)
Closing the evening (we actually tasted it the next evening because it was getting a bit late, but the public is just as interested in that) was The Gauldrons, the sixth and latest addition to the Remarkable regional malts, dedicated to the small but fascinating region of Campbeltown. The packaging is a bit esoteric/masonic, but in reality the web is based on the legend of Robert The Bruce, the king who – defeated several times by the English – took refuge in a cave in Campbeltown where he saw a spider continuing to weave its web, destroyed by the fury of nature. We, as patient as that spider, pour again and start tasting. N: There are similarities to Rock Island: the lemon, the doughnut mixture, the sea water. Then there are the differences: more vanilla, some pink grapefruit sorbet and a bit of ‘dirty’ brine, bordering on smoky, mouldy cereal, to the cheese crust. There is also something aromatic and fragrant, between floor wax and roses. Curious. P: sweet and salty together and slightly peaty. They shoot a little spice (ginger and pepper) and the effect is not very pleasant. Salted caramel and salted nuts, smoked cereal again. And a strange wood dust sensation for such a young whisky. F: medium short, burnt cane sugar, wood, pepper and lots and lots of salt. Something is not right: a very inviting and mysterious nose, deep and particular, is followed by an excessively spicy palate. The ‘closed’ savouriness of Campbeltown alone, however, is worth the price of the ticket, pardon the bottle. 83/100.