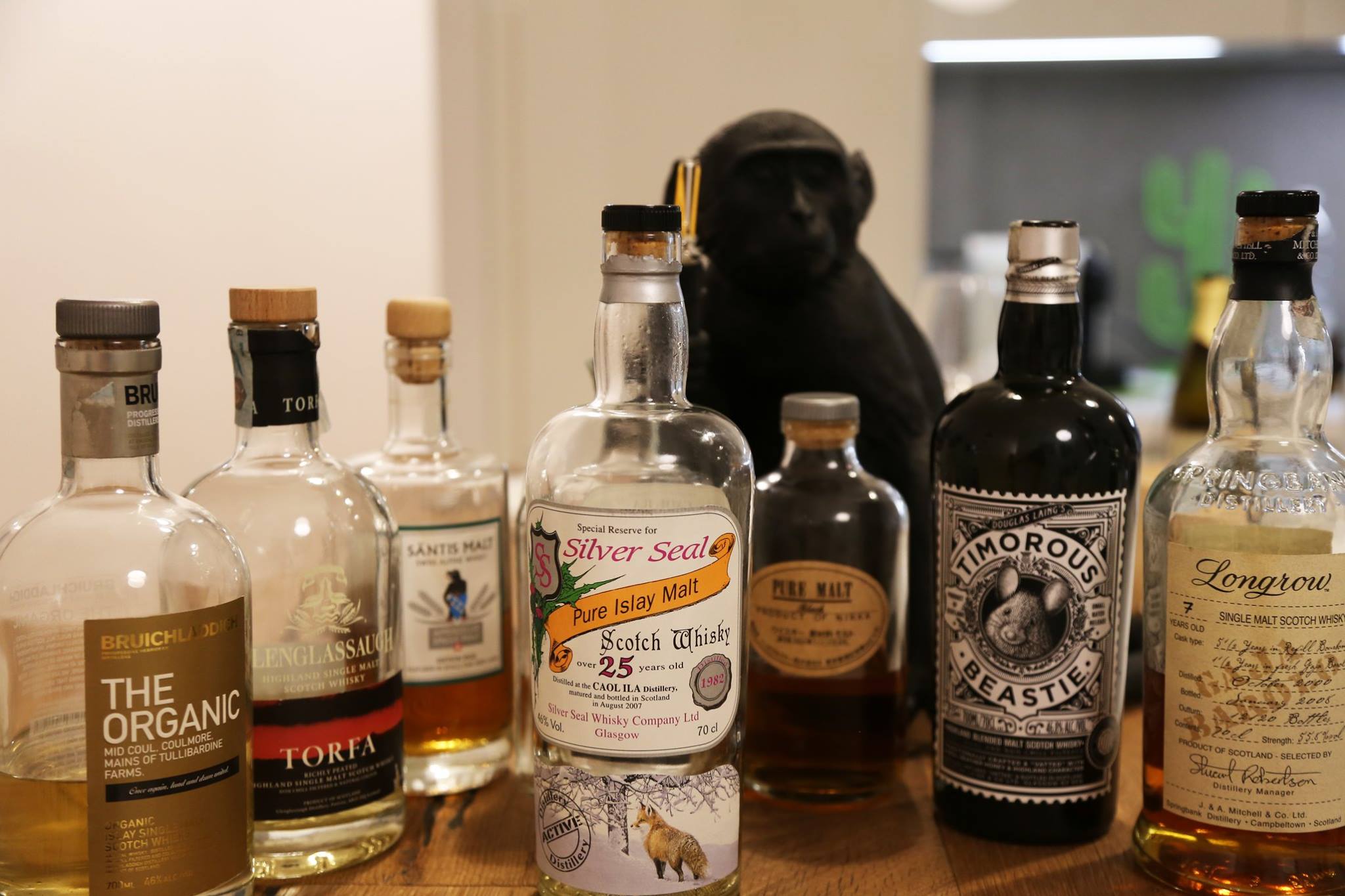 The interest in whisky is constantly growing and this is testified by the proliferation of initiatives and events, organized above all from the “common whisky people” and aimed at spreading the Malt Word and its aware consumption. Among the recent phenomena, we would like to point out the Monkey Whisky Club, a secret group that since the beginning of the year, thanks to Andrea’s verve and passion, has been organizing very nice tastings, under the sign of monkey on the shoulder and hedonism. Some weeks ago we attended the second appointment, and today we come to give an account of all that booze. In addition to the five whiskies that you find (almost) reviewed below, we also tasted a Caol Ila 25 years by Silver Seal and that excellent Longrow in Barolo… It’s not bad, is it?

Santis Malt (OB, 40%), the object of mystery comes from the Swiss Highlands (?) and is aged in beer barrels. It turned out to be a decent dram, sweet and very vanilla oriented, with an honest whisky flavor. No trace of those beer barrels and maybe it is much better this way: 78/100..

Timorous Beastie (2016, OB, 46.8%): Douglas Laing continues in the creation of NAS with a very catchy concept. This little beastie is produced using only single malts from the Highlands, including those from Dalmore, Glen Garioch and Glengoyne. Actually, despite having just mentioned three distilleries famous for a massive use of ex-sherry barrels, Timourous is a very bourbony whisky, with vanilla and distinct hints of heather. Fascinating mineral notes and a slight veil of peat on a profile of sincere youth: 82/100

Glenrothes 24 yo (1989/2013, Cadenhead’s Small Batch, 56.9%): Scotland’s oldest bottler has selected a pair of ex-bourbon barrels from Glenrothes and assembled them for this powerful Small Batch – a monstrous full-bodied whisky with an impressive fruity intensity all played out on peaches in syrup, apricots, pineapples… The creamy and vanilla side is also remarkable, all enhanced by a high but not unpleasant abv. Probably the best of the day: 88/100.

Bruichladdich The Organic Ed. 2.10 ‘Mid Coul’ (2012, OB, 46%): the imagination of this distillery even goes as far as conceiving ‘single field’ bottling, with barley from a single farm. Beyond the reckless marketing operation aimed at exalting the terroir, this Laddie is fundamentally honest, very malty and a little buttery, though quite naked. A strand of peat. Simple but pleasant: 84/100

Nikka Black (2016, OB, 43%): from Switzerland to Scotland, we didn’t disdain an intercontinental trip to taste one of Nikka’s core range bottlings. The Black is a vatted malt from Yoichi and Miyagikyo distilleries, with a good body and very easy drinking. We like its simple character, with lots of ripe fruit (peaches and red apples). The contribution of peat is evident and especially on the finish the spices (nutmeg) explode: 86/100.