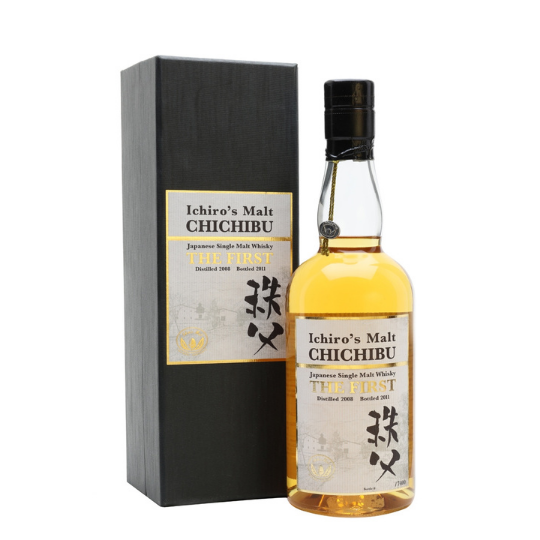 Here is the very first edition of Chichibu, famous because at Whisky Live in 2011 it caused a sensation, astonishing most people and giving unexpected emotions to those who still did not believe that Japanese whisky was a serious thing. It has to be said that at the time, when everyone was more naive than today, Japanese malt was in fact something exotic, something that had just appeared on the global market (the first prize awarded to a Japanese Whisky was in 2001) and that many could look at with a little tenderness and curiosity – thinking back today to certain subdued laughters, to a certain irony about the far east, well, tenderness and curiosity are deserved by us Westerners. In any case, this is the bottle that gave birth to the myth of Chichibu: with a 10-year delay, we taste it today.

N: the alcohol content is unnoticed, which is astonishing given that the label says 61,8%… There is immediately a very particular note of saffron, which opens up to a very seductive profile, with notes of vanilla and coconut, a little lemon (or rather: one of us imposes himself and says ‘mandarin’ – which would also be fine, if he didn’t go so far as to say ‘pomelo’), lots of apple juice. Intense notes of pineapple juice.

P: sweet and very pleasant, the fruitiness becomes even more explosive: apple and citrus fruit, lots of pineapple – in fact, we must note that here it becomes fully tropical. Tangerine, testifying to the citrus. Then vanilla, cereals… Also quite creamy. The water opens everything, and the profile becomes pineapple ice cream and pine needles.

F: not very long, rather herbaceous and still sweet (pineapple and lemongrass), with some slight balsamic hints.

We understand how this malt has surprised everyone, and we also understand what impact Chichibu has had on the many distilleries that have sprung up and grown in the last 10 years: the maturity of this distillate at only three years of age is amazing, and the alcohol, which should be aggressive given the alcohol content, is perfectly integrated and almost inaudible. Many have followed the path opened up by Ichiro, but few perhaps know how to follow it with the same seriousness. This debut, even after many years, cannot be awarded less than 86/100.