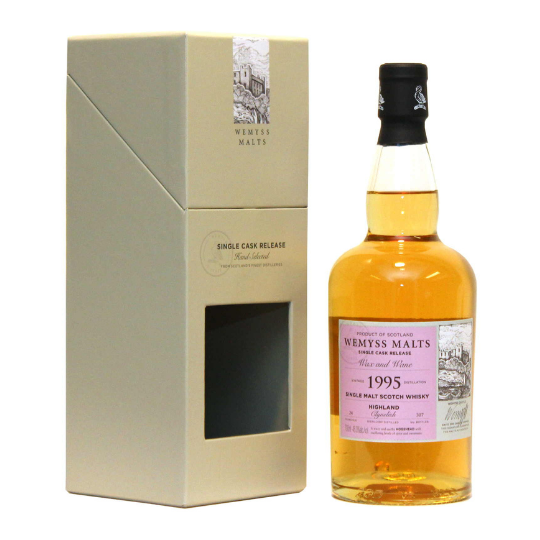 We’re constantly on the lookout for Wemyss Clynelish, as we’ve tasted some truly exceptional ones in the past – and generally speaking, how many less-than-exceptional Clynelish are out there, eh? Very few, indeed. Anyway, helped by the usual little hand from abroad (and it’s the firm and virile hand of our Davide), we grabbed a sample of a 1995 Clynelish, bottled after 24 years by Wemyss and released at 46% under the name of “Wax and wane” – for non English speakers, it’s play on words between the formula meaning “cyclically increase and decrease” and the wax, a typical note of Clynelish: literally translated, it would be “wax and decline”, which we actually like more. We wallow in decline.

N: we’re in a rather sharp and restrained version of Clynelish: a lovely version, as you know. Wax and waxcloth, classic notes of the distillery, in the foreground: behind, a sense of ‘cold ironing’, if we understand each other. Citrus, lemon peel and cedar. Coastal tips, true Clynelish, with a sense of winter beach, with some herbaceous and dusty notes growing alongside. Only after a while comes a restrained sweetness, with apricot and green apple. Very shy, very sharp, very elegant.

P: consistent with the nose, here the citrus part immediately prevails, with citron and lemon still in evidence – here it remains a little dirtier, a little dustier, still with lots of wax, earthy and mineral notes, river pebbles. What strikes us here is a sense of ash that we did not expect. Very drinkable, perhaps suffering a little from the reduction – after a while, pear and green apple arrive.

Very good, but a little restrained, not too complex and a little weak, if we may, especially on the palate – in fact, it has a decadent, indeed perhaps ‘declining’ feeling. Mind you, we need more whiskies like this, and it is still a well above average malt: but we always expect the best from Clynelish, and when we have an excellent ‘normal’ whisky in the glass… we remain as if disappointed. We are strange people, aren’t we?. 86/100.