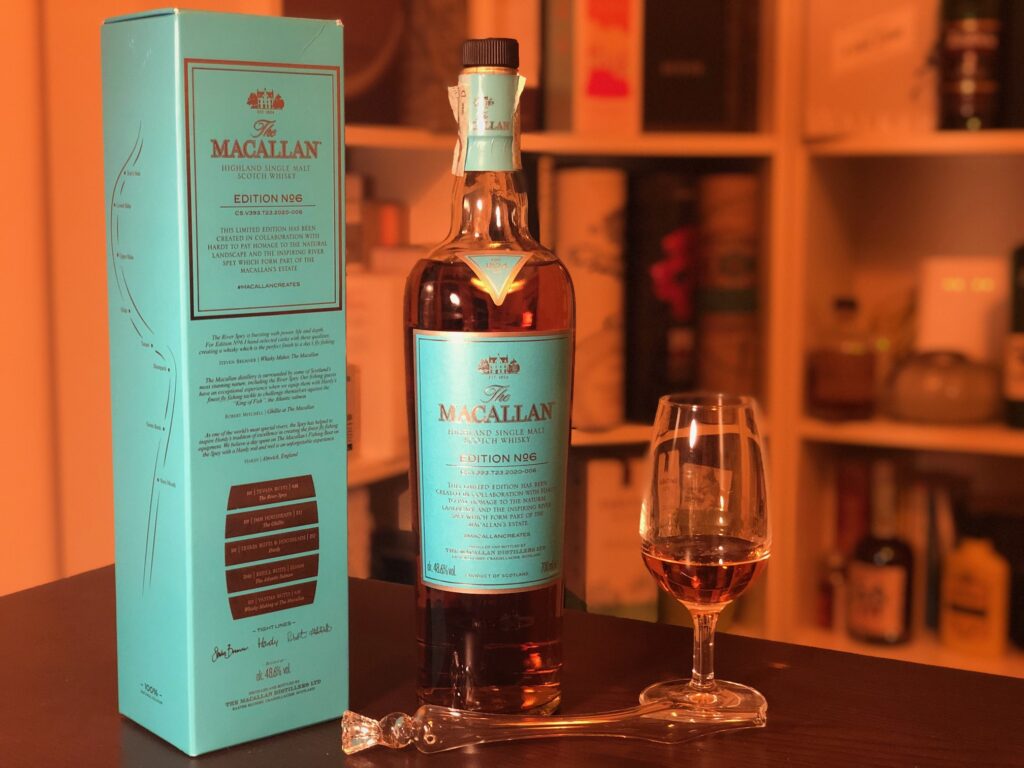 And after Strong Smurf, Four-Eyed Smurf and Papa Smurf, came Smurf Macallan! With the N.6 and its cheerful blue packaging, the iridescent The Edition series, whose expressions in the last six years have always been highly anticipated and much sought after, both by enthusiasts and collectors, comes to an end.

One of us attended the launch (alas!, always virtual) of this release last week, which was created to celebrate the Spey River and more generally the landscape in which the glorious Macallan Estate is set. After the editions dedicated to wood, taste, aroma, architecture and natural colour, here is the one focused on the terroir and nature of Speyside. From the wonderful ever smiling Nicola Riske, brand ambassador for Southern Europe, and from the great Angelo Canessa, representing the Italian importer Velier, we learned a few things about our Smurf: first of all that the link with the river is very articulated (too much!), since it is made in partnership with Hardy, a traditional brand of sports fishing equipment, and with the Atlantic Salmon Trust, the body responsible for repopulating the river.

In addition, the man who inspired “whisky maker” Steven Brenmer in the recipe is Robert Mitchel, the estate’s ghillie, the fish guard. Yes, because at Macallan you can also book a fly-fishing shed and spend hours praying that a trout or salmon will bite. Ah, we forgot the most important thing, the composition of the whisky: hogsheads and butts of American and Spanish oak, first and second filling, but all 100% sherry seasoned. End of storytelling, now let’s taste it.

N: Macallan, it’s really you! The first thing that strikes you is the fullness of the sherry. Modern sherry, of course, in its own way fresh and not heavy, but still intense. In particular, chocolate triumphs in all its forms, it feels like being in Knam’s laboratory. The American oak tree makes itself felt in a general sweetness, ranging from Malaga ice cream to toffee and pecan nut tart. The European one in deep hints of sultanas in spirit, prunes and lots of peach, both baked and fresh. Spices (cinnamon, nutmeg and tobacco) and orange, a sulphurous thread. Exuberant dried fruit, brown glacè. With time, aniseed seems to sprout, and this is not the suggestion of ice-coloured packaging.

P: a nice full and oily body, we will never tire of saying how the Macallans at a higher grade than the classic 40% and 43% are infinitely more expressive. Here the sherry is really an old-fashioned and aromatic Oloroso: enveloping vinosity and pleasant acidity, which gives citrusy vibrations (orange/quince, dried apricot, tamarind). The fruit also takes the path of the persimmon and plum jam on the tart, testifying to a sweetness that is present but never pleasant. Caramel again, dried fruit (pecans and hazelnut cream). Pleasant mixed and sweet spices and a certain humidity from wood in the cellar.

During the presentation someone underlined the freshness of this whisky, which reminded some people of the morning air on the shore of the Spey. But if it can work for the sense of smell, the palate would be wrong to call it just “fresh”. For us the best thing is a full return to the canons of “Macallanity”, that is the wise use of sherry barrels that have built the myth of the distillery. Let’s just say we would have used it for a warmer colour than blue, that’s it. It’s silly to make comparisons with the Macallans of the distant past, but to stay with the Edition series, it was since No.2 that we didn’t taste such a good one. Autumn, iridescent, very drinkable, deep. Now, however, please give us the salmon, we are hungry now… 88/100.