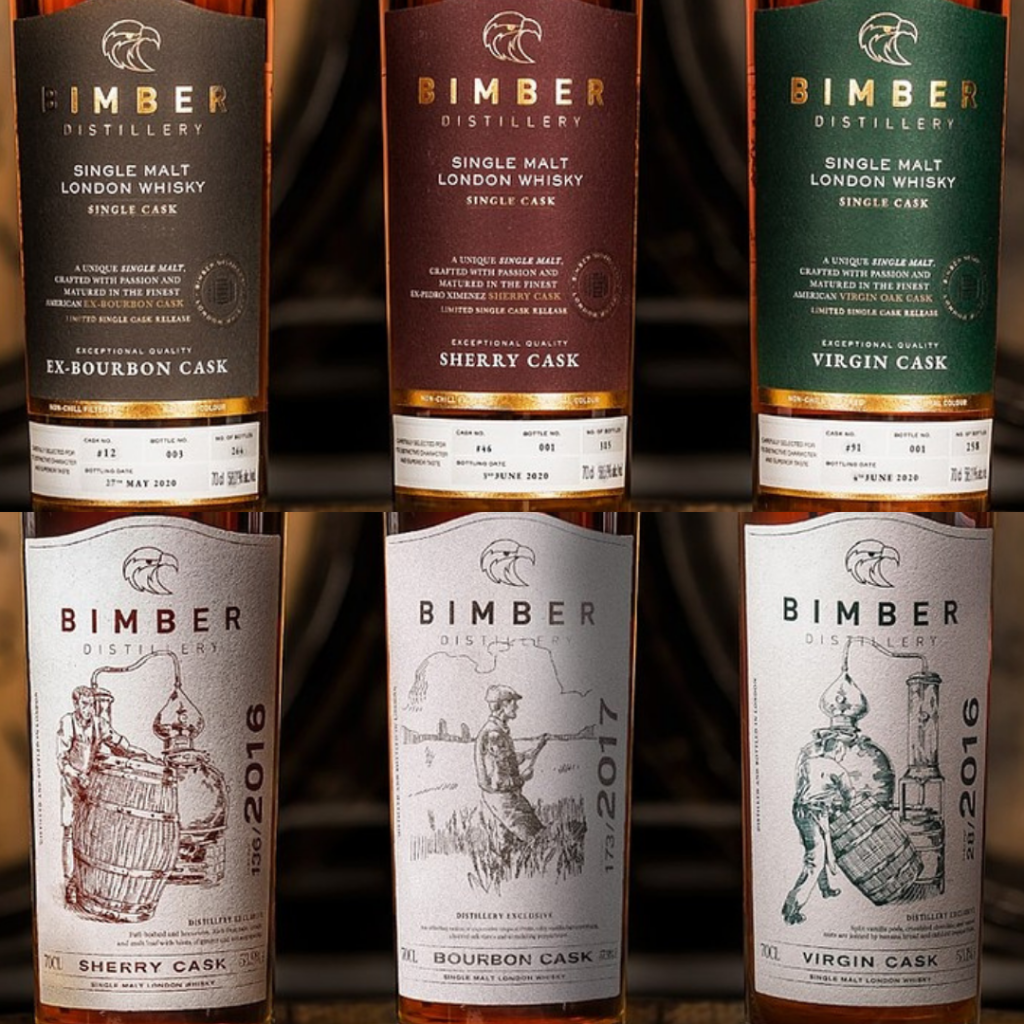 About ten days ago we took part in two online tastings organized by Bimber, the London distillery that’s conquering the hearts of enthusiasts and collectors around the world: these were two special tastings, because Matt McKay from Bimber presented three single casks for the Asian market and another three for sale exclusively at the distillery – both unattainable for us, European common mortals, in these difficult times. As Serge teaches us that ‘reason is in comparison’, here we are comparing the six single casks, pair by pair: first the two ex-Bourbon drams, then the two ex-Sherry, finally the two Virgin Oak.

On the nose there are immediately evident spicy notes, on cinnamon, propolis, a little rhubarb… Close behind it there is an aroma of ‘toasted pastry’, with notes of burnt cake crust, buttered toast with orange marmalade, even bread crust. Fresh wood, growing herbaceous scents. Citrus veins (mainly orange, also orange juice) and notes of toasted corn cob. The water leads to vanilla and yellow fruit. The palate is sweeter, generally speaking, and surprising because it is really explosive. It has notes of a very aromatic Traminer, with yellow fruit, pineapple cream, butter biscuits and a certain citrusy acidity, very pleasant (lemon; also seeds of). Again, growing pineapple. Here the water does not persuade completely: a more herbaceous, almost balsamic note opens up, which does not seem to be fully integrated with the rest. The finish is long, balanced, on sweet buttery and fruity notes (pineapple again) and citrus counterthrust. Not a dram to be taken for granted: the nose promises less than what you actually find on the palate. 86/100.

Rather consistent and similar to cask #12, although here the nose is more typically bourbony: we have notes of vanilla, custard, pastries, pineapple cream… Much more sugary than the other, it seems more open and more easily seductive. The spicy component (which here is more ‘green’ and less sweet, going towards ginger and cloves) and an evident citrus and lemony note remain alive. Here too, a sense of brioche, of buttered toast. The palate is drier than the other, with a small explosion of lemon honey and ginger. More wood, notes of liquorice woods. Herbaceous balsamic notes (dried mint leaves). The finish remains very clean and fresh, with a paradoxical mix of pineapple buttery cream and biting lemon core. Difficult to choose between the two: the elements are the same, they just seem to be dispersed with different intensities, and curiously nose and palate alternate the dominant ones, giving a different experience. 85/100 to this second single cask, because we liked the surprise of sweetness on the palate more. Ah, we forgot to add water…

Many people think that Bimber gives his best in Virgin Oak… Let’s see if this is also the case. From the first sniffs, we move into strange, hybrid terrain, a sort of middle ground between bourbon and scotch: we have notes of créme brulée, burnt tart; caramel (creme caramel pudding), notes of sticky toffee. Marzipan, also those Middle Eastern sweets based on dried fruit and honey. Slowly the notes of yellow fruit grow, with coconut and pineapple in the foreground, but also sweet apricots and apples. Sugar icing. Then there are spices to counterbalance the sweetness, between cinnamon and rhubarb. Fresh butter. Delicious, you’d stay sniffing it for hours. The palate is explosive, it has a creamy and chewy body that never steps back. It attacks on a very consistent sweetness and a little more fruity note than on the nose, even though it always plays on the same scents. The apple (sugary apple juice) grows proportionally, which after a while tends to become a fantastic fresh, freshly baked, warm and buttery apple pie. It then strikes a note, which we feel clearly, of… salt! Excellent. The finish makes this sense of warm, slightly spicy apple pie last forever, with a devastating coconut aftertaste. 90/100. Very enjoyable.

This one seems a bit sharper than the other, with a hint of citrus that sharpens the edges: smoked orange and mandarin (what?), orange peel and cinnamon. Another intense note of tinned pineapple and coconut, in all its forms, fresh, ice-cream, dried… More marzipan, more that sense of sweetness. Only after a while, that burnt and caramelized pastry that gave so much depth to the cask #91 appears here too. The palate attacks consistently with the nose, with more hints of black pepper and cloves (but also an almost balsamic note, from dried mint leaves). Paradoxically, although it is 5° lower in abv, this one seems more alcoholic and aggressive. More coconut and pineapple, more marzipan, more honey and dried fruit. Sweetened lemon juice. A bit of juniper, even, and still an unexpected salinity, growing (salted caramel). The finish is quite long, with coconut, cooked fruit (apples) and burnt marzipan – but has anyone ever burnt marzipan? Very good, maybe a little less exciting than the gorgeous #91, but still really great. 88/100.

Bimber’s policy is to choose only ex-Sherry barrels that have contained sherry actually bottled as such – not necessarily ex-Solera barrels, but real barrels, not just seasoned. The nose of this #46 cask seems to indicate this, with umami hints that we have only found in ex-Solera barrels before. There’s like a leather patina, behind which explodes the cooked fruit (plums above all – even ‘normal’, uncooked prunes); then notes of sultanas and acrid red fruit (gooseberries, strawberries). Brown cream, but not so sweet. Balsamic vinegar, a few mineral notes (there’s a dunnage warehouse feeling of humidity, so to speak). The palate is sweeter than the nose, even if there is still an acetic and umami note that, if we wrote down the names of certain Japanese fermented sauces, we would certainly be able to define (no, we have it: barbecued eel in teryaki sauce!, ok, we exaggerated). More brown glacé, then milk chocolate, apple liqueur, sultanas and cooked plums. If we said there was a hint of gentian, we wouldn’t be wrong. The finish is long, all on marron glacé, a return of leather and fruit in spirit. Very good, very particular – it has an old-school feel to it, especially if you think that there is only four years old English whisky in the glass…. 88/100.

Here the colours change, we’re on a slightly more autumnal profile, a bit more ‘orange’ if you get it – but do you really get it or it makes sense only to us? Maybe not. Anyway. The profile remains less open, less ‘pandering’ maybe: there’s a very faint sulphurous scent, but very distant. Then follows an unexpected yellow fruit in spirits, with apples and peaches. All as if covered by a light dusty blanket, with also old brass tools and ‘old metals’, if you understand what we mean. Then, of course, more traditional hints, with a bit of marzipan and dehydrated apricots. The palate is very consistent, it remains equally orange, but overall it is fuller and more convincing. Lots of tobacco on the palate (sweet tobacco). Dried apricot, dehydrated apple and filtered apple juice. Egg yolk and chocolate, with a touch of bitter orange peel. The finish takes up tobacco (sweet pipe tobacco, perhaps flavoured) and combines apple and white chocolate. 86/100. Good, there’s nothing to say: we keep it a couple of points under the other because that one was very particular and strange, this seems more usual to us – even if they are undoubtedly two different whiskies, much more different than the two ex-Bourbon or the two in Virgin Oak.