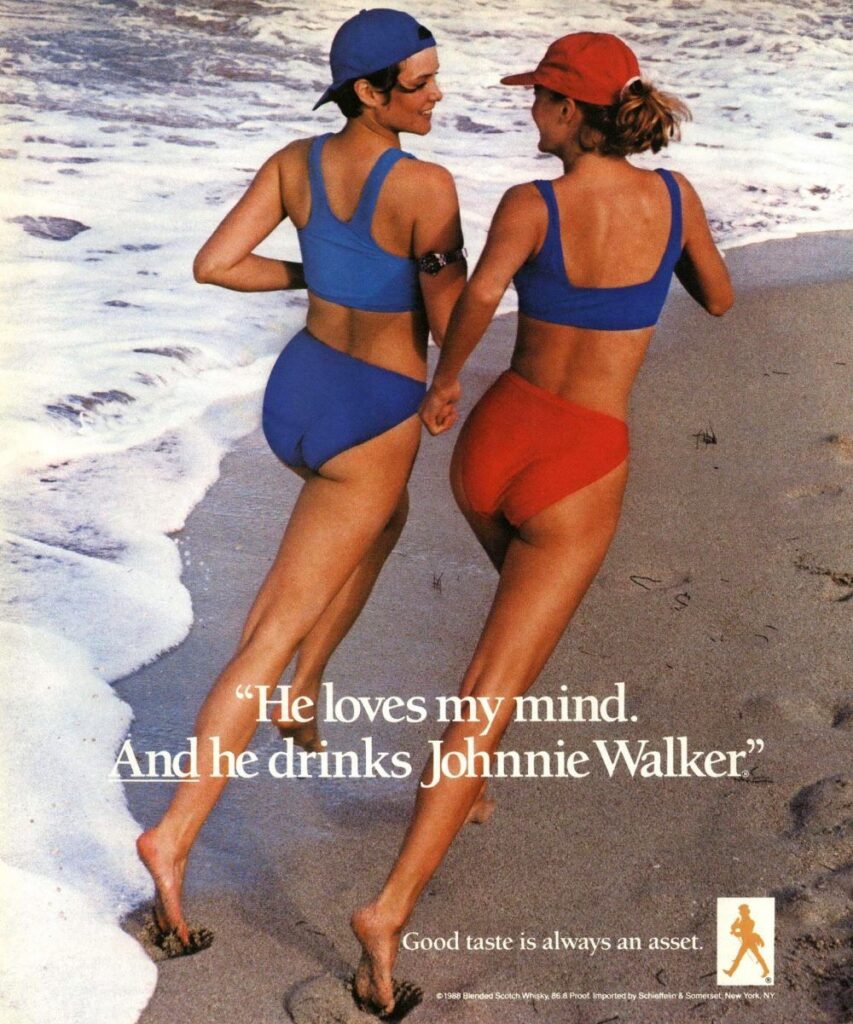 It’s not easy to see him, because he’s usually covered by a trench of lunch boxes, portable refrigerators and bags full of food. But the beach glutton immediately drums up sympathy, because he’s the perfect image of Epicureanism and joyful eating disorders. His station is surrounded by a cloud of gorgeous aromas: buttered toast, tart, red apple, cedar and candied grapefruit. Even if he’s overflowing with rice salad, it smells of aromatic wood, lavender and aniseed, with a touch of lounge, leather armchairs and solid wood.
But you know, gluttony is more a matter of palate than of nose. Although he wolfs down three krapfens and a pizza slice, in the mouth it tastes much more austere and oily (or is it cholesterol?): hazelnut, sticky toffee pudding. Good vibrations for a good fork: caramel crunchy, brioche and pecan nuts until infinity. Full body, maybe just a little overweight. It also goes deep, especially after meals. Only in the finish it suffers a bit from being a blended and he rapidly wipes the slate. So we can all start eating again, come on. 87/100.

“Pape Satan, Pape Satan Alassio”. Dante didn’t write exactly these lines, but anyway… Sometimes this character appears on the Italian coast. Dressed in pitch black, often with combat boots in which unknown ecosystems develop, he arrives on the beach silently, arousing the general astonishment. Straight from Travel Retail, which is a bit like “Gods of Metal” for whisky (it isn’t?), he appears without half measures, in a liter bottle and wearing a t-shirt with torn angels on it. But he arranges his towel, he turns his mobile phone into silent mode, he’s surprisingly polite: a sherried without excesses, he lines up candied oranges, maraschino cherries, raisins and tarte tatin. Everything in its place, without evoking the devil nor biting the head off a raw mullet.
Even the palate asks “please” and always greets, as the neighbors say about the killers. Soft and oily, it doesn’t taste like hell at all. Unless modern demons have fun baking panettone and eating dates, candied apples and nougat.
He doesn’t stay long (also because he’s dressed in black, so he risks liquefying in the sun), but when he leaves he smiles, between sweet and caramel. We cannot be sure if he ends up with other Auchentoshans making human sacrifices in the dead of night, but we must admit he looks like a balanced fellow. Certainly more similar to Winnie the Pooh than to a Berserkr, scary for ferocity and intensity. 83/100.

How many things you’ve seen, how many women you said you’ve conquered… Mythological creature half lifeguard and half pirate capitain, the old man of the beach is multiform: he assumes different identities according to the moment. He’s the historical memory of the place, he knows every detail of the local flora and fauna (especially female fauna). Just ask him, and he will tell you tales of wax and fruit in syrup; how once pineapple and gooseberries gave the joy of the senses. Long time ago here, he will explain to you, there were no resorts and cheap restaurants: once here the nose was a curious symphony of white currants, light flowers and spices from the wood and everything was covered by a metallic light layer, like brass and soot, which made the place magical.
Shiver me timbers, keep on telling, old man! Tell us about your palate so amalgamated and tropical that it reminds you of your travels as a boy; when the fruit in the market was healthy and tasty, not like in the supermarket. Peach, medlar, melon, green apples, flambé banana, lots of lemon. Every wrinkle a whim of the wood, the pipe to exhale a trickle of smoke. So, as he lines up real and presumed memories, the old man’s voice stays under your skin. And when you’re already at home, you still hear the licorice of yesteryear, the propolis of ancient times, and that touch of salt and tropics that fishermen carry around, even if they’re just harmless bobbleheads. Because, between fruit and oak, time and that remote peat, distinguish between truth and imagination is always complicated. Take it easy, don’t look for a solution. 88/100