Waterford, the realm of barley 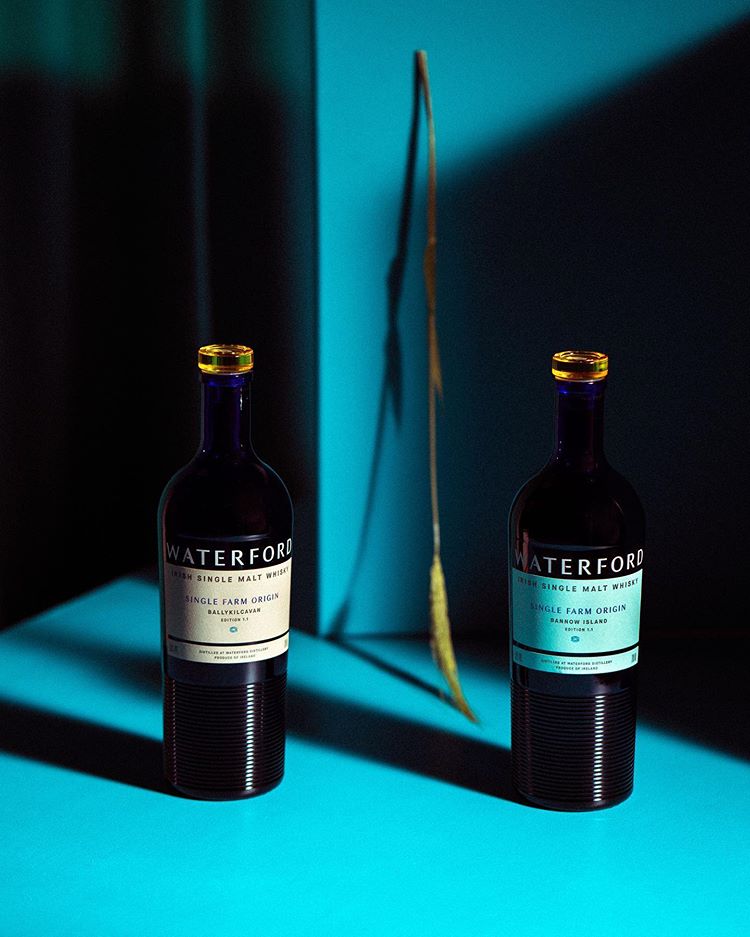 Since the Waterford Distillery website went online about three years ago, we’ve been looking forward to this moment. Mark Reynier, the man who gave a new life to Bruichladdich, after selling to Remy decided to move to Ireland and invest in the cousins’ whiskey, showing the usual foresight. Waterford wants to be an experimental laboratory to study the impact of terroir on whiskey, according to the motto of “terroir, transparency, traceability”: each distillation batch is in fact coming from a single variety of barley grown in a single Irish field, and more than 70 farmers are involved. The website is almost disturbing with so much information it offers to the drinker, and we advise you to take a look there if you want to sink into some delicious whisky nerdiness – be careful, if you don’t have a degree in chemistry and a doctorate in geography you’ll have to make a lot of effort, but it will be worth it. We are dealing with the conceptual art of the terroir here, flaunted in a big way and exhibited with a stripping of the most careful marketing (do not read it as a critic, mischievous you are!, but as a praise: there’s good marketing and bad marketing, and this is good): single farm bottlings, coordinates of the fields, terroir codes, the faces of the farmers, the abv indicated to the second decimal, webcams always pointed at the still house and on the construction site for the new warehouses. Moreover, judging from Reynier’s cover letter, the plan is to study and create ingredients, appropriately cataloged: “after maturing for several years in the best of French and American oak, we believe these component ‘single’, single malts, each one exhibiting its own nuances, will come together making the most profound single malt whiskey ever created”. You can’t say he isn’t confident, right?

The project is experimental and fascinating, and it seems they want to take to a further level what was only set up in Bruichladdich (to a specific question in one of our last visits: do you study the differences between the various barley?, they answered “honestly no”, so, ok) – even if let us rattle off some perplexity. Ok terroir, ok single farm, ok barley varieties: but fermentation? How is it for the single varieties, how does it impact? And then, if you put spirits with different nuances in ex-American and French oak virgin barrels or first fill, how can those nuances be expected to survive? Or perhaps, precisely, are they studying to understand how much all the individual aspects count? Ok, but why then the focus only on barley? And to be fully honest, truth is that we hope to be able to visit the distillery soon to get our noses on site and try and understand something more. Today we taste four samples not on the market: two new makes of the same variety of barley grown in two different fields, two samples of a three year old whiskey from another variety of barley grown on a third farm, of which one is a sample of a single barrel (which type? they forgot to mention) and the other is already the blend of several barrels at a reduced strength. But that’s not enough!, because we also want to taste the first two official releases just released on the market, and already raided by collectors and curious.

Waterford new make Broomsland farm, Mark Browne (11/3/2019, batch #V29320, 71,35%)
Olympus barley 2017
N: very fruity (apple, Regina plum), but the note that stands out above all is tomato juice! In fact, it covers everything else.
P: tomato juice almost becomes Bloody Mary. There is also a strong sensation of brine and anchovy sauce, as well as a sugary sweetness.
F: a little longer, between the acid and the sweet. Grape seed.

Waterford cask sample, Rathclough/Danesfort (7/7/2016-1173 days, cask #4249, 68,81%)
Irina barley 2015
Three years of age, samples from a single barrel (we don’t know which type though). 1173 days of maturation for a barley distillate from the Richard Raftice farm.
N: very different, an unexpected caramel flavor immediately emerges. Then more consonant notes of white fruit (pear, white peach) and something floral, perhaps jasmine soap.
P: here it’s almost impossible to grasp anything other than an indistinct sugary fruit, lemon candy and a colossal wall of alcohol that smells your palate.
F: always on the sweet and intensely alcoholic, that floral note that we liked so much lies submerged by 69 degrees.
The nose was inspiring, it could even seem more particular than his colleague at a reduced strength that we’ll have later. But the ruthless abv annihilates any attempt of analysis, and honestly we played with water but we didn’t have enough liquid. No score.

Waterford cask sample, Richard Raftice (7/7/2016-26/8/2019, batch #V23639, 50%)
Irina barley 2015
Here we talk about a ‘real’ whiskey, even if it doesn’t exist. Cask sample by the farmer Richard Raftice, aged 1145 days in a mix of barrels divided as follows: 35% American oak, 20% American new oak, 25% French oak, 20% VDN (sweet wine). Reduced strength.
N: there is a pleasant, though not surprising sweetness. Cereal first, then white chocolate and white grapes. Impressive is the lack of alcohol (it is diluted) and the fact that at the age of three you don’t get candied fruit monsters. Indeed, it’s quite expressive to tell the truth. Vanilla candle.
P: still pleasant, very drinkable and delicate. Not particularly marked, the mix of barrels has rounded every corner. The new oak gives a note of wood, the American oak brings vanilla.
F: inevitably not too long, sweet and a bit flat.
The class is there and the strength seems to be right, so let’s expect a release around this abv (the first two original releases were 50% indeed). It has the delicacy of Irish whiskey, and enhances the cereal as the project wishes. 80/100.

But let’s move on to the two official releases, just released and already sold out practically everywhere…

Waterford “Bannow Island: edition 1.1” (2016/2020, OB, 50%)
Three years of age, a mix of French and American oak barrels, 8000 bottles produced from Overture barley grown on the (no longer) island of Bannow, now connected to the mainland, on the south coast of Ireland.
N: here come the candied fruits, inevitable. Then comes an intriguing note of nutmeg, perhaps sprinkled on white chocolate. There is no herbaceous note that often comes with young whiskeys, but on the other hand you get a bit of alcoholic notes, solvent. Perhaps a scent of heather, which over time becomes almost jasmine. Icing sugar, as per manual.
P: firmly hinged in the profile of sweetness. Stuffed licorice, still white chocolate, a lot of vanilla and apricot, to give a sour touch. There is also a green sensation, like fern and green rhubarb, and a subtle spiciness: nutmeg again.
F: medium short, fairly sweet (cereal and amaretto) and with a touch of mineral and iodine.
Except for that touch of yeast on the nose, you could say that you are facing an already beautifully structured whiskey. And with some relative complexity, too. The most pleasant of the evening and perhaps also the one in which the terroir – thanks to the coastal birthplace of the ears of barley – emerges more distinct, with that finish on sea breeze that on the website you can also hear, recorded in an audio that immerses you in the coastal atmosphere. It will be suggestion, but for us it is 83/100.

Waterford “Ballykilcavan: edition 1.1” (2016/2020, OB, 50%)
A 3 year, 11 months and 18 days whiskey from Taberna barley grown by David Welsh-Kemmis much norther, above Kilkenny, far from the coast. It matures in 16 American first fill barrels of oak, 3 barrels of natural sweet wine and 12 of French oak. 8640 bottles produced.
N: totally different from the previous one, it starts with very strong off notes, such as wet rag and wet metal (brass). The palette of “dirty” hints is enriched with a cellar air and a growing sulphurous side, as with unscented thermal water. There is lemon, even if moldy, and apricot. Dark dried fruit, type walnut.
P: much more pleasant, the unsettling notes are much lessened. It starts with pear puree and the unmistakable flavor of the new make, to which, however, cinnamon and lactose are added. Someone says rancid cooked ham.
F: again the cinnamon and cream. The perfect suggestion is the resolatte.
Great character and no fear of beating hard without trying to ingratiate the drinker. The nose is difficult to love, really too many heterodox notes for our taste. But on the palate it recovers a lot, and the creamier finish made it much easier and enjoyable. 79/100.

We must confess it was a difficult session: six samples of this kind are not ‘easy’ to taste and review, but let’s say that in the meantime we got an idea. The feeling, by pruning the mixed feelings with which we look at the operation (visceral enthusiasm for figaggine and nerditude; perplexity for the confusion that an excess of information brings, and for the potential painfulness of the thing), is that it is really only about a first step towards something different: the new make are very interesting, the blow samples are unjustifiable, the two bottlings are honestly a little disappointing – but the latter is the fault of too high expectations, perhaps. There will be two elements for truly judging: the first, and the most important, will be the glass, and when we have more ‘definitive’ Waterfords then we will look like his dignified; the second will be to understand how deeply they want to go with research, and how communicable and understandable these fruits will be. Of course, we are happy to be able to follow this path closely, and we can’t wait to visit the distillery.

Recommended soundtrack: The Dubliners – The Waterford Boys. Ok, it was too easy, but how could we resist?