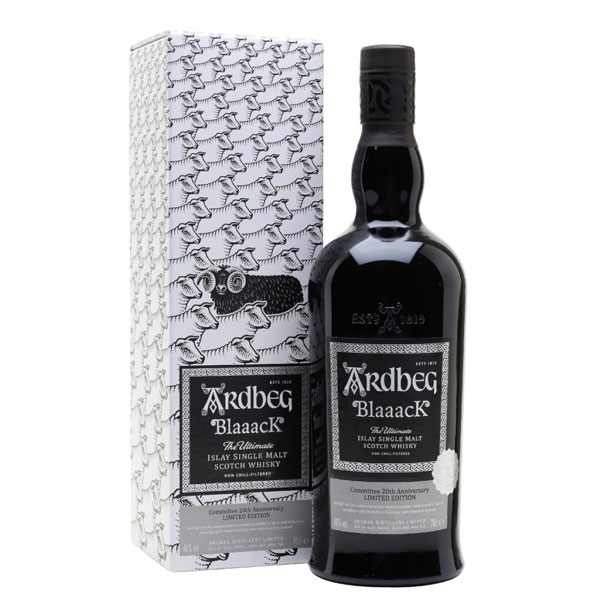 Pardon us if we’re late, but we fell asleep counting sheep on the box. Now we’re finally ready to give our useless opinion about one of the most eagerly awaited bottlings of the year, the Ardbeg Day limited release. This year, it’s raining surprises. And since we’re talking about Western Scotland, it’s raining a lot. First of all, as you already know, all the celebrations were virtual, due to the Covid. Secondly, this release is special because it celebrates the 20th anniversary of the Committee, that brave brotherhood defending the Graal-distillery we all love. Therefore, this year bottling must stand out, like a black sheep between its white, fuzzy friends. We can figure out Ardbeg guys trying to finish the spirit in old haggis or milk tanks… Until one of them had the epiphany: sheep=New Zealand. New Zealand=kiwi fruit: it doesn’t work. New Zealand=rugby All Blacks: it doesn’t work, but at least we have a chromatic clue. New Zealand=Pinot Noir: we got it!
So here we are with this “Blaaack”, the first onomatopoeic whisky ever, celebrating the twinning between flocks from Scotland and New Zealand, where in the 1980s there were 22 sheep per person (now there are less than 6, poor theeeeeey…). From ovine to wine is a short step, so it is from genius to failure. The Committee release is bottled at 50.7%, but we’re testing the 46% release. Let’s see how this ex wine casks finishing works. Usually, they’re rather challenging…

N: mmm. We sound like a cow, while we approach the glass. There’s suddenly a whiff of orange: Orange soda, orange tea, witnessing a tannic side. But please do not think about a winey experience. Actually, the Pinot finishing provides the spirit a juicy, sticky sweetness and tons of spices, most of all Angostura and a lot of cinnamon. The fruit is vague and a bit artificial, like dried apricots and canned peaches. And the peat? It’s here, but it’s like it lives next-door. Grilled marshmallows and smoked meat, maybe glazed, something reminding of burning embers. The biggest surprise is what we miss: the sea. It’s curious for a double-islander whisky, created between Islay and New Zealand. With time, a hint of celery. Mmm again.

P: beeeeh. We finally sound like a sheep, at the very first sip. It’s unexpectedly watery and not compact at all. On the palate, it seems to be in a hurry, it tries to run away quickly. So it starts sweetish (again canned peaches, orange juice and burnt caramel), it slides into the acidic Pinot land (peach peels, unripe sour cherries) and in a while you’re in the middle of the peat. Which is disproportionate, modern and aggressive (charcoal), amplified by a not completely integrated alcohol. You need to wait some minutes to appreciate the best part, that typical mix of ink and blueberries, quite usual in peated malts finished in wine casks.

It’s not easy. Despite this release’s packaging is one of the best in the LVMH era (perhaps we would have avoided the ram’s photo on the back label…), we need to judge the liquid, not the box. And we’re not convinced at all. The worst problem of this whisky is that it’s disconnected from the beginning to the end. The extreme, orange-y sweetness and the exasperated peatiness goes separate ways, competing who shouts the loudest. In Lombardy, a popular proverb says: who shouts loudest, it gets the cow. But we’re not talking about kettle, but about sheep and whisky, which shows a not particularly sexy mouthfeel, too: at the same time weak of body and extreme in flavors spikes. The last limited releases weren’t unforgettable and they were super sweet and simple, but they were also pleasant. Here, the pleasantness sadly stops at the packaging stage. 79/100.

And last but not the least, a Whiskyfacile favorit

For the second post on our young and beautiful dis

Our first three posts of the year are dedicated to

Last but not the least, here our review! Italian