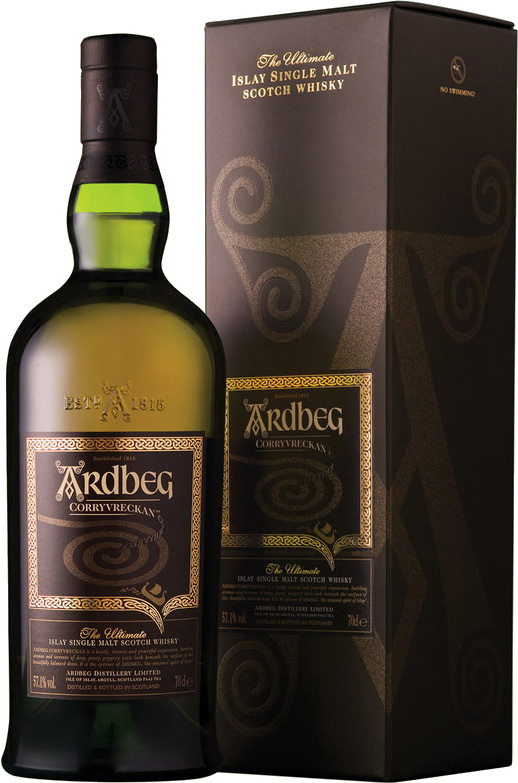 This is it, this is it! Tomorrow Ardbeg is going to launch Auriverdes, the latest novelty from the distillery owned by LVMH. A newborn that should link the Scottish alcoholic desires with Neymar’s fantasy (“Auriverdes” refers to the Brazilian football shirt)… Will the result be legendary like Archie Gemmill’s goal against Holland in ’78 or will it be disgraceful like Adriano’s hard nights?
Thinking about that, we taste the last whisky from Ardbeg’s core range, the Corryvreckan. It’s a NAS mix of casks and it’s cask strength. When it was released, five years ago, it took the place of Airigh Nam Beist, that we simply love. Kick off, let’s drink.

N: rather alcoholic, as expected. Forget those notes of lemon and marzipan we found in Ten and Supernova 2010 and replace them with apple, burnt sugar, orange peel and tons of licorice. Generous whiffs of wood… The sherry influence is more evident here and even the peat is quite different: there’s still a pollution effect, but followed by leather, gunpowder, coffee beans. A brackish splash, not as clear as in its brothers. With water, the seaworthiness surprisingly emerges over a carpet of embers and licorice.

P: what a wooden bang! Comparing to the nose, it reveals its nature of “enginereed” whisky. A clear emphasis on casks, even too much. It’s wildly astringent, reminding to brown sugar, tamarind, cola, pipe’s smoke and orange marmalade. The water improves it enormously, indeed: the sweetish becomes sweet and everything is now rounded and balanced. What a huge difference!

Undiluted, despite being a good whisky, puzzles us: it tastes sweetish, woody and very, very “enginereed”, betraying the distillery’ soul (lemon and seaside are too subtle, a serious offence if you think that Corryvreckan is a whirlpool off the coast of Islay). With some drops of water, nevertheless, improves immensely: 87/100 for the Ardbeg’s core range expression we love the most, with Uigeadail and one step ahead the Ten. It’s like the young Adriano, the striker who impressed Italy before he got wasted.