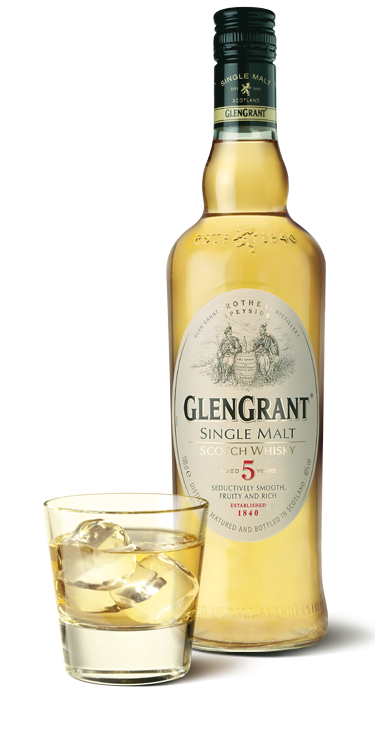 The question about why we review only rare or gorgeous whiskies valued with more than 80/100 need to be answered. About votes, here an explanation of our valuation method is available. And about good whiskies… Well we select (and pay) the samples, so we tend to choose malts that we can potentially enjoy, because whisky for us is a passion and not a job.
Anyway, if your dream is to read tasting notes of easily accessible whiskies, we aim to please: Glen Grant 5 yo. Yes, itself. That whisky the vast majority believe to be a blended. That whisky fixed in your brain since you were children because of an obsessive TV commercial (and do not say that those vintage ads were glorious! No, they were SCUM!). In that commercial, a pedantic businessman, proud of his cosmopolitanism and of his big Hollywoodian jaw, impressed friends, lovers, ex lovers and future lovers with his ability to recognize the “light colour and clean taste” of Glen Grant.

Probably a semiologist with a sociology habit can explain why that commercial was the perfect preview of Italy’s decadence. Anyway, if you take a look to the comments below the video on Youtube, you can understand how Michele became iconic and how bad is Glen Grant’s reputation in Italy. In another commercial, Michele – the true connoisseur – recognised his favorite malt in spite of using huge tumbler glasses in which would be impossible to distinguish between Brora and gasoline.

Then, during the 90’s, the mystical turn, on the heels of movies like Braveheart or Dances with wolves. Michele has been closed for hours in an airplane toilet with the hostess he had just seduced talking about whisky (who hadn’t???); so Ramazzotti’s advertising creatives thought that some evocative landscape and a soundtrack (every-kind-of-music-as-long-as-it-reminds-Enya-and-a-movie-set-in-an-undefined-and-charming-past: it was Capercaillie, at least a Scottish band, ed.) would have been enough to turn Italian customers into Celts. We don’t know much about sales and volumes in those years, but certainly Celts were trendy: in fact the Lega Nord became popular in the Italian politics wearing helmets and talking about the Celtic soul of Lombards and Venetians (!). And all this foolish talks without even drinking a whisky!

After that – always waiting for Michele to exit that f***g airplane toilet – the advertising creatives choose the son of the great Italian actor Vittorio Gassman, Alessandro, in the role of Michele. So, the new commercials are even more pathetic. Let’s forget it. It was just to explain why Glen Grant – the only Scotch distillery owned by an Italian company (Campari) – has always been present in our houses and in our imagination: in spite of a popularity inversely related with its bad reputation, its whiskies are often magnificient, and we know it. It’s time to taste it, but with the correct class. Colour: light. Taste: clean. It’s Glen Grant! Ops, we did it, sorry for that… Colour: light straw.

N: carefree youth… The levity of the whisky matches with its simplicity. Beyond the predominant malt, there’s an impression of candied fruit (pear), apples, yellow fruits (white peaches? Ok, but we said “yellow fruit”… are we affected by color blindness?). A thin layer of honey and vanilla. Everything is very sugary, soft and perfumed. Hints of almond and fresh flowers. A subtle lemon, or is it bergamot? It’s not bad, rather basic and openly young, but pleasant.

P: the body is rather watery, probably too much. It tastes even younger than in the nose, the new make’s influence is now overwhelming: yeast and candied fruit. Again almond, with the nuts’ notes stronger now. Malt, malt, malt. It’s not too sweet, but with a general sense of vanilla. Not complex at all, and obviously not remarkable for its intensity. But it’s really drinkable, that’s its purpose.

It’s 10 euro, what more could you want? It’s certainly a young and simple whisky, light, perfect as an aperitive, maybe remembering the light-hearted Eighties, when Italians were happy without a cause but with a big Hollywoodian jaw: 77/100.

Recommended soundtrack: Sandra – In The Heat Of The Night