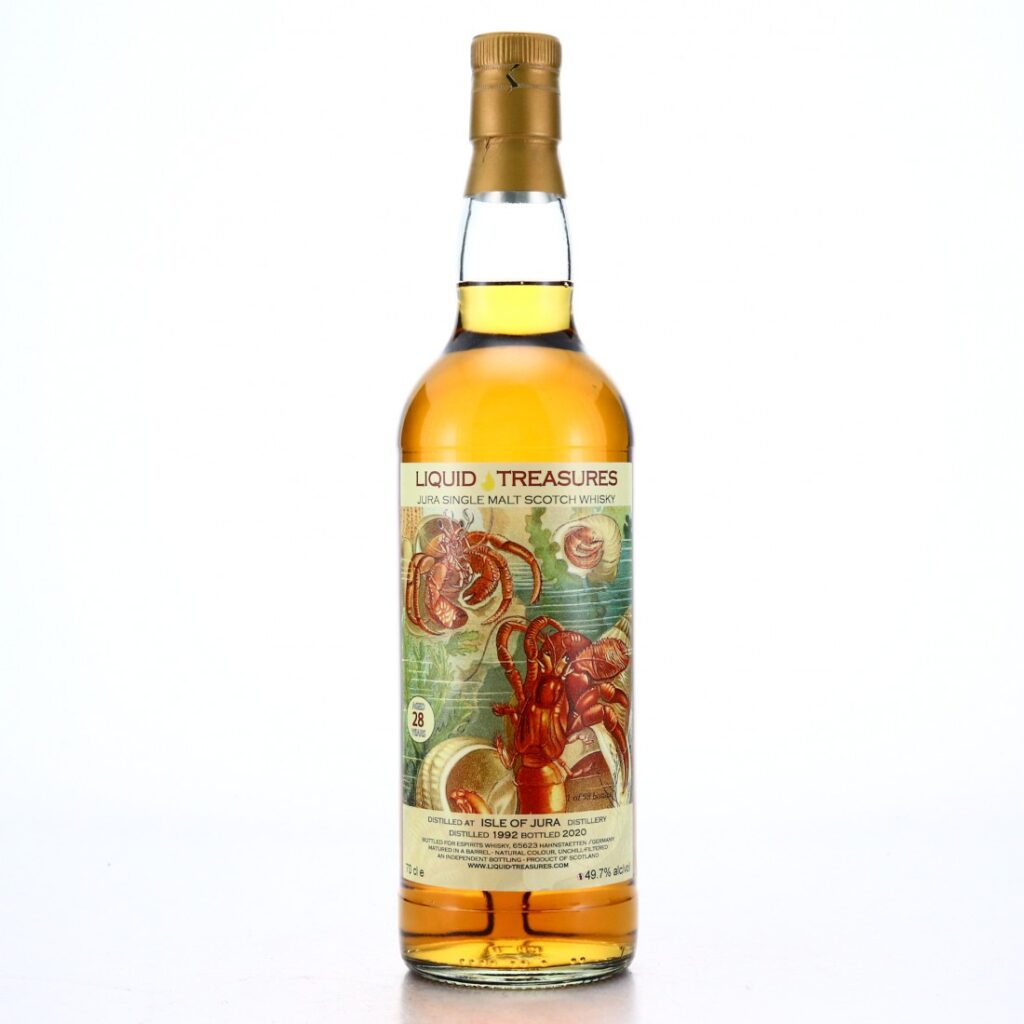 We all know, and it goes without saying, that Jura is not exactly Scotland’s sexiest distillery: it certainly pays the price in terms of both quality and perception to the comparison to the brands on the opposite side of the island, so one always tends to expect something more “close to those peated legends”. In recent months, however, a number of casks of 90s Jura have begun to appear at the most à la page independent bottlers, abundantly over 20 years old, often almost 30 years old, which have earned notes of merit from equally à la page bloggers. Who are we, the loser friends, the ones who don’t get invited to the junior high party, who ask for Fonzies and have avanzies (ok, that was only for Italians, apologies)? Well, come on, then: to put an end to this injustice, today we’re going to taste an ex-Bourbon single cask from Jura in 1992, selected and bottled in 2020 by Liquid Treasures, a German bottler recently imported by our friends from the Milano Whisky Festival.

N: very particular, very interesting. There is an initial patina of ‘old malt’, almost with notes of oxidation, with a hint of brass, old paper, a slightly damp cellar feel, that sense of ‘old man’s skin’, of grandma’s house – if you know what I mean. Dusty pout pourri. But then there’s a caramel, or rather soft toffee, banoffie pie, Rossana candy… All with balsamic veins, of eucalyptus, or rather of dry rosemary. Decidedly unusual, pleasant and elegant.

P: uh, here it is even stranger but really good, and consistent in its strangeness. Full-bodied and chewy, really satisfying. There remains an overall sense of rosemary needles soaked in melted Rossana candy (don’t try this at home). Aromatic Eritrean paper, but still old paper, abandoned wooden furniture, old spice cupboards. Honeycomb of honey. There is a distinct sense of ‘old’, here too we find notes that seem to come from a whisky that has been in the bottle (not in the cask, eh, mind you) for 40 years and forgotten there. More caramel, toffee, Rossana candy, exhausted fruit (what the…). Sugary tea, or rather: tea in which you’ve dropped far too much honey (but balsamic honey).

F: long, still consistent, between the old-fashioned sweetness, a bit of dust and that balsamic boost we find right from the start. Maybe cumin, certainly nice spice. Tobacco, too, and a memory of orange liqueur. It tends to become increasingly bitter, sip after sip..

Oh, we liked it. It’s certainly not an everyday whisky, it’s certainly not a whisky for all palates: but it’s just freaky enough to win our hearts. If it hadn’t been for that bitter and tannic part that tends to grow a little too much as it goes along, we might have gone even higher: in the meantime we stop at 89/100, and take home the uniqueness of the experience. Even in its diversity, something that reminds us of Valinch & Mallet’s Clynelish-that-can’t-be-said…