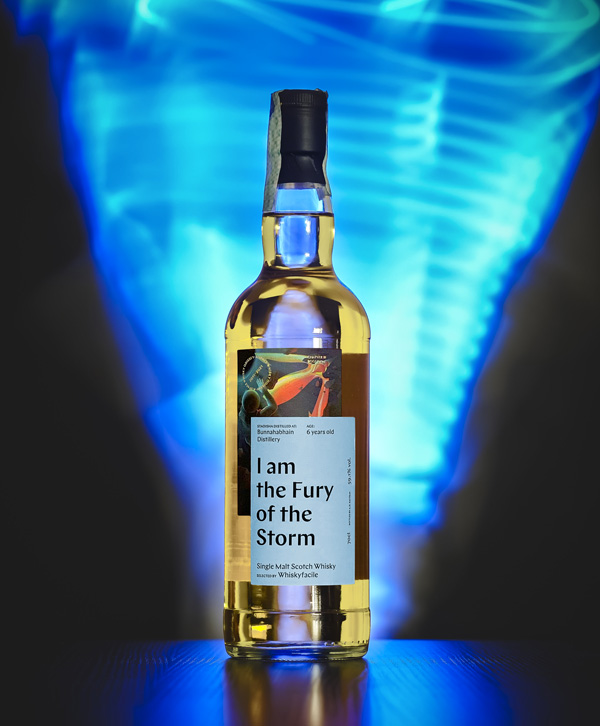 The first bottling we selected for Whiskyfacile’s anniversary was the last to arrive – and it is perhaps a paradox, if we think that it’s a whisky that has been in glass for over a year now… When we started thinking about this anniversary in 2019, we had chatted about it with one of the people we were closest to in the whisky world, namely Maurizio Cagnolati, founder of Beija-Flor who sadly passed away last November. He put us in touch with A.D. Rattray, a well reputed independent bottler, who offered us a series of casks: among the samples we received, this peated Bunnahabhain, only 6 years old, immediately stood out. A half-barrel of it was available (146 bottles of ex-Bourbon Hogshead #10536), distilled on 16 October 2013 and already bottled: it had been optioned by a client who, in the meantime, had financial issues and left it there. A stroke of luck for us: as soon as we tasted it we fell in love, and even though we knew it would be put on the market almost two years later than the bottling (which took place in November 2019) we had no doubts. Below we try to explain why… The colour is very clear, like a pale white wine.

N: first of all, it confirms the stormy qualities that made us think of Poseidon: seawater but also a deeper flicker of brine. Alongside, there is a riot of peat: starting with smoked cereals in huge quantities, then burnt rosemary and finally tar. And from the intersection of these two souls emerges a clear image: those little boats soaked in pitch and salt water… Fragrant bread with its yeast, but also milk bread covered with delicate icing sugar. The fruit is abstract and limited to shades of citrus. The distillate is naked and king, the cask hasn’t given so much: all that remains is the pure elegance of Bunnahabhain’s spirit. What a show, considering that the 59 degrees are only theoretical and never perceived.

P: …and here too we are left with the theory and do not go into practice: the abv makes the flavours explode while remaining resoundingly drinkable. It opens again on peaty barley grain and burnt herb bread. Again pure and very clean, sea and cereal. Even though the peat is quite tough and acrid (embers and ashes), paradoxically it remains clear, round and primordial. This is helped by an underlying sweetness that is all the result of the spirit, between candied lemon and icing sugar again. We forgot one detail, but the second part of the palate reminds us of it: the savouriness, reminiscent of certain seaweeds. With a drop of water it becomes a salty bread juice, very tasty.

F: long, with acrid peat smoke turning to chemical and burnt bread with a salt crust on top.

The strength of this whisky lies in its impressive solidity, as indomitable as Poseidon’s desire for revenge. It immediately struck us as the prototype of the young Islay single malt: sea, peat and barley. Full stop. Because if this is the quality you don’t need much else…. A sort of noumenon of the island’s spirit, a pure and purely ideal version – but, thankfully, with a very, very concrete phenomenal version. Unfortunately this Staoisha, which was the one with the most limited run, is not yet for sale individually, as we had a huge last-minute problem with the labels (we’ll tell you all about it in the next few days): for now, you can only buy it in the complete set, and it will be shipped as soon as we have it in house.

Recommended soundtrack: The Doors – Riders on the Storm.