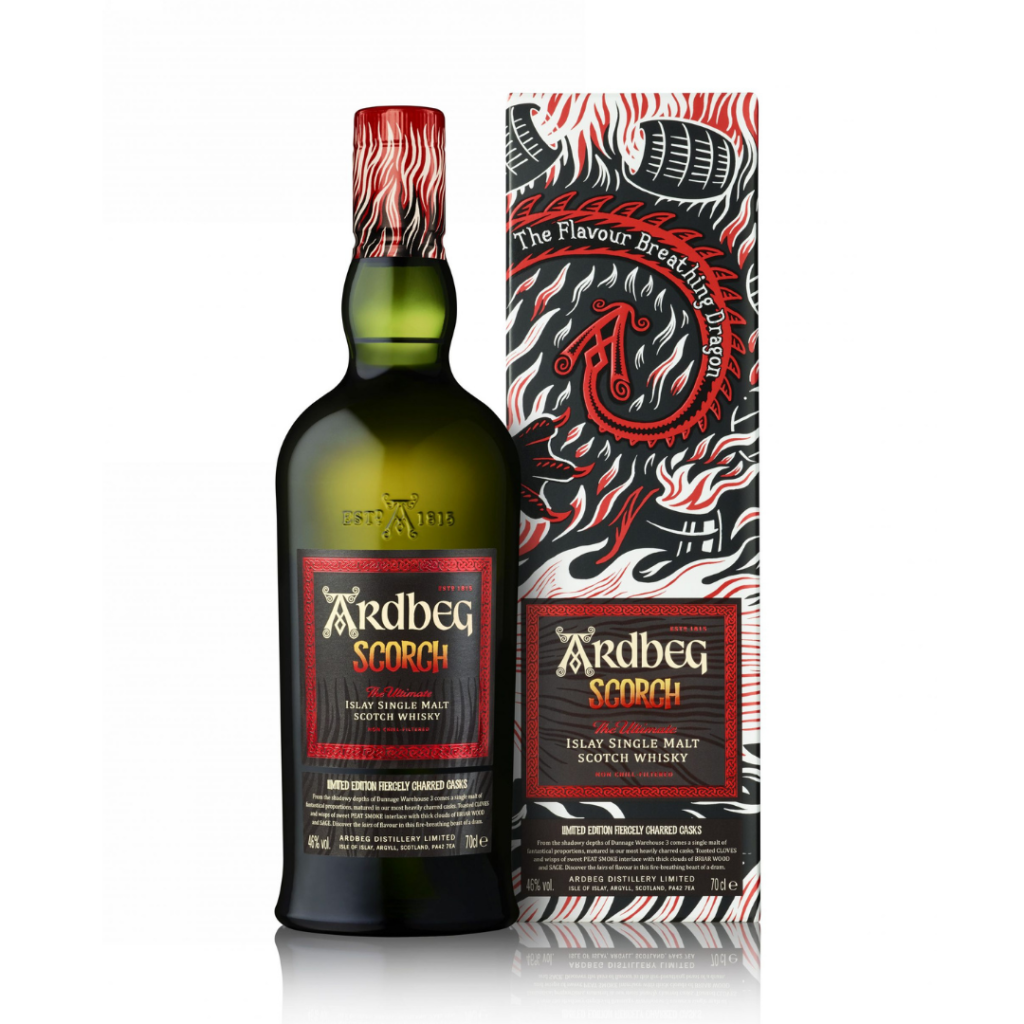 Thanks to an anonymous and mysterious Scottish bird we’ve been able to get our hands on the new Ardbeg special bottling, called “Scorch”: the official release should be next week, but since we had this stroke of luck, we can’t help but review it immediately. If we were real jerks, we’d tell you that we’re reviewing it as a “world premiere”, but since we’re not, we’ll avoid it – and we’ll also avoid telling you the story that, like every year, surrounds Ardbeg’s annual limited release, and which, to be honest, this year seems particularly sober if compared to the past. This is a NAS, as usual, matured in Ardbeg’s evocative dunnage warehouse n.3 in “heavily charred” barrels. We expect an Alligator encore, let’s say, and Alligator was one of the better examples in the recent history of these releases. Andale!

N: well, that the casks were heavily charred is evident right from the start: the peaty component, obviously present, is almost squashed by the creamy, vanilla notes that envelop everything. Custard, caramel, or rather warm toffee, banoffie pie, chestnut cream, even something of an hyper-ripe fruit (caramelised coconut, sugared pineapple on the barbecue): a sense of sweetness very full and deep, very ‘brown’. The whole thing is, however, obviously set on fire: and in fact the peat isn’t really acrid, as it is more on ‘burnt’ notes, with burning wood, bonfires, sweet pipe tobacco, leather. The citrusy notes are perhaps just orange peel soaked in caramel or milk chocolate (an aberration, isn’t it?). After a while a note of sea air pops up, or rather the smell of sea in winter. Not bad, very strong, made up of just a few nuances but a lot of power and intensity.

P: the body is light, very drinkable, not chewy – chewy, however, are the tasting notes, still made up of caramel, butter biscuits, toffee, dried fruit and honey, boiled chestnuts. Even something reminiscent of strawberry jam… All very ‘burnt’, of course, with the smoky component in evidence, which again reminds more of a bonfire, of burning wood, than of burning peat. Pineapple and peaches in syrup. A reminder of the sea, which we would sum up with certain glazed and barbecued fishes of oriental tradition. It also tends to be quite medicinal (antibiotics).

F: long of course, here with a finally acrid peat and again medicine (always gauze and antibiotics), but everything is steeped in a pot of cooking caramel, heated by a large wood embers. Sweetened ash.

Now, as always, you can’t say this isn’t a good whisky: it is, it’s pleasant and easy to drink, and in fact in many ways it reminds of the Alligator (which, we now discover, we’ve never reviewed!, this must be remedied soon: it’s an appeal to our readers!), and this is good news. Very sweet, not particularly complex but really drinkable – let’s stop expecting the sharp, nuanced and marine Ardbeg of the past, it’s a different matter now. Then we’d like to copy&paste all the comments that every year, as punctual as the accountant calling you for the tax declaration, we have write at the bottom of the reviews of Ardbeg limited releases for Ardbeg Day: nice, but if they costed €30 less no one would have anything to say about it. A sweeter and ‘heavier’ version of the entry level drams, for an honest 86/100.