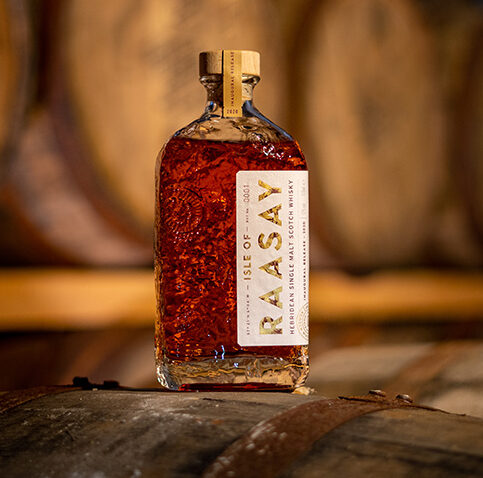 Raasay distillery is one of the most highly regarded gems within the new breed of Scottish distilleries which recently started production. It is located on the homonymous island close to Skye and it is owned by the R&B distillers group (Alasdair Day and Bill Dobbie). Last year Raasay released its first official bottling, which immediately became a prime example of how the speculation of the so-called “flippers” has now reached aberrant heights: on the same day of its release, in fact, bottles were already being auctioned off at unreasonable prices. It may be the market, honey, but we are not great fans of it. After this moralistic aside, we can finally taste this famous inaugural release: a single malt “slightly peaty” aged for three years in ex Bourbon barrels and then finished in Bordeaux red wine casks, bottled at 52%. All very unusual, and therefore interesting. They produced 7,500 bottles and we find very funny and enlightening a comment we heard about the packaging: “It looks a bit like the bottle of Amaretto Disaronno”.

N: a provolone sandwich at the Autogrill, with cocktail sauce added! Nice and fat and stinky, very cheesy and umami. What a character! Then the red fruits come, in the form of currants, fresh rhubarb, pink grapefruit peel, with even a balsamic hint. Alongside, there’s a sense of damp leaves, which often comes with the ex-red wine barrels. Very suggestive, peat, tannins and the plump nature of the distillate create a kaleidoscope of “savory” sensations. Even some myrtle pops up! And with time even a distinct feeling of manure or cattle.

P: very bold, exaggerated and over the top. The wine cries out louder in comparison to the nose, actually it creates in the mouth the exact feeling of a glass of red wine (but Burgundy and not Bordeaux, to be annoyingly pedantic!). There’s also a not-so-pleasant sense of bottle-refermented wine, but fortunately it’s not too intense. Lots of blood orange, black cherry, red grape, which is probably the most intriguing part. The peat takes two steps back, but remains in the background, still on the tones of barbecue sauce, bacon and smoked scamorza cheese. Gunpowder and salt.

F: sour, still distinct currants and salt in crescendo. Soy sauce, alternating with the sweetness of the red fruits.

We were very curious to taste it, we missed it last year, but thanks to Fabio Ermoli who imports it we can finally bridge the unforgivable gap. Let’s start by saying that if everyone were so brave, the world of Scotch would be even more fun: you need to be quite fearless to bottle a 3 years old red wine as the first release. And we like joyful kamikazes. The nose is a great example of the distillery’s unique DNA and it took us higher. On the palate, we lowered the altimeter of our enthusiasm, with that marked influence of the red wine, not fully integrated. Overall, it’s a whisky of great character and the opposite of the easy ones. It will divide the public, but we foresee great potentialities: 85/100

Recommended soundtrack: Def Leppard – Me and my wine