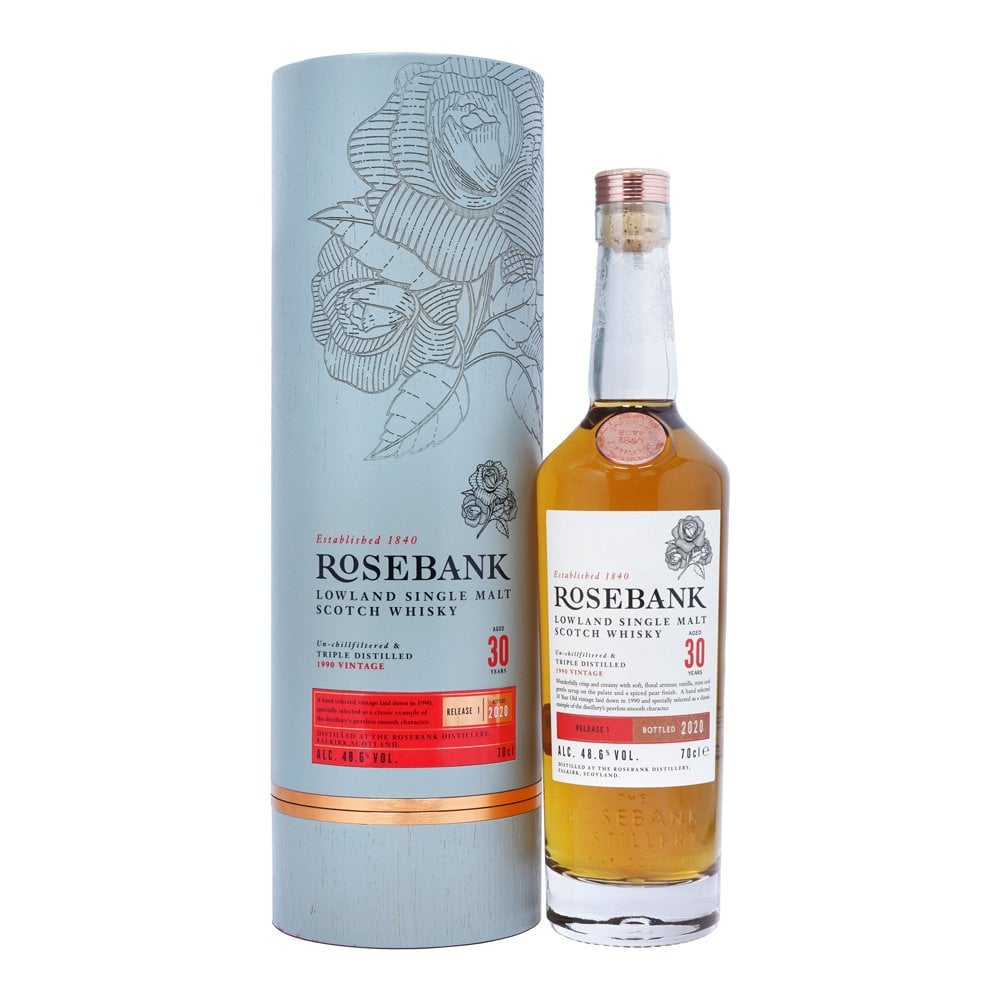 Drums roll and trumpets blare, the sleeping giant has awoken. Rosebank, the fetish distillery in the Lowlands that closed in 1993 in the midst of ‘whisky loch’, is back. Bought in 2017 by the Russell family of the Ian Macleod Group, who took over the brand, cask stock and ruins of the distillery from Diageo, the Camelon facility has been undergoing restoration for three years. In fact, looking at the vintage photos and renderings, it would perhaps be better to say that it is being completely rebuilt.

But while we wait for the first barrel of the new production to be filled (around September 2022, and it will be a refill, to be precise), last October Rosebank launched the first annual edition of the new course: a 30-year-old distilled in 1990 and matured 62% in sherry butt refill and 38% in bourbon hogshead refill. A total of 4,350 bottles were drawn and one of these, thanks to Rossi&Rossi who import it to Italy, was opened during an online tasting with the guys from the Milano Whisky Festival.

Gordon Dundas, brand ambassador for Ian Macleod distillers, satisfied the voracious curiosity of the crowd and revealed several details, which your reporters have noted down and will list in no particular order: the stock of old casks contains liquid distilled from 1989 to 1993; every year until the launch of the first whisky distilled in the new plant (probably 2030) an expression from that stock will be released; the stills, dismantled by the copper thieves, have been rebuilt according to the original designs by the same company; the style will replicate the traditional one, i.e. a mix of lightness given by the triple distillation and robustness given by the worm tubes; in the new distillery, besides the idyllic rose bushes on the banks of the Forth and Clyde canal that give the name to the brand, there will be a visitor centre but no malting floor; the production will be about 600 thousand litres per year.
End of the informative preamble, let’s taste, by golly!

N: a moment of emotion, a nose like this does not come along every day. Vibrant and delicate at the same time, it opens with crisp, fresh fruit that brings to mind carambola, litchees, citron and lots of white peach. The fruit goes hand in hand with a green dimension of spectacular vivacity, alternating suggestions of cut grass, lime and perhaps sage. In this gentle freshness – which reminds one of us in the full poetic vein of a young boy – is the floral soul of the Lowlands: white flowers and the rosewater of certain Middle Eastern pastries. By the way, to add further complexity, other worlds must be added. For example, a sense of red fruits (the sherry casks, though not at all intrusive), like wild strawberries and those Turkish or Israeli pomegranate jellies. But also a rising creaminess that makes us cry out for dear old bread-butter-and-sugar, our snack of champions. At the end, as if on the horizon, there is an idea of wood and nuts. Miraculous.

P: the attack is unexpectedly spicy and a little alcoholic, driven by the wood from the barrel. A kick of spices (ginger) initially fills the palate. But it is really only a moment, because then it returns to the gentle and elegant fullness experienced on the nose. Again white fruit (pear and peach), to which some ripe grapefruit is added. From here it takes on the sumptuous amalgamation that only time can provide: creamy (“pink pepper cream”, whispers a deranged man who is evidently ashamed of this, although he may be right), chewy, with a sweetness of almond candy, meringue and vanilla. The most striking aspect is the tension. At thirty years of age, it is still a snappy palate, not still boiling as is often the case. And as we enjoy the buttery sensation, what we recognise as Rosebank’s trademark emerges: an oily, vegetal sense between olive oil and almond, just enough bitterness to balance the sweetness.

F: not endless, but rather long, clean and played out between a sweetness of vanilla toffee (here given by the cask) and that bitter touch of citrus albedo.

Needless to say, this is a whisky of rare elegance and rare character, where the identity of the distillate manages to prevail over time and wood. Impressive is the liveliness of all those fresh, fruity and herbaceous notes that are usually sidelined by secondary scents. Here, on the other hand, they remain the absolute protagonists and give us a stunning nose. If anything, the attack on the palate is the part that convinced us the least and in general the taste – though excellent and refined – seemed to lack a touch of extra complexity. This is 91/100 heaven, where elegance rhymes with substance.