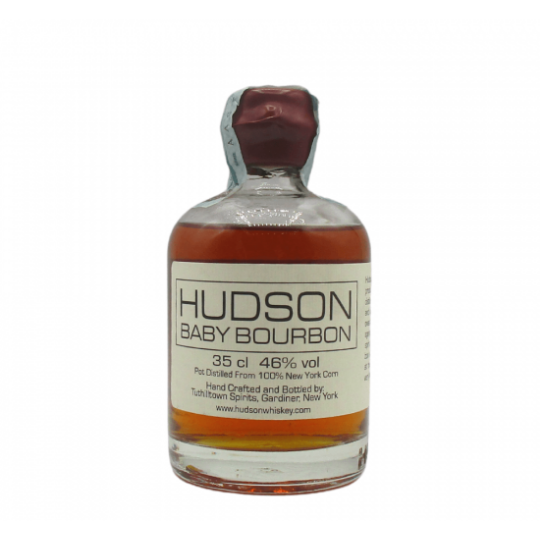 The Hudson whiskey range, churned out by Tuthilltown Spirits Farm Distillery of New York State, is a bit of a Holy Grail for American whiskey enthusiasts. The small 37.5 cl bottles have in fact become iconic in a short time and legend says that the liquid is excellent, one of the highest examples of the great wave of American crafting that has been mounting for years. We finally came into possession of the object of desire, Baby Bourbon produced from corn only, grown in the state of New York. The specification of Buorbon requires at least a 51% of corn in the grain mixture, some go further, but a 100% corn is really a rare thing. The aging method is even more peculiar: they use only 4 liters micro-casks stimulated by the sound of loudspeakers, whose vibrations shake the liquid during the permanence in cask, which we imagine to be however short. That’s crazy!

N: wow, this is really atypical, delicate and fine. Astonishing hints of dried flowers and almond oil, almost on tiptoe. Then coconut (pina colada?) along with dried apricots, plums and medlars. It reminds of the scent of sour fruit, really persuasive. Finally, a lot of corn, but without recalling an extreme sweetness.

P: and from the raw material the palate starts again: corn bombs and a very interesting game of alternation between sweetness and acidity. Another floral part (violets), almost prevalent, that comes to refine. The body is quite slender, compared to many other muscular bourbons; it is also not very spicy. The fruit is ripe, sweaty, between plums and coconut.

This Hudson may be Baby but in the bourbon category it seems a giant to us. To our taste, it seemed able to offer delicate suggestions, but still exotic and vibrant, absolutely not stereotyped (vanilla and banana anyone?). It also has the merit of putting the raw material in the foreground, partly transforming it into something better. For us it is a well deserved 87/100. In Italy you can also find him on Acquavitae.