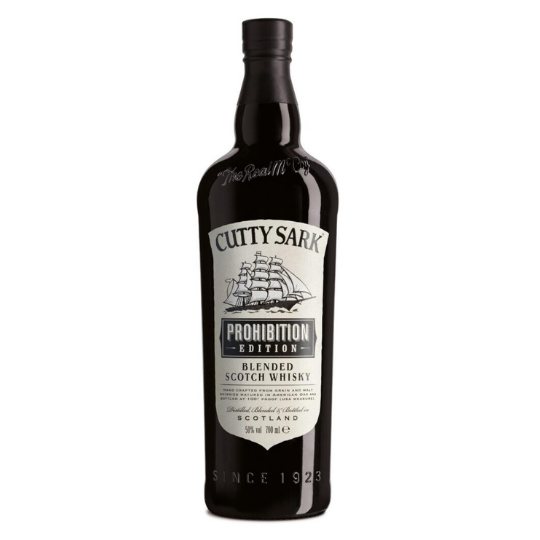 Anyone who went to London during his youth will have gone to Greenwich to take the photo while crossing the 0 meridian. Just outside the Tube station, anchored in the Thames, there is a splendid sailing ship: that is the Cutty Sark, which in Scottish is more or less a “camiciola”, a petticoat, mentioned in a work by Robert Burns. On the label of the blended whisky of the same name, however, there are no vests, but the famous sailing ship itself, which in the meantime has been overtaken in popularity by the whisky itself, created in 1923 to challenge J&B and become the most drunk in the USA. The brand has changed hands more than once, most recently in 2018, when Edrington sold it to the Frenchmen of La Martiniquaise-Bardinet. The basic expression, the yellow-labelled Cutty Sark, we’ve never tasted and vituperate ourselves. To atone, let’s try the Prohibition Edition instead, a 50% version with a black bottle, a tribute to Bill McCoy, the legendary bootlegger who invaded America with whisky and rum from his boat off New Jersey during Prohibition.

N: the first suggestion is whole-wheat toast, fragrant. Then a drizzle of smoked cereal, which stops well before the peat. Dried fruit galore (hazelnuts and especially walnuts) and liquid sugar. The fruit is there, but it is neither exuberant nor exciting: plantain and super-ripe yellow apple. If you look closely, there is a hint of mineral, albeit in the background. The nose is either a blended with an excellent percentage of malt or a weak single malt. The higher-than-usual alcohol content does a lot to support aromas that would normally be more subdued. With time a touch of enamel emerges, a bit like that of an Ikea wood veneer.

P: here all doubt is dispelled. The blended soul emerges together with the sweet part, now enveloping and immediately dominant, with vanilla and caramel. There is still some polish, perhaps a little honey and hazelnuts taking the lead. The soft grain notes are all well aligned, but the degree supports the body, otherwise a bit thin. The only eccentric flicker is that mineral touch, perhaps pebbles? Industrial apple juice, breakfast cereal with undefined dried fruit.

F: evanescent, a sticky sweetness and a touch of bitterness remains, reminding us of a Speyside distillery we don’t particularly like.

Mind you, the experience is not at all unpleasant, and if we were to put 10 euros on it we would say that the percentage of malt here is not insignificant. That said, it remains a blended in the lower-middle price bracket, so it should be judged as such. In its defence – apart from a certain simplicity of descriptors – it must be said that thanks to its alcohol content it is never watery or boring. The ending is what it is, but from Fabio Volo you expect to read a few pages of mindlessness, not the Recherche… 81/100.