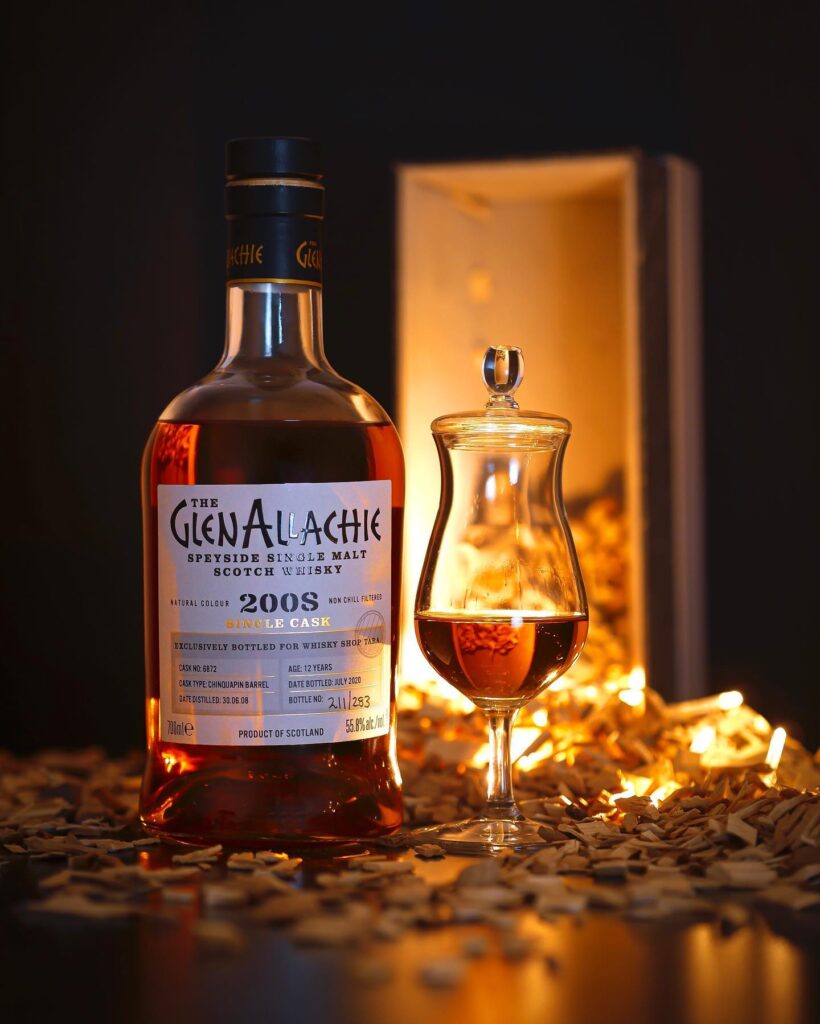 A specter is haunting Europe, and no, it’s not what you think – it’s Chinquapin wood!, which immediately inspires a lot of sympathy, calling itself like an Eskimo character from a Mickey Mouse or Tintin story. It is a variety of American oak that is famous for giving particularly sweet notes and for its adorable tendency to let out a lot of liquid over time – it became something in the whiskophile chronicles because Billy Walker used it for a series of bottlings that are hitting the European market in recent weeks. We are vicious people, we don’t just want one single cask, we want two! What’s the point of tasting two sister casks from GlenAllachie, one exclusive to Tara Shop in Munich (#6872) and the other part of the range of single casks for Europe (#6873)? Nothing but our well-being – and that’s all we care about, so get over it and let’s get on with it.

P: almost non-alcoholic, it attacks very fruity, with bowls of fruit in syrup (peaches, but also pineapple – and even apples, even if we have never seen apples in syrup – Uomo del Monte, give us some money!), honey, muscovado sugar. Great growing spices: nutmeg, cinnamon.

Very loaded and marked by wood: this makes obvious sense, and is consistent with the choice to use such a wood. It is not fully in our taste, but it is in general our problem with American woods when they load so much – the result always seems to us a hybrid between a scotch and a bourbon, even if we can’t help but recognize that it is a well made whisky.: 83/100.

N: consistent with the other, it seems a little more balsamic and elegant, even if we play definitely in the same category. Flambé banana, toffee and pecan walnut, mint veins.

P: Here, too, it is a little less of a whisky for wood-suckers, in the sense that wood tends to stand a little further apart and the spice component tends to become much more contracted. There is more chocolate, and there is also a lot more fruit (always peach). A floral hint of violet (almost like lavender – not really persuasive in reality). Remains fresh with a pleasant balsamic part.

F: buttery, too, with persistent fruit and spices (but less so than in the other). Still a floral thread.

We’re talking about two real sister casks and the differences are really nuances, details that can be recognized perhaps only thanks to a head-to-head comparison: this single cask has the same qualities and the same defects as the previous one, in general terms, but we reward it a bit more just because it seems a little more nuanced, more elegant – a little more scotch and less bourbon, we can roughly say. Neither of the two is our ideal whisky, neither of the two we would ever refuse to drink: 84/100.

Recommended soundtrack: The sisters of mercy – Lucretia My Reflection.