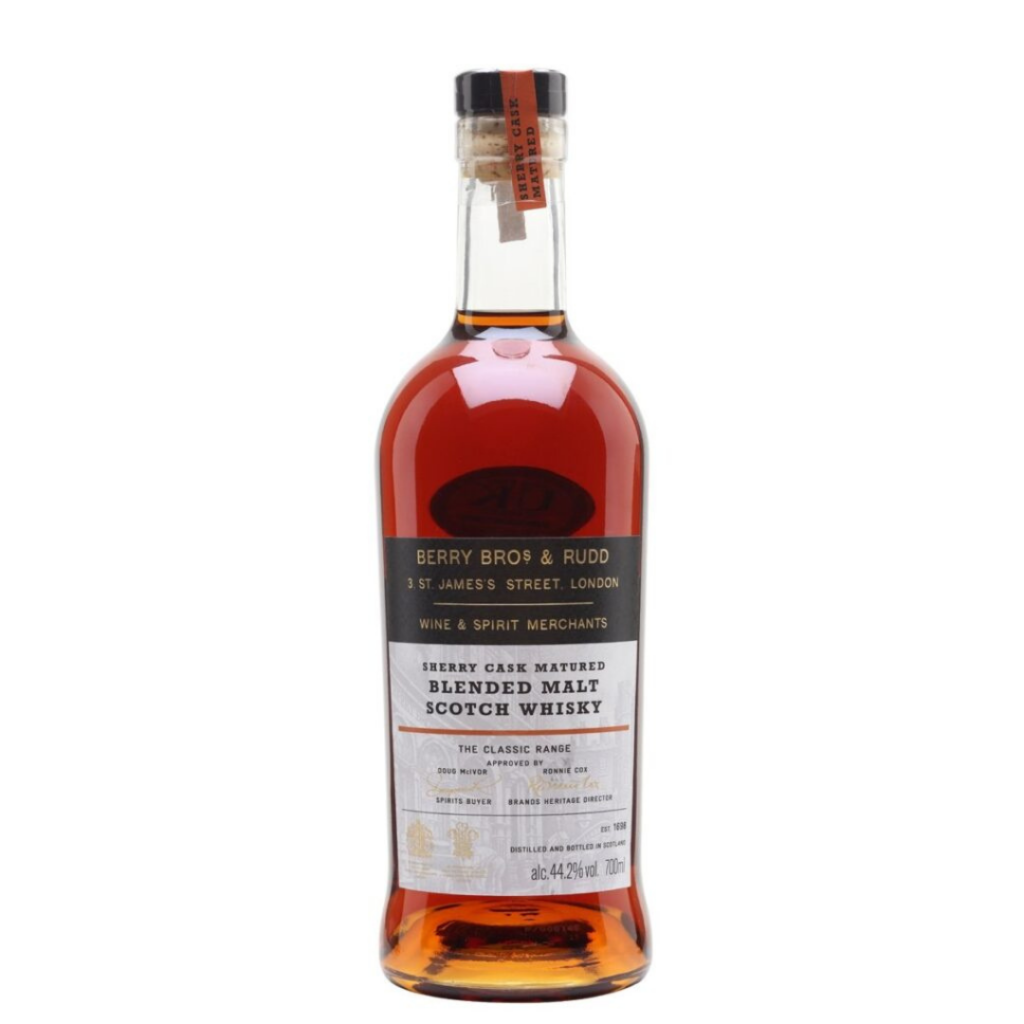 Berry Bros & Rudd’s workshop, no more than 50 metres from the former royal headquarters of St. James’s Palace in London, is in itself a piece of history, an institution since 1698 in a magnificent neighbourhood between centuries-old tailors and the Dukes Hotel where Fleming invented his James Bond. Wine merchants and official suppliers to the Crown, Berry Bros & Rudd know what they do, be it a blend (they invented the Cutty Sark), an independent bottling or… a blended malt! In particular, here comes “The Classic Range”: 4 blended malts with a common aromatic profile or a particular origin made a resounding success. In addition to Islay, Peated and Speyside, there is also this Sherry cask, which is what we poured today (the second batch, at the end of 2018). We are curious, the price is around 40 euros and we like it, how will the quality be?

N: with the sherry here have not been stingy. Immediately very vinous, a dry and aromatic Oloroso. There is a little bit of alcohol, but it tends to tame itself. The fruit is consistent with the profile: currant, sultanas, orange. There is also a delicious note of foliage and damp tobacco, never ungainly. Enchantingly materic, it seems to be in the art education workshop where terracotta was worked.

P: intense and direct, with orange in the foreground this time. It has two dimensions well fused together: a more fruity one, with a pleasant acidity (peach or red grape skins, dried figs not too sweet); another more autumnal one, between the chocolate cake (the good old Fiesta), the chestnut and the coffee praline with the bean. But don’t think of it as a dark abyss of “brown” sensations. The coffee, however, gives the idea of an almost smoky roasting that emerges in the aftertaste…

F: …and which continues in the finale, where it joins bitter orange, rhubarb and balsamic liquorice. Not very long, but that bitter quid leaves the palate very clean.

This type of bottling is a hymn to Scotch consumption (always responsible, ça va sans sans dire…). Often blended malts – if done well – manage to maintain great intensity without giving up a balance that invites you to take a second sip. And at impressive prices for a sherry bomb. This whisky doesn’t have any weak points, never a drop in the sweetish or in the excessively loaded/dirty/astringent. And the finish, so surprisingly clean, makes up for that slightly alcoholic touch on the first nose. Serge has fallen madly in love, we are emotionally more controlled, but the spark is still there: 87/100. In Italy, you can find it at Whisky Italy.