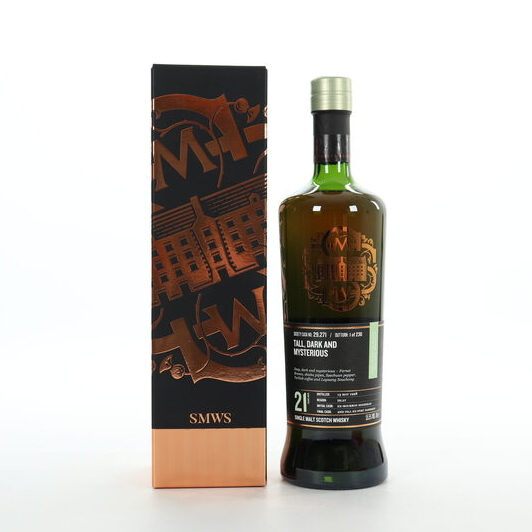 Thanks to a German friend we got our hands on a sample of one of this year’s Scotch Malt Whisky Society’s bottlings: it’s “Tall, dark and mysterious”, a 21-year-old Laphroaig, aged in ex-bourbon and then transferred to an ex-Porto barrel… In the past we have had experiences between the ridiculous and the grotesque with the recipe “Laphroaig + Porto”, so we approach this whisky with some preconceptions.

N: it has a rich and open nose, even at such a sustained abv. The “sweet” part speaks to us of an apple pie burnt in the oven, but also of homemade, sugary jam: Strawberry jam. But also vanilla, butter and sugar. But also barbecue. This is becoming a “but also review… The sea is not lashing, even if it has a nice iodine tip. Burnt pine needles. Gauze and antiseptic, here and there. Peat? Yes, but after 21 years we have lost the excesses of youth: bonfires, but no moon.

P: a pleasant nose is followed by a spectacular palate, thanks to a balance that here becomes total, between the more sugary part (vanilla, jam, quince, blackberries and raspberries) and the more island part. In fact, a typically Laphroaig medicinal flavour returns, together with a completely incinerated wood peat. Almost silky.

Complex whisky, magmatic just when one would imagine it to be splendidly pacified, crystallised into a work of art – and instead the peat still gives you the sparkle, and not even the ex-Porto barrel, though as gentle as we had hoped, is exempt from adding a personal touch. Add the whole heart of Islay and here is a great, great whisky: 91/100. Many thanks to Lars for the sample!