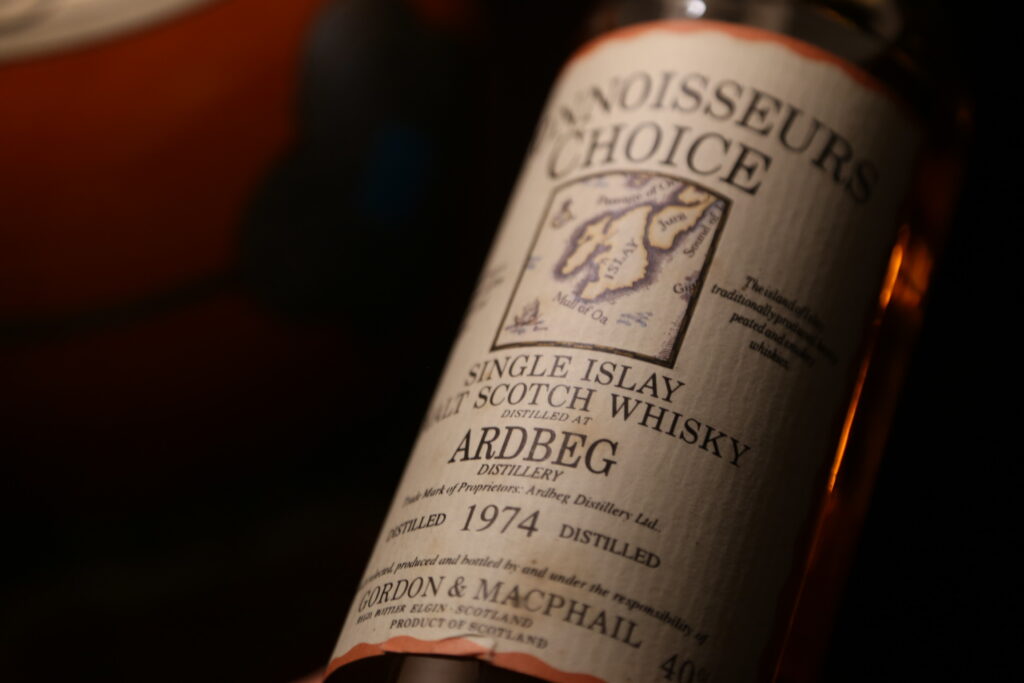 Today we’re going to taste a bottle full of meaning for us, a bottle that speaks of generosity, sharing and a touch of madness. Last summer saw us busy preparing the parterre of the Tasting Facile, our annual tasting of whisky from the past (by the way, we will soon announce the date for this year!), when suddenly the majestic voice of a giant rose up. Mauro Risso, owner of the wine shop-restaurant Parlapà in Turin, wrote us a message, offering to add this 1974 Ardbeg to the already large list of malts to be tasted. All this was pro bono and animated by the sole intent to taste this whisky and – we like to think – to earn our eternal esteem. In the glass we have a blend of barrels made by Gordon & Macphail, a bottler who, in a past dominated by blended whiskies, was among the first to experiment with the commercialization of single malts, through the system of licensed bottlings, whiskies produced in small batches and with a fixed label where the name of the distillery appeared, along with the vintage whisky. This bottle comes from the Connoisseur’s Choice range, though – but we’ll drink it anyway, won’t we?

N: ok, this is complex, difficult, layered. Let’s start with fruit? Come on, yes: medlars, quince, peaches; orangeade, also Orangina. There are many ‘fat’ notes of butter (maybe with a rancid touch); very oily and ‘waxed’, reminiscent of the scent of Barbour. Stagnant sea water. Aniseed also, and also a vaguely metallic sweetness that we do not know well define (maybe there is a hint of carob…). Sweet tobacco (from pipe).

P: uh how nice; maybe it lost a bit as a ‘muscular’ impact, but it certainly remains complex, silky and incredibly elegant. The peat is very sweet, the body remains quite oily, and the feeling is almost syrupy. Honey, perhaps eucalyptus. Still a lot of orange, then a lot of apple (peel of). Milk chocolate. Very smooth peat, refined, almost imperceptible. Sweet smoked fish: it’s an image that gives a good idea of the variety of this palate…

F: here the oyster lingers indefinitely (even kippers), but still sweet (it has no saltiness, even if it is fishy); here it becomes a bit herbaceous, and then dark chocolate and sweet tobacco again. Still a sense of post-oily.

It doesn’t happen very often to intercept an open bottle of an Ardbeg from this period, thanks also to the crazy prices that they have now reached. And it’s a pity because this smooth, paradoxically delicate style has gradually faded over the years, until you get to the modern ultra-peated, almost ‘burned’ whisky of recent years – for goodness sake the core range of Ardbeg is still a prism faceted and to be handled with joy, but it is a distant relative of the whisky we’ve tasted today. And here comes a (hopefully not) last, heartfelt thanks to that whimsical Mauro. If you see him wandering around some whisky festival bringing his proud mane with him, pull it with force, he will not protest, as a piece of bread he is. Meanwhile the score is 89/100.