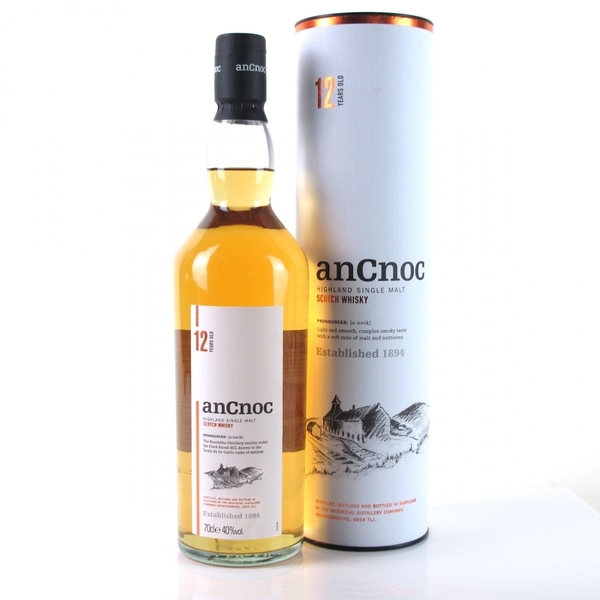 We’re almost at mid-August, so we’re making compromises and looking for easier, more “summer” drinks: so basic Speyside malts, maybe at (ehm…) 40%. Today it’s up to Davide’s favourite distillery, Knockdhu. Located on the eastern border of Speyside, Knockdhu is famous for being one of the few distilleries to have chosen a different name for its single malt from that of the distillery itself: we give a coveted chocolate flavored with curaro to those who in the comments will list all the distilleries that do the same. Be that as it may, Knockdhu means “black hill”, while AnCnoc only means “the hill”: it seems they made it to avoid homonymy with Knockdhu, which means “the hill of commerce”. In short, if we want to take something home with us from this story, well, it’s that Knock means hill – you can spend this anecdote the next time you knock on a door in an English-speaking country, don’t say that Whiskyfacile doesn’t help you break the ice with strangers. Let’s taste the official 12 years, come on.

N: very welcoming, notes of white chocolate (Ciocorì), yellow fruit (golden apple, ripe plum). Green almond stands out, it is very aromatic (sandalwood) but not particularly bourbon oriented. There is Pandoro, icing sugar. Not complex but very pleasant. It can be both rich and “emptied”, as if the wood had poured only half of its components. A strange opulence, rich but not boorish. In time green apple and fresh lemon.

P: not sweet at all, which is a plus. But it is still very much squashed on this sense of green wood and almond, to which you have to add a spicy touch. Actually a bit flat, and that’s still its greatest limitation. The positive aspect is that it remains clean (lemon leaves, yellow apple peel, a slight minerality). A zic of honey, a zic of vanilla and at the end a bitter aftertaste like mint.

The first nose, so expressive and aromatic, is a bit deceiving. Excellent pilot episode, but then the series betrays expectations. It’s a whisky without particular faults if not a general weakness of scents (even for the too low degree, which – let’s remind all our distiller friends – nowadays is a crime), but it’s also a whisky without particular qualities, if not a discreet cleanliness. All in all, it remains a little too flattened on a woodiness an anonymous thread. Entry level honest, not exciting, but that we’ll still drink very willingly, here, by the pool – and it’s the pool of our imagination. 82/100.