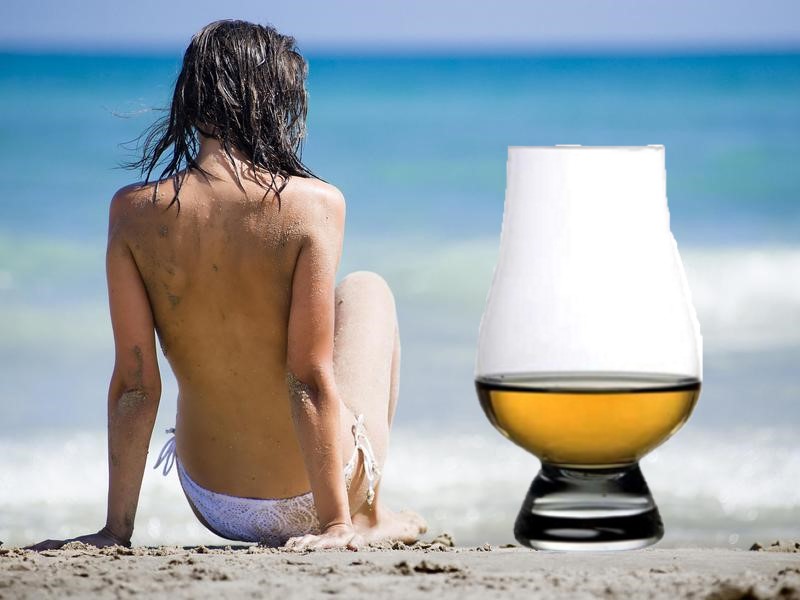 This is the time of year when click-baiting articles such as: “10 tips for losing weight by eating like a greedy pig”, “10 enhancing stretch marks bikinis ” or “10 whiskies to drink in the summer” are published on websites.
For God’s sake, to each his own. But at the risk of sounding snobbish, here instead we try a new frontier of dram-atic storytelling: we’ll enjoy sketching the physiognomy of some whisky like a human entomologist analyzing the crowd at the beach. Not real reviews, but glances and impressions, an aroma like an eyebrow, an aftertaste like a smile. If malts often seem to us gifted with personality, sex-appeal, unforgivable flaws and a totally unique style, then why not?
On the other hand, would you seriously prefer to be told by know-it-all that with 35°C in the shade it is advisable to sip whisky on the rocks or to have a fresh Mizuari rather than a Ledaig 18 that tastes like chestnuts on the fire and smoked boar stew? And then: if you feel like taking an A’bunadh on the shore in a flask instead of peach tea, it should be your own flasking busines, shouldn’t it?

The beach volley tournament, the sack race, the tug-of-war, the spin the bottle game, the Menehito dance… Enough of this shit! Poor guy, he does his job and he’d probably be better off quietly listening to The Alan Parsons Project and reading Joseph Roth in the shade, but he has to cheer up the crowds. The animator is asked to animate, like a “Sweet peat” whisky must be sweet and peaty. Said and done, we start with the race of vague fruits: the team of Apricot jam against the team of Peach tarts. But surprisingly, the Pineapple juice team wins. Wasn’t there? Well, probably it came from the next village. Then the karaoke of sugariness: a caramel solo, a marzipan choir, a molasses warble. Finally, a limbo race on peat, but the level is not high.
At the palate buffet you can taste sweets, dancing the “Gioca Jouer”: sleep, healthy, peach tea, caramel, Superman, hitchhiking, cloves, peach jam, swimming, spray, watery, mandarin, vanilla, horn, peat…
Then, everyone remembers its all-inclusive bracelet. They leave the entertainer and his alcoholic almond end, and they go to the bar for a Mai-Tai shower. And our hero, who spent a day pleasing the bystanders with spirit of service, can retire without shame and without praise. 78/100.

The scale reads 41 kg dressed, but you already know that her weight will burden much more to your gonads. Maybe it’s for the very young age, maybe because she didn’t want to come to the seaside with his mother and his little brother. The fact is that her mission is to make herself unbearable. Her mother advises her to take a bath and she sulks with white chocolate and Haribo gummy bananas. Then the mother asks her if she wants to play cards and she answers with a sickly grimace of syrupy pineapple, barley and marshmallows. If sweetness was a deadly sin, this little girl would go straight to hell.
Then she hangs up on her cell phone with her friends and with an unpleasant voice enumerates the reasons why her afternoon is as painful as the palate of this whisky: sugary, poor, all about banana and grapefruit. She also slips in some unpleasant alcoholic stockpiles and a vulgar bit of sawdust. Then her mother finally gets pissed off and brings her back to the hotel, forbidding her to get out, in a lightning-fast and miserable finale of alcohol, ginger and vanilla.
“I spit on today’s young people”, someone used to sing when he wasn’t a guru yet. But if today’s teenagers are like that, banal, weak and rude, there’s little to be optimistic about. 76/100.

It’s an old man both in name and in nose, with that sense of stale, brackish and dusty following him everywhere. He doesn’t bring fruit to the beach, on the contrary he comes with a rancid ham sandwich and the greasy tank top he was wearing when he repaired the Ape Piaggio (he still smells like gears…): I should move my towel over there…
He sits a bit shy, you know, blended don’t shine out of awareness. And from his saddlebag he extracts a palate of mineral peat, well exhibited as the Puzzle magazine he compulsively fills out. He has a skinny body, he exudes salt again and he puffs graphite every time a balloon rolls by, showing off a sweetish smile. Undecided whether to opt for a bath, reminding him of his youth in Port Ellen, or for completing the concentric frames, he remains little and he leaves almost immediately. And while he’s disappearing, you wonder wether he was a pleasant guy in his youth. Because right now you wouldn’t say that.. 79/100.