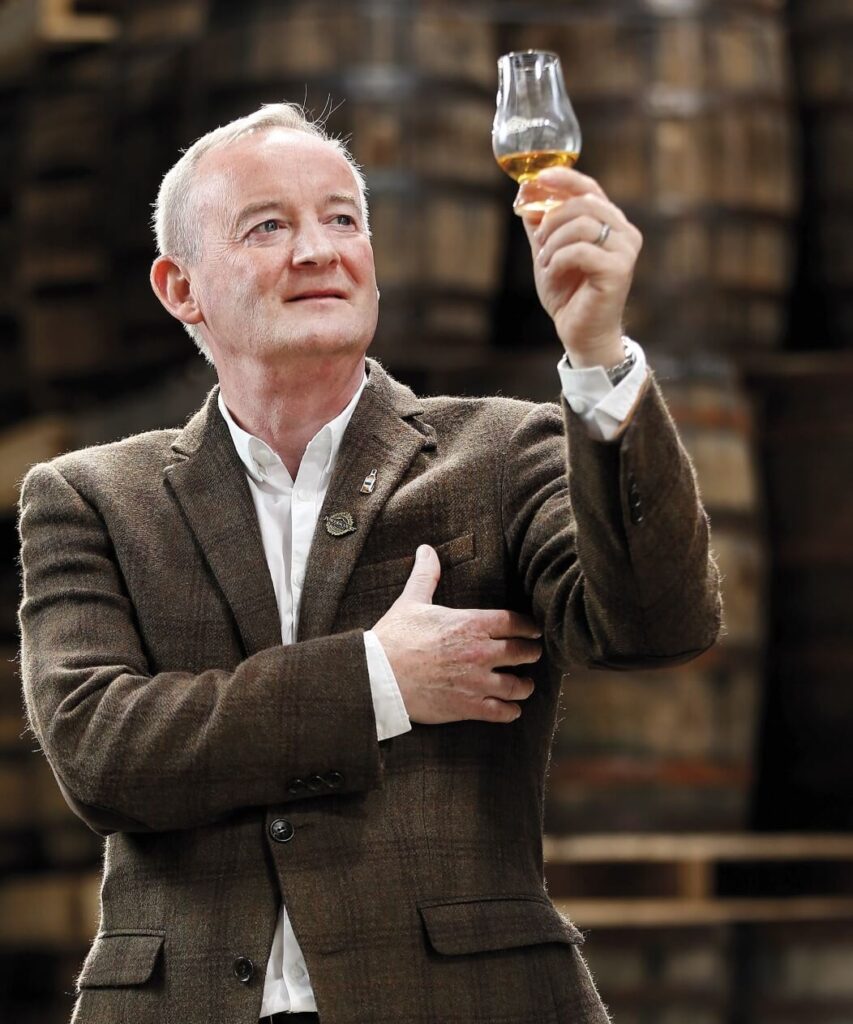 We were lucky enough to have a chat with Noel Sweeney, an Irish whiskey legend: he is now Master Distiller at the young Powerscourt Distillery in Ireland, but he has been “Distiller of the Year” several times, and in 2017 he joined the Whiskey Hall of Fame. Founding member of the Irish Whiskey Association and member of the technical committee of the Irish Whiskey Association. You see, he’s a big man… We took the opportunity to chat about his history and the fate of Irish whiskey, which is currently in a phase of great expansion.

Hello Noel, thanks for taking some time answering our questions. First of all, you’ve had a pretty long and important career in the Irish Whiskey World: first of all, how did you get to work in the whiskey industry?

I’m a farmers son who qualified as a Labroatory technician, became a distillery shift supervisor and quality manager before joining a whiskey startup project in 1989, learning the skills of whiskey production and bottling, blending and distiller manager through to 2016. Along the way picked up a Science degree in Information technology and a Masters in total Quality Management.

Ireland is the home of whiskey! Irish Whiskey has been distilled in Ireland since the 6th century and is one of the oldest spirit drinks in Europe. It has deep roots in Ireland. Industry investment and consequent production grew rapidly in the late 18th century. At its height in the mid-19th century 88 licenced distilleries, producing more than 12m 9-litre cases annually, made Irish Whiskey the largest global spirits category of the time. However a combination of events led to the industry’s demise and by the mid-1980s only two Irish whiskey distilleries remained, both owned by Irish Distillers. Scotch, Bourbon, and Canadian whiskey had all surged and left Irish volumes far behind at about 1% of global sales.

A nightmare scenario. And what was the turning point?

Things have massively changed now. Which are the main goals that Irish Whisky, as a category, should try and achieve?

I believe we must continue to grow the category by continued leverage of the current brands, extending the number of brands, expoliting new markets for Irish whiskey, premiumisation to expolite the demand for more high value offerings through exclusive releases, special finishes and rare older stock. The category is still dominated by one brand with a few smaller brands of blended Irish whiskey. We need to increase the share for Single Malt, Single Pot Still, Single Grain, peated expressions of these too.

And which are the biggest mistakes not to be done, in your opinion?

Screw up the quality or the reputation of the category, with the proliferation of new distilleries…

As a Distillery Manager for Powerscourt, which are the biggest challenges you’re facing?

Initially getting good experienced people, once trained keeping them.

People still falls under the stereotype that Irish Whiskey is and can only be “triple distilled, mix of unmalted and malted barley” – while the reality shows that there are many styles, and many approaches. Which is the most in depth identity of Irish Whiskey?

Irish Whiskey has been around centuries and as you have rightly said the notion that it was always triple distilled and not peated is relitively new, less than a 100 years ago a peat tasting Irish whiskey was common, it was the introduction of coal in the port cities that removed the need for peat to dry the malt. Irish and UK history is full of references to peat double distillation large stills for tax avoidence reasons mostly different mash bills including oats, rye etc. The triple distillation and non peated strategy was a marketing strategy to differinciate Irish from other Whiskies in the market place dominated by Scoth in the second half of the 20th Century.

Take peat, which is very popular in some markets, as Italy: do you think that peated whiskies could be something to follow, after the Connemara experience?

Of course and I will release a peated pot still in a few years. I always mantain that the customer will decide what style flavour etc wins out.

Sourced whiskey: we know it’s something out of necessity, but do you think that it’s a phenomenon that’s going to stop shortly, or we’ll go on seeing sourced whisky and new original whiskeys side by side under the same brand?

This practice is extremely common in Scotland and has really taken off in Ireland, it will become less relevant as the new distilleries introduce their own production in the next number of years.

You decided to join Powerscourt Distillery, and you’re now deeply involved in the project. What can you tell us about it?

The distillery is set in the most splendit surroundings in the county known as the garden of Ireland.We have an annual capacity of 3.5 million bottles of whiskey. The distillery can produce Malt, Peated Malt and a variety of potstill spirits with on site warehouse and a visitor centre. Which style are you trying to give to this whiskey, will it follow Cooley’s path or it will show something different, something new? The Malt will be similar to Cooley but will not be the same. The potstill will be new and hopefully intesting.

Up to now, the core range has the Premium Blend and three whiskies with Age Statement (10, 14, 18); can you give us some hints on future releases, or plans?

We are fortunate to own stock which I produced dating back to 2000. It is our intention to release premium and super premium products, Fercullen will be a brand of a high quality Irish whiskey with an age statement. We will release an 8 yo blend next year to replace the current blend, and a few new releases are scheduled prior the Covid 19 issue