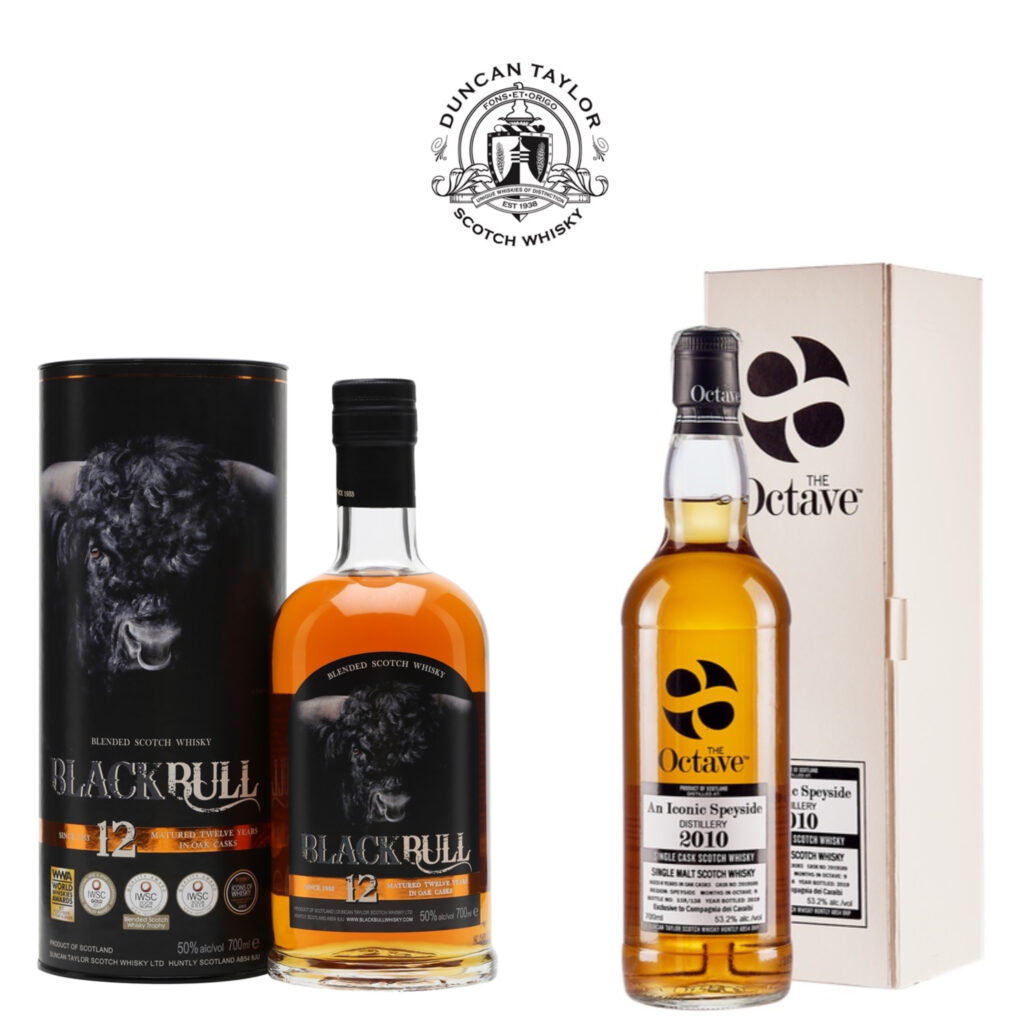 Let’s drop our masks again for another stage of the “Online Whisky Show” that we organized together with Andrea and Giuseppe from Milano Whisky Festival. Now about ten days ago, we enjoyed one of the funniest evenings of the show, entertained on Zoom by the exceptional anecdotes by Fergus Simpson, brand ambassador of Duncan Taylor Ltd. Folks who know him, know that when Fergus begins to speak, with that central-Italian-gaelic accent that makes him adorable, you would spend hours listening to him. And in fact, it went pleasantly long… Duncan Taylor is an historic brand, founded in Glasgow in 1938 by Abe Rosenberg, a New York Jewish businessman. Barrel merchants and brokers, then bottlers, Duncan Taylor’s boys own the equivalent of Fort Knox in barrels: one of the richest collections of barrels in Scotland. They bottle different labels, from the blended Black Bull to The Octave series, from Dimensions to the fine Tantalus and Rarest. And while Fergus is talking, we’re drinking.

Black Bull 12 yo (2019, OB, 50%)
We start the Black Bull, the house blended, whose recipe was developed by a blender from Dundee – George Willsher – in the 1860s. On the label there was a black bull, winner of the competition for the best Aberdeen Angus in the area. Due to illiteracy, the whisky became known as “Black Bull”. Fergus explains that at least 50% of the mash is malted barley, that there is 0,6% peated whisky and that in this blend there’s also some 16/17 year old whisky. All this undergoes a six-months finishing in sherry casks.
Very aromatic and fruity, between peaches and sweet orange (perhaps peach tea). There is a touch of wood, like hazelnuts and toasted chocolate. There’s a hint of soap and talc and a touch of alcohol, and then hazelnuts. In the mouth is definitely not a calf… Strong, full-bodied, the alcohol content gives it a nice mouthfeel. Dark chocolate, wood and tannins avoid any derailment in the hyperuranium of the sickly sweetness. On the contrary, there’s a hint of sage and bitter herbs. Rustic but not abrasive. It smoothes further with water. The finish is long, not sweet honey and lemon. An idea of light peat and a curious sense of saltiness. With water comes out a sparkling ginger-like freshness.
Nice specimen, this beef. Not at all condescending, male and muscular. Blended for single malt drinkers, they say live. Someone vagues it can be a good base for Old Fashioned, we just appreciate it with a bellow: 84/100.

An Iconic Speyside distillery 2010 “The Octave” (2010/2019, Duncan Taylor, 53,2%)
We cross the threshold of single malt and we do it with two “puffin secrets”, as we say in Italy: two “iconic” Speysider, and “iconic” after “viral” is the most unbearable adjective of the Oxford Dictionary. The anonymous distillery, in this case, begins with Glen and ends with -farclas. The first one – which undergoes a second maturation of nine months in ex Oloroso Octaves – is an 8 yo, is part of the Octave series and 138 bottles came out from the cask 2919609.
It starts on fresh and kind of ‘acid’ fruit, among currants, strawberries and especially a lot of mandarin. Over time it becomes more “yellow”, on ripe banana, pineapple and candied lemon. The sherry comes out, and it is immediately milk chocolate, toffee and cinnamon, with a touch of sponge cake. And the roundness becomes eternal. With water you can feel the youth: yeasts and gooseberries. In the mouth it’s full and snappy, even if it “scratches” a bit at the beginning. Tobacco, pink pepper, bitter chocolate. Also plums and licorice. Nervous whisky, which even with two drops of water remains aggressive. With time, however, it becomes more pleasant and creamy (apricot and apple mousse, and goodbye sherried sensations). Finale of spicy tobacco, licorice and almond. Water and flour.
If the idea of the series is to allow superactive casks to accelerate the maturation of young spirits, it must be said that the mission is accomplished. A very enjojable whisky with strong colors, intense, that shines even more with the brushstrokes of sherry. Pret-a-boire, for the haute couture look elsewhere. 85/100.