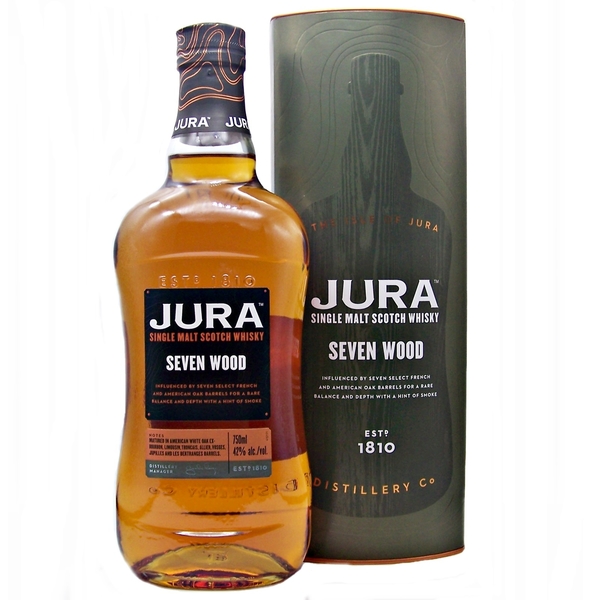 Jura, poor Jura: a distillery that’s a stone’s throw from Islay (it’s on the island opposite Islay, in case you guys hadn’t noticed) with a reputation completely annihilated by that of its neighbours. Of course, in the past quality has been a bit of a dancer, but recently they seem to have steered the rudder in the right direction; although it has to be said, the name and concept of this bottling plant are not the most inviting. Seven Wood, or seven woods: ex-bourbon barrels, and then six French woods (Allier, Les Bertranges, Limousin, Jupilles, Troncais and Vosges wines). It’s ok that ‘cask is king’, but here maybe we exaggerate…

N: very strange. With a name like that, you’d expect a wood stripper, but instead… It manages to be curiously split between a very naked distillate (and not so convincing, to tell the truth, there’s an alcoholic aromatic hint reminiscent of some Eastern European fruit spirits) and a watered-down, very chip-like wood. Apricot, pear candy; Ambrosoli honey. On the side, some herbaceous (rosemary?) and mineral notes.

P: confirms the weirdness of the nose. You can still taste the taste of alcohol, even though it has no alcoholic impact (which seems a problem, seen from here), and it remains on the whole very loose. Raisins and cocoa powder. More wood shavings; still divided between this sense of shiny wood, a little bit everywhere, and a distillate – like – of Balkan plums.

F: a sigh, maybe a little peaty and a little toasty.

Unfortunately, this Seven Wood is really disappointing, and it seems above all a defect of thought: the contribution of the woods, usually very active and very strong, here is unrecognizable and very diluted, lacking in intensity and quality of flavors. Too bad, we were hoping for a different pleasantness: 71/100.