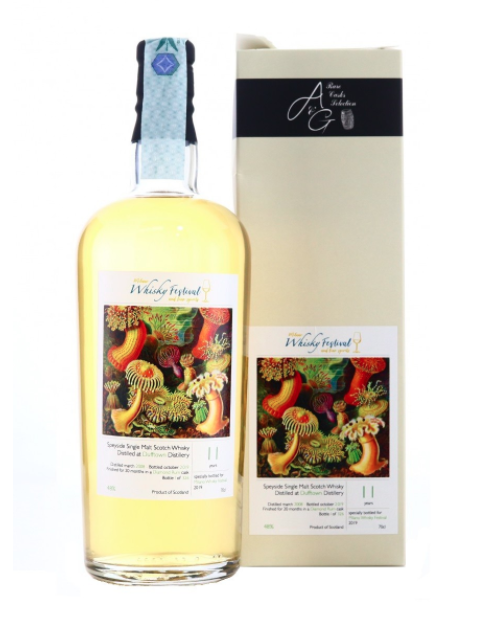 After having a Dufftown single cask by Valinch & Mallet, finished for two years in Faraon Oloroso, we want to taste another Dufftown, more or less the same age, bottled by Milano Whisky Festival (A&G = Andrea Giannone & Giuseppe Gervasio Dolci) after a final maturation (about two years) in ex Diamond Rum cask. This rum was already bottled by the MWF guys, but they saved the cask for further experiments. The idea was to give “a little evil” to this young speysider. We like to taste it today to see how, with the same starting distillate, a second aging can affect the character…

N: very open and very pleasant; it has a ‘green’ nose, it smells of fresh grass in summer, if you allow the suggestion; it has strong floral notes and a pleasant citrus side: perhaps lime, definitely Tassoni Citron. Unripe pear. Does it smells like a Dufftown finished in rum, if you have it blind? No, you wouldn’t think it does, at all.

Inconsistent, in its own way, confirming that “funky twist” that you can see in the label too: it’s two different whisky in one, with a fresh and delicate nose, almost not influenced by the wood, and an explosive and almost psychedelic palate. Two different whisky, but both very pleasant, both 85/100 for our standard. It has nothing to do with that Dufftown in Oloroso: should we blame the distillery for crafting a soft distillate? And why would we?