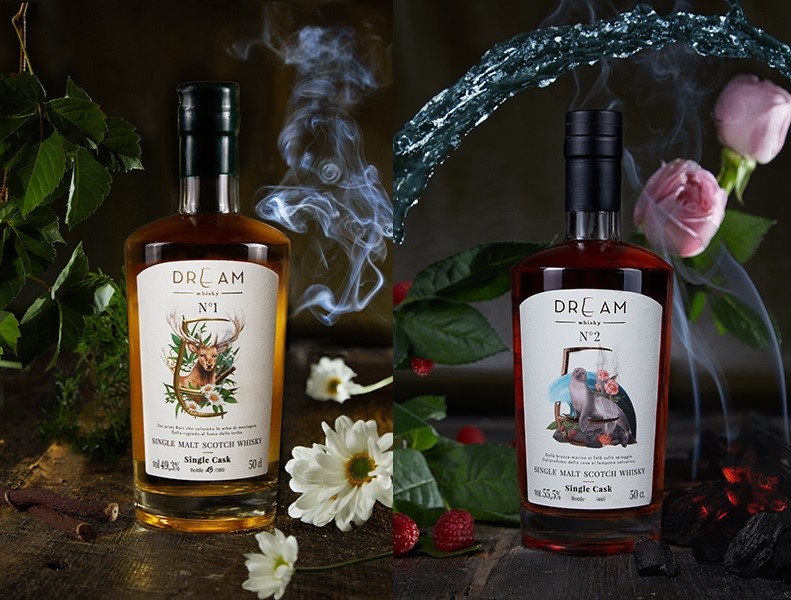 New Italian independent bottlers are becoming like sushi bars in Milan: the minute you turn your back, a new one suddenly appears. Among the new brands, we’ve still written about Dream Whisky, the nice project by Marco Maltagliati and Federico Mazzieri. Who – after a year spent helding tastings – realized their dream, launching their own bottlings series. They started with two “firecrackers” (technical term), two single casks with a cryptic and evocative label: Dream #1 and Dream #2, like Parent 1 and Parent 2.

New Italian independent bottlers are becoming like sushi bars in Milan: the minute you turn your back, a new one suddenly appears. Among the new brands, we’ve still written about Dream Whisky, the nice project by Marco Maltagliati and Federico Mazzieri. Who – after a year spent helding tastings – realized their dream, launching their own bottlings series. They started with two “firecrackers” (technical term), two single casks with a cryptic and evocative label: Dream #1 and Dream #2, like Parent 1 and Parent 2.

We love puzzles, so we can’t wait to solve them. Dream #1 shows a deer’s head on the label, reminding of the rural nature of the aromas. And no, the bottle doesn’t contain a compound spirit with alfalfa and fawn fillet. It contains an Ardmore whisky, matured for 10 years in an ex Bourbon casks previously used for Laproaig maturation. The abv is 49,3%.

N: open and multifaceted. The first nose is definitely floral, let’s say poutpourri and dried chamomile, but perhaps we’re mesmerized by the label… Turmeric and something reminding of a light curry. Then slightly minty notes. There’s an abstract sense of white fruits (litchees, or maybe white grape). Suddenly, a suggestion: banana and pine needles! The peatiness is pretty dirty and focused on smog, even if it’s quite delicate. A mix of chemical and minty aromas, like Afrin congestion spray. Green and wet grains.

P: the alcohol here is a bit like a runaway horse, you distinctively taste it. On the palate it seems less harmonious and more simple compared to the nose. The first note is the barley on the malting floor, and it’s delicious. There’s a sensation of burnt wood and ash. It’s definetely more aggressive than expected and it strives towards an excessive dryness. Some drops of water are recommended: the alcohol steps aside and it remains a beautiful taste of smoked cereal, with a light hint of pear. White sugar.

F: have we already mentioned the smoked barley? Black pepper, too.

The nose rates 85, the palate 79. We average and we say 83/100. It’s surprising, because we expected a product (pardon, an emotion!) more easy and people-pleasey. And yet, it’s a whisky for geeks, rather difficult and focused on raw material. It’s not an obvious choice at all, and we like it.

The second dreamful born has been renamed “Navy seal”: Dream #2 shows a label with a wave, a seal, some raspberries, two roses and a wisp of smoke. Didn’t you understand? It’s clearly Caol Ila! Less easy is to guess this whisky’s finishing: the color it’s a nice pink, suggesting Port or red wine casks. Actually, it’s Madeira: 12 months after six years spent in an ex-Bourbon cask. The abv is not for children: 55.5%. It’s time to taste it.

N: despite the abv, it’s very open and expressive, it doesn’t need dilution. We’re welcomed by a pretty dirty and fat peat, quite maritime too. Black olives brine, iodine, strawberry naphta. If there were, it would be every engine’s delight. This particular note introduces us to the other viney soul of the cask, focused on undergrowth notes: strawberries/raspberries and a fragrant carpet of Autumnal wet foliage. The fat spirit is still here, with a note of caramelized würstel. There’s a mouth-filling sweetness, overtaking a faint touch of mold. Just do not think about it as a cloying malt, because it’s always nicely fresh. Intriguing and quite unique nose.

P: sweetness first and foremost. A coin with two sides: a vague sugar-ness (red berries gelée) and a meatiness (wurstel again, with honey and mustard). Despite these hallucinogenic descriptors, we swear we didn’t take any LSD during this tasting. The seaworthiness changes, it’s still salty but it gains that particular Caol Ila note of ink. An intense and acrid peatiness of burnt wood.

F: combustion carries on: tar and embers. The ink prolongs everything but it doesn’t overwhelm the notes of red berries from the wine cask. A fresh final sensation of aniseed and mint.

This whisky made us think. First of all, we notice independent bottlings from Islay are increasingly younger, and this is not bad at all. Secondly, to put a Caol Ila in a cask with such a strong personality is a coin flip. But fortune favors the brave, and Dream guys are bravehearts. It’s a curious whisky, a Caol Ila with a strange harsh peat where the islander soul plays with the bizarre influence of the cask. This seal has sex appeal: 87/100.

Recommended soundtrack: The Coral – Dreamin’ of you