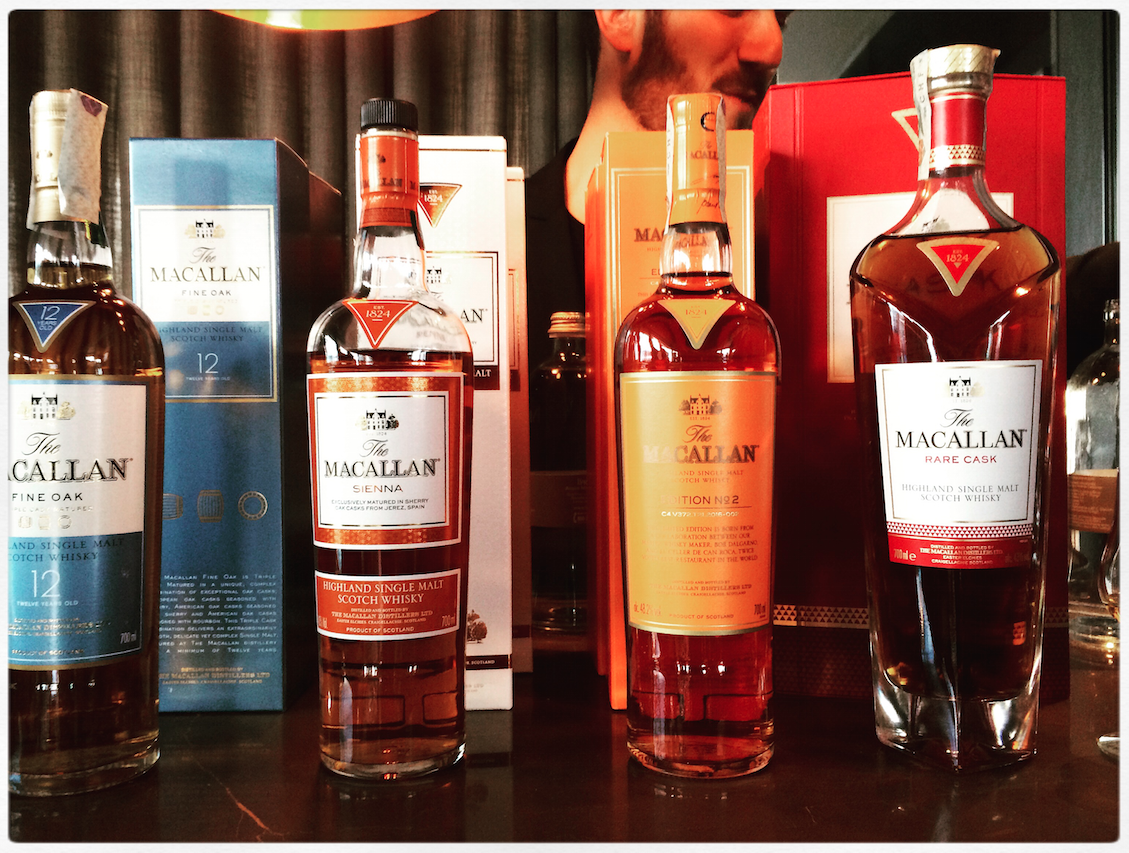 Thanks to the usual but not granted courtesy of Velier (Chiara Barbieri and Germano Pedota), we were invited to the presentation of some Macallan references at the beautiful setting of Ceresio7 Pools & Restaurant in Milan. Now, you perfectly realize that among the many sins a man can indulge in, refusing a tasting on a Monday afternoon is perhaps one of the most regrettable: that’s why one of us sacrificed himself on the altar of the sense of duty.

The place, which we had already seen thanks to Velier and the Edrington group (the most attentive will remember a Highland Park tasting held last year), confirms its beauty. But compared to that first event, this time the delicious elegance of Nicola Riske, Macallan’s Brand Ambassador for Southern Europe, stands out (without detracting from the brawny Mikael Markvardsen from HP…). We are particularly fond of Nicola because, at our first Spirit of Scotland tasting 4 years ago, she bought a whiskyfacile t-shirt: even if she no longer keeps it, she still will be our favorite brand ambassador forever.
Talking about The Macallan, well, it goes without saying that it is one of the iconic brands par excellence: for decades the brand has been synonym of the very concept of Scotch. Macallan has crossed the luxury market before the Scotch industry came up with the same idea. We also know that it recently had to defend itself against not a few (very justified) criticism from hard and pure whisky lovers, after having abandoned for many bottling both the indication of age and the exclusive maturation in ex-sherry casks, two of the cornerstones of Macallan throughout the second half of the 20th Century (although some new releases for other markets suggest a possible change in strategy). But whisky community also accuse the brand of explicitly preferring the pure luxury market with little regard to the enthusiasts who had contributed so much to make Macallan, well, The Macallan.

The tasting path started from the 12 yo Fine Oak, reintroduced on the Italian market this year – as we already mentioned here, the Fine Oak series itself was responsible for that widespread disaffection towards Macallan. This 12 years old is the result of a blend of three types of cask: American ex-Bourbon oak, American ex-Sherry oak, Spanish ex-Sherry oak. Bear in mind that the point which Nicola stressed the most is precisely the investment in wood, since “70/80% of the character of whisky is given by the cask”. Defined a “springtime dram”, the 12-year-old Fine Oak seems to be an excellent introduction to whisky, consistent with the style of many middle-aged Speysiders: it has, especially on the nose, hints of candied fruit, ginger, perhaps even a hint of yeast; certainly, rounder notes of honey and almonds facilitate the smoothness of the palate, with a finish that seems a bit ‘drier’, with a hint of dried fruit (apricots?). Overall it is a good whisky, deserving (indicatively) of an 84/100.

The second whisky poured into the lucky stomach of our correspondent Jacopo was Macallan Sienna, which we had already drunk and reviewed here: we confirm the good impressions and we report Nicola’s elegant answer to those who asked the reasons for the abandonment of the age statement: “As in an apple tree, the maturation of the barrels is not homogeneous, and not indicating the age allows us to choose only the best apples – uh, barrels – without caring about the constraints of age”. Here too, all communication was aimed at stressing the importance of wood, purchased directly from forests in Ohio and Spain and kept to mature mainly with sherry. Nicola has always used the term “sherry seasoned”, i.e. barrels which have contained sherry for a couple of years, a detail perhaps worth considering.

The third dram generously served is the long-awaited Edition n.2, a limited edition resulting from the collaboration of Bob Dalgarno, “Whisky Maker” in Macallan (how many evocative ways to define a profession: and the more you climb the scale of luxury, the more they become simple), and Roca brothers, owners of the famous Galician restaurant El Celler de Can Roca, multi-starred and ‘Best restaurant in the world’ in 2013 and 2015. This is a mix of American and European oak casks, which contained sherry of various bodegas. It doesn’t use only first-fill barrels and it’s bottled at 48.2%. The nose is very rich and inviting, with notes of caramel, chocolate truffles, honey, dried fruit, chocolate, stewed apples and lots of citrus fruit; on the palate, very consistent, the orange takes the stage (we would say: caramelized orange) along with some spicy tips, especially nutmeg, which lasts until the end. A very convincing whisky, also thanks to some ‘young’ notes here and there that peep out (candied fruit, candied ginger again) and that make everything more lively and light. We’d still be around 88/100.

We took home the fourth whisky and we’re going to drink it in peace tonight: so, please wait until tomorrow for our impressions of the celebrated and very expensive Macallan “Rare Cask”,… For now, we must recognize that Macallan is not able to produce low quality whisky. Of course, compared to the Macallans from the past, 18-year-olds aged in barrels that had contained sherry for many years, we are on another planet, but we already knew this. It would make no sense to look for the charm of the Beetle in a New Beetle, and on the other hand we also got a little bored to regret the old times gone by that, incidentally, we have not lived. Armed with pragmatism and generational ambitions, we enjoy what passes in our glass: it is now a fact, which tends to be irreversible apart from a few proud pockets of resistance, the whisky industry is moving in the direction of whisky concepts, built thanks to very active woods. Macallan is being burdened and honored to have been the first to make a Copernican revolution on what it itself had created, and here, given that the burdens have already been mentioned many times (and, a bit coincidentally, the Supreme Serge comes back to us, and using severe words, just today) and it would seem inelegant not to appreciate hospitality, we like above all to indulge in praise. So, after all, well done, Macallan: there is construction and construction, and your whisky – trivially – are good and well constructed. Need anything else?

Thanks again to Velier and Nicola Riske for the excellent opportunity to attend this beautiful presentation and, above all, for giving us an excuse to get drunk on Monday afternoon.