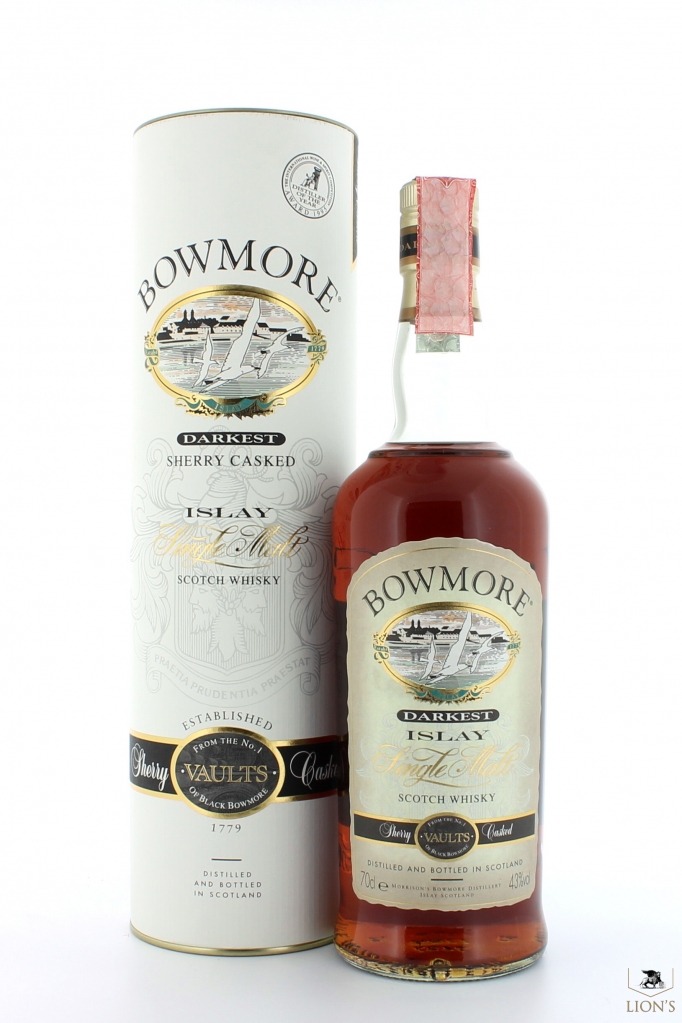 Now that Brexit is a fact, the aficionados of the Scottish malt juice are thinking about the destiny of the beloved distillate: we keep marching straight dram after dram. Only the future can say if our indifference will be rewarded or it’s a Titanic-like failure. Hypothesis of crippling import/export difficulties, fear for a nonstop up and down of the prices, and theories of a stop of the huge distilleries investments are only some of the speculations that are being shouted around. In the meanwhile Scotland seems interested in launching a new, incredible referendum to leave the UK and join back Europe. We’re more afraid that this Bowmore Darkest, one of the first expressions of this very long-lived distillery bottling, aged completely in ex-sherry casks, may not be as good as expected. Omen of doom.

N:  Bowmore is, amongst the Islay peated malts, not the smokiest. This one is even a notch below, with vague hints of ash and extinguished fireplace. Also the marine notes are not exactly evident: what we find immediately is a soapy influence, floral (lavender, anyone?) which delivers an oxygen-less feeling, a bit like the grandma’s drawers, with a soap bar ready to perfume a pile of huge panties. Something mentholated, eucalyptus, similar to shaving cream. An immense sherry appears: chinotto, cherry, blood orange marmalade orange very ripe, perhaps too ripe. Overall very silky, rare but not very exciting.

P: the body is a bit weak and inconsistent. The notes are even worse: soapy feeling (yes! In the taste!) which ruins everything, unfortunately; a whole violet hard candy taste, omnipresent from the beginning until the end. Very sweet, almost disturbing (white sugar: or, as Serge says, grape juice!, that is how sweet this one feels), completely lacking peat and smoke, even less present compared with the nose… a tiny bit of salt at the very end.

F: unfortunately the feeling of eating a piece of soap is not leaving. Again violet candy, eucalyptus, sherry. A whiff of ash.

Unfortunately our fears were fully motivated, revealing an extremely flawed whisky not able to show how great the Bowmore distillate can be when aged in sherry. It missed a sprint in any direction, lacking both the fruity and marine/peated notes we would expect. We can only hope this was a bad batch: 70/100.

Reccomended soundtrack: Tame Impala – The less I know the better