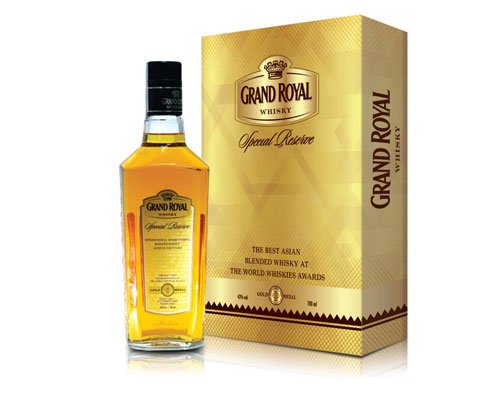 You all know that Myanmar is a country in great growth, even if the political situation remains twisted. Of course, when Aung San Suu Kyi won the first democratic elections in November last year, she will certainly have had a toast with the best-selling national whisky: its name is Grand Royal Special Reserve and it is made with 16 different malts and grains whisky from Scotland, plus grain whisky produced in Myanmar. Today we have the pleasure to taste a very rare, collectable version, dating back to 2014: mind that this little gem has won awards such as best Asian whisky, even if, as said, a good part is just Scotch. Lorenzo, a dear friend of ours, brought us a bottle, since he knows our passions.

N: incredibly dull, inexpressive and alcoholic. We aren’t meaning that it is pungent, but that it smells of denatured alcohol. There is a note of cheap woman perfume, indistinct and frankly unsettling. The cereal shows itself with a marked and abstract sense of vegetable, between lettuce and a freshly cut hedge. A little disturbing, here and there a whiff of industrial cheese after the expiration date is long past. Sweetness is just alcohol.

P: better than the nose, because it does not replicate that awful shyness; spreading a pitiful veil on the quality of the body, at least here we have a sweetness, built on notes of honey, molasses and dried fruit (nuts). It seems to have a glass of water and sugar, with alcohol added: isn’t it fantastic? Still vegetable notes, again perfume.

Well, what can we say? thanks Lorenzo! We’re sorry to quote Serge, but it’s exactly a whisky you can drink only traveling to Burma when you’re desperate because you can’t even find a fake Scotch. Actually maybe you’d buy it but then, once tasted, you wouldn’t drink it: a thing that we imagine has happened to our friend Lorenzo. In short: for a strange circle of topics, the vote will be just the same as Serge: 50/100.