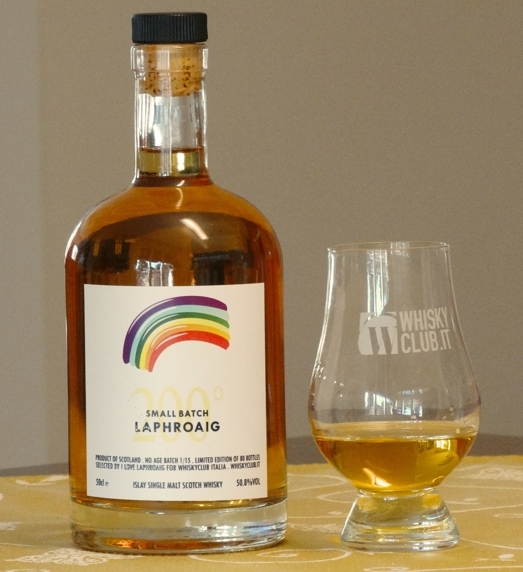 Claudio Riva’s Christmas present has arrived, some would say: and he would be right, because every year, when the cold weather starts biting most people’s buttocks, and the sofa & plaid option becomes primary (possibly in good company, which alone is enough to explain the large number of pregnancies in late summer, but maybe we’re digressing…), here it is: Riva arrives and like an early and beard-free Father Christmas pours a Laphroaig he personally selected. This year the choice appears revolutionary: in fact, it is a NAS, a mix of three barrels. If we are not wrong and we do not report bad rumors, it is two over ten years old – even a lot over – and one under. The name “Arcobaleno” (rainbow) is not a tribute to the LGBT community, but to the beautiful rainbow Claudio and his friends saw at the last Feis Ile.

N: compared to the other one by Valinch & Mallet, this one ‘screams’ in the glass, with a similar but definetely more intense profile; a nervous distillate emerges, with an aggressive, smoky, diesel-engine peat; and with an exuberant, swimming-like, almost fishy marinity (it reminds us of oysters). Here too, there is that veil of talcum powder, which is added to an ‘organic’ but almost ‘sweet’ note, which reminds us of emmenthal cheese. A touch of caramel, of warm and burning wood; sugary lemon.

P: very dense and chewable; compared to the V&M one, it shows less flames of flavour, remaining more linear – and it is precisely this ‘liqueuriness’ that makes it fascinating, because this side has an impact on the most genuine Laphroaig soul. The sweetness is all about meringue, liquid sugar and a sense of toffee and something vaguely similar to Marsala wine. Also salted seawater, with an acrid and ashy smoke. It seems at a certain point to recognise almost something… soapy, perhaps an aftershave memory?

Very different from its sparring partner: definitely more evident is the contribution of the oak, which takes away something in complexity, especially on the palate, where something winey appears (again, maybe we remember wrongly but we seem to have heard that at least one of the barrels has passed a finish: maybe in ex Marsala casks? but it is pure speculation). Anyway, very good, as always, and at a really fair price: 85/100.