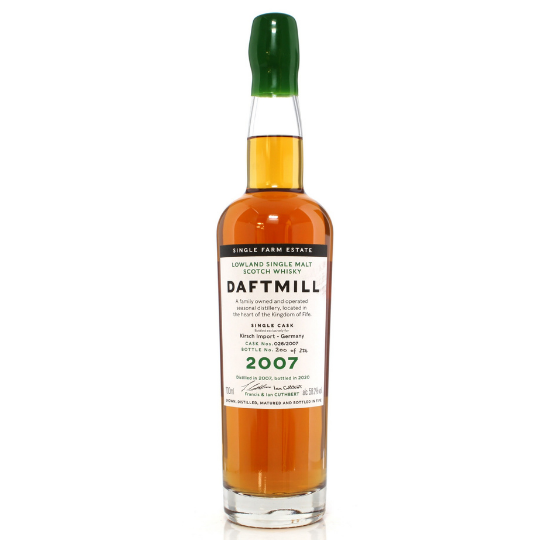 The good thing about having so many friends around the world is that we exchange samples of limited editions for individual markets – when the friend is a member of Whiskyfacile, well, then it’s even easier. Davide, as you know, lives and works in Germany, and working with Tara Spirits, a famous Munich shop, he has access to a lot of goodies. Here we have a single cask of Daftmill, 12 years old in an ex-bourbon barrel from Heaven Hill, bottled exclusively for the German distributor, Kirsch.

N: the alcohol content closes it down a bit, in the sense that it holds, compacts the aromas, don’t think of an expressionless nose, on the contrary, but time helps to restore complexity. Very bourbonous, with notes of pecan nuts, almonds, marzipan, vanilla…. A note of pastry, raw and cooked, dominates. Then there are spicy notes, which we would say are between propolis and pollen. Sweetened cappuccino. The fruity part is a bit hidden (but when it arrives, it’s spectacular!) and iridescent, somewhere between banana, pineapple, dried apricot… We forgot one thing: the packet of sweetened cornflakes we had just opened, and we were immediately a child again. Water sweetens, with notes of paradise cake, vanilla and icing sugar.

P: explosive and virtually non-alcoholic. Here the fruity part is in the foreground from the very first sip, and it is a sweet, ripe fruit, dancing between yellow fruit and tropical: banana again, yellow apple, pineapple, coconut. There is a growing herbaceous, almost balsamic scent, bordering on aniseed (a hint of Ricola candy). A mat of toffee (toffee, Alpenliebe). On the sides, there’s still something…. damp, which makes us shout “geosmina” to the four winds! The water opens up even more towards a herbaceous side, alive and vibrant.

Very good indeed, confirming all the good things we have always thought (or rather tasted) about Daftmill. In addition to the very marked pastry part, given by the bourbon, what strikes you is the lively, lively, snappy herbaceous note – we are dealing with an active, lively cereal, a surfer cereal, not a librarian cereal (and we say this, as we are much more like librarians than surfers). 87/100. Many thanks to Davide for the sample.