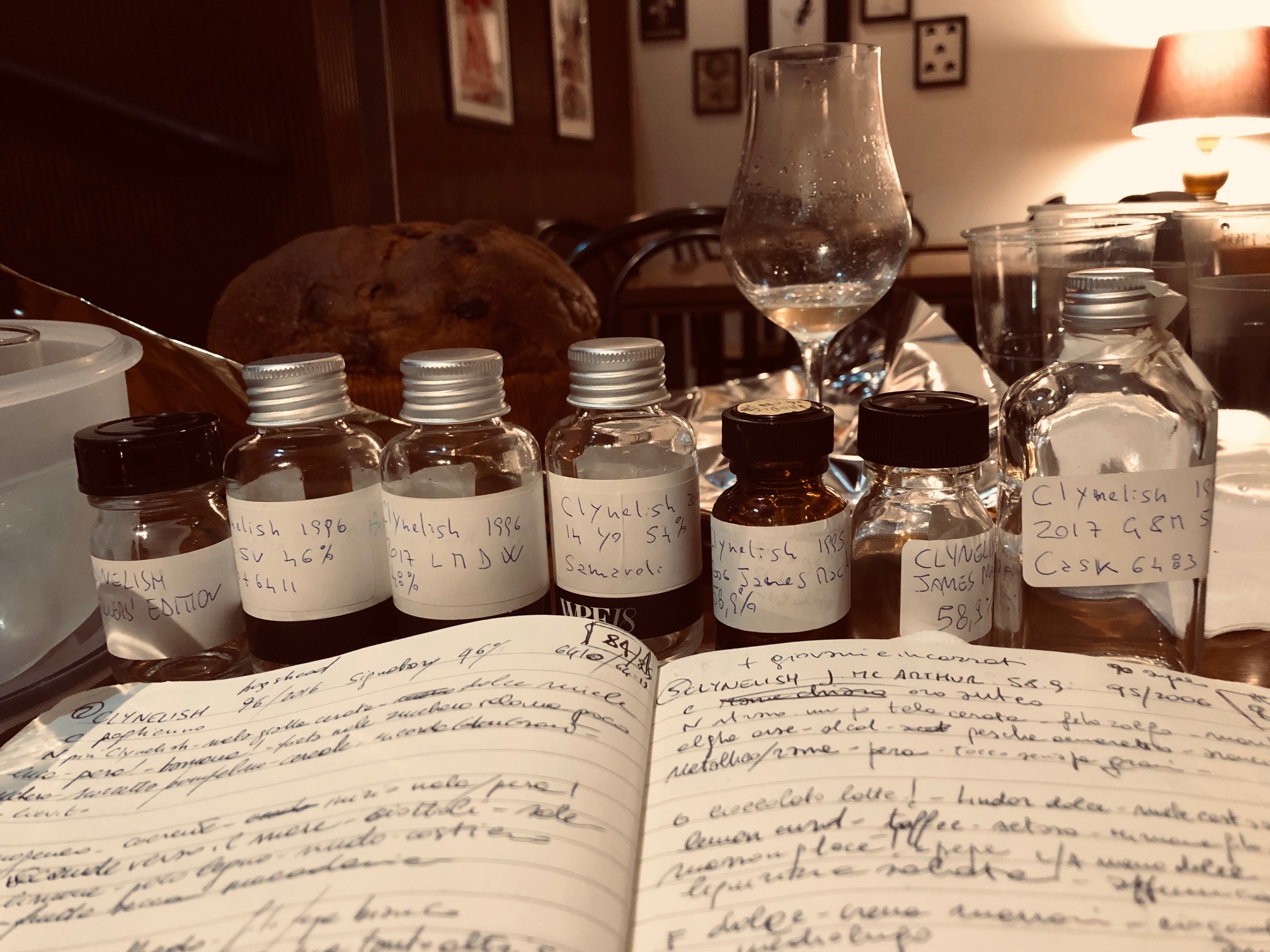 In contempt of every human brotherhood and every pietas, instead of friendly supporting the two WhiskyFacile masters burdened by the weight of years and illness, this humble writer decided to take advantage of their absence and to party hard with his friend Corrado. Who – among his innumerable qualities – also counts an uncommon generosity. Corrado decided to share his treasure, a bag full of samples of Clynelish. Six magical bottles directly from the tasting organized by the singlemaltwhisky.it forum, six sides of the dice, six roads to the wax and mineral Olympus of the Brora twin sister distillery.
Let’s see from which path you can enjoy the best view.

Clynelish Distillers edition (2018, OB, 46%)
Uh, what an olfactory delight! Let’s start with the creative considerations: can a whisky be drinkable on the nose? Is that a dangerously insane synesthesia? And yet it’s as inviting as a toy shop: it opens on winey, liqueur notes. Despite the “Oloroso seco” mention on the label, it’s like smelling Vin Santo. It shows a freshness of orange soda that preludes to the more grainy side, let’s say Frosties, to emphasize the sweetness. Raisins, a little bit of extinguished candle and then, rather unexpected, red fruit soap and poutpourri. Angelo – who drinks with us – got carried away: luxury woman’s perfume…
Then, you turn the corner of your palate and… you’re in another world. Here, it’s very sharp and the alcohol is more evident. The winey character remains, but now it’s drier. Apple peel, peach pit. The wood makes everything very dry and unkind: spices (cloves, perhaps star anise) and coffee powder. The finish is consistent, tending to bitter and almond. Good persistence, a pinch of light saltiness on the finish.
Call a whiskyatrist, because this malt is a bit split. Two different winey sides, two different sensations. The vote takes into account this lack of balance and unfortunately penalizes a whisky with an excellent nose, but that does not respect the promises. And we don’t like liars very much: 83/100.

Clynelish 20 yo (1996/2016, casks 6410 & 6411, Signatory vintage, 46%)
Like the red Fiat Panda in the ‘80s, the Clynelish SV is one of those classics so widespread that anyone stumbled upon it once in a lifetime. Among them also Jacopo & Giacomo, who have reviewed a twin version, a blend of the previous two barrels, the 6408 and 6409: what a surprise!
End of foolishness. It is immediately clear this is another sport: much more in line with the canons of the distillery (which are conventions, come on), minimum cask approach. It opens with yellow apple, the waxed ones, so shiny on your greengrocer’s shelf. Heather honey, pear and banana bombs, apple pie with icing sugar (but those without butter, which leave you dissatisfied, sighs Corrado with nostalgia). A definitely yellow whisky! And in fact a grapefruit peel comes out. Along with a smell of bread dough (yeast, cereal), that gives the idea of a young malt, which it is not. A voice says: “It looks like a more mineral Glen Grant” and the comparison holds up.
In the mouth it is homogeneous, same apple/pear attack. Then, however, it goes light-hearted towards the sea: wet and dried pebbles, saltiness, lemon. Here it is, that minerality we chased like the philosopher’s stone! Again almost no signs of wood, just a little bit of light dried fruit, like macadamia. Naked and coastal, towards the end it becomes bitterish (lemon peel) and a drizzle of white pepper cleans everything.
Didactic and simple, like those tables used to teach the letters at primary school: C for Clynelish, of course. If you want to find a flaw, we can say we would have expected something more from a twenty years old. But we’re 4 Clynelish away from finishing this tasting, so we do not complain. Between 84 and 85, we’ll go for an honest 85/100.

Clynelish 20 yo Artist collective #1.3 (1996/2017, La maison du whisky, 48%)
If the Olympus were in Cremona, you could walk for miles without a meter of difference in altitude (and without seeing the tip of your nose because of the fog). Instead it’s a mountain, so we need to climb it, both in terms of abv and pedigree. So here is a blend of two barrels of sherry bottled by the Maison du whisky for the splendid Artist Collective series. Things get complicated: the nose is more cryptic, but you can immediately understand that it will be true glory. It opens on the orange marmalade and on a curious and intriguing aroma of rhubarb, almost vermouth. It is bitter-sweet, played between licorice stick and dried figs. The red fruits are not fresh, dehydrated goji berries and dragee orange peel come to mind. The sherry is deep, moist, with tobacco leaves and overripe blood orange.
Chocolate and caramel, even eggnog, spread in the mouth. What a creamy palate!. An intriguing, strange peat peeps out, smoothed by time: it’s the mask worn by the mineral character of the house, so let’s say graphite or gunpowder. A doubt is growing: what if they had used ex-Brora barrels? We should count the years, but we prefer to focus on the second palate, where the wood still gives licorice and an aftertaste of pepper. Dried plums, too!
The finish is epic, first chinotto (starting with the fruit, then just the soda); again rhubarb, bitter cocoa and a length that melts into a salty-lipped smile.
Excellent, challenging, varied. No waxiness? Actually, who f*ing cares if the whisky is so good: 90/100.

Clynelish 2004 Expression (2004/2018, MaSam, 54%)
Zeus is coming our way. And who but Samaroli could take over for the master of Olympus? The whisky comes from one of those evocative ampoules of the series “From Silvano’s collection”, edited by his widow, Maryse. We drink it from a little prosaic sample, but we rely on liquid poetry. The very pale color tells us the barrels here have sat in the stalls, applauding the evolution of the distillate, and in fact the nose is very “sour”: unripe pineapple, lemon and lime, fermented notes. Then there is a sugary sweetness of gooseberry and an undefined minerality, between citrus and salt: Citrosodina? It takes time here. Those who wait will come across a tropical note almost like old whisky, even if we are not talking about elderly. The alcohol is not evident, but perhaps it keeps aromas on a short leash. Two drops of water improve the effect and bring out a touch of extinguished candle.
A scalpel: sharp, pungent, pepper and chilli pepper open the party. Then the fruit spreads (lemon and grapefruit, but also ripe fruit salad and golden apple). Very aromatic, wildflower honey. It is almost balsamic. The sweetness is contrasted by the savory: white chocolate with grains of salt, if Lindt guys read it, they can patent it. Hazelnut. With water it becomes even more mouth wrapping, deliciously waxy. A sparkling, lemony, marine finish. Angelo extracts the memory of Turkish lemon salt from his moustache. Corrado today is in the mood for similarities, so he says: an Ardbeg without peat. Very austere, it doesn’t hide the edges and it makes a boast of them. The initially banal nose is just the prelude to a great tasting experience, a hellish sudoku that is a joy to solve. 90/100, but Angelo would have been more generous.

Clynelish 10 yo (1995/2006, James McArthur, 58,9%)
Here, unlike Samaroli, we are happy to have our little sample, because the bottle of the series The Way of Spirits, with its Celtic cross on it, is sad like one of those postcards with the words “Greetings from Gabicce mare”. We expect a lot from our N5, since the forum guys put it in first place in the sextet.
The first nose is a bit weird, waxed canvas and a bit of sulfur. Surely it doesn’t hide the coastal birth, as there is also a hint of seaweed that has appeared. The alcohol is bulky, but it doesn’t bother. Even the sherry influence is a bit rough, and next to a note of peaches & Amaretto and overripe orange, there is a clear metallic hint of copper. Pear and mustard grains.
Who put milk chocolate in our dram? Like Lindor, sweetness and creaminess. A sensation repeated in the notes of chestnut honey and lemon curd. Silky toffee and a sensational hint of marron glacé. And yet it remains that never unpleasant sulphurous touch, now accompanied by pepper. With water, the sweetness drops and the saltiness increases. Salted licorice. Wonderful smoky and almost earthy aftertaste.
The finish is long and sweet, chestnut cream and dark chocolate. It’s the only part a bit impoverished by the dilution.
Well, this is a young and nervous whisky, no doubt about it. Definitely tough, the less compromised and perhaps the most exciting among the six drams. It’s like a roller coaster. Two of us lower the average again, but we still stay at high altitude: 88/100.

Clynelish 19 yo (1997/2017, Gordon and MacPhail, 55,5%)
We pour it holding back the tears that accompany the last day of vacation after a great journey. A nearly twenty-year-old (“19 years and eleven twelfths”), bottled for the series “Germany at cask strength”: it is almost the same age as the LMDW bottling, but matured in first fill American hogshead, so let’s expect richness of flavors. In fact, a gorgeous basket of ripe fruit worthy of Caravaggio’s still lifes is hear: peach, apple, melon, apricot, pineapple… All covered with a warm, fragrant layer of wax. The wood provides a combination of vanilla and honey, even macadamia nuts. It becomes more and more tropical with time, a flash of wet hay and then a memorable melted butter explodes. Pandoro, yes, but triple butter.
Pardon, quadruple, because it goes on in your mouth. We missed the classic oiliness that made unforgettable so many Clynelishes. Here it is! The active barrels accentuate vanilla and honey, but they could do little if not supported by an almost statuesque body: apple, banana and ripe pineapple on the fruit front; freshly baked cannoncini on the pastry front. In between, we – lucky boats -, are jolted by sensations. A drizzle of salt, lemon peel, a pinch of ginger and sinking in this sea is sweet to us… Consistent finish: custard, butter and salt. Cosy like a duvet.
After so many roughness during this journey, after complex and “cerebral” whiskies, here is a relaxed one, to drink without a decoder. An intensity of flavors and an admirable pleasantness, almost touching. Yet this relative innocence is not mistaken for banality. This is the promised land, where milk and honey flow. Actually, it is better: here melted butter and honey flows, and sorry if it’s not enough for you. 90/100, even if it’s a “whiskyfacile”, an easy whisky.