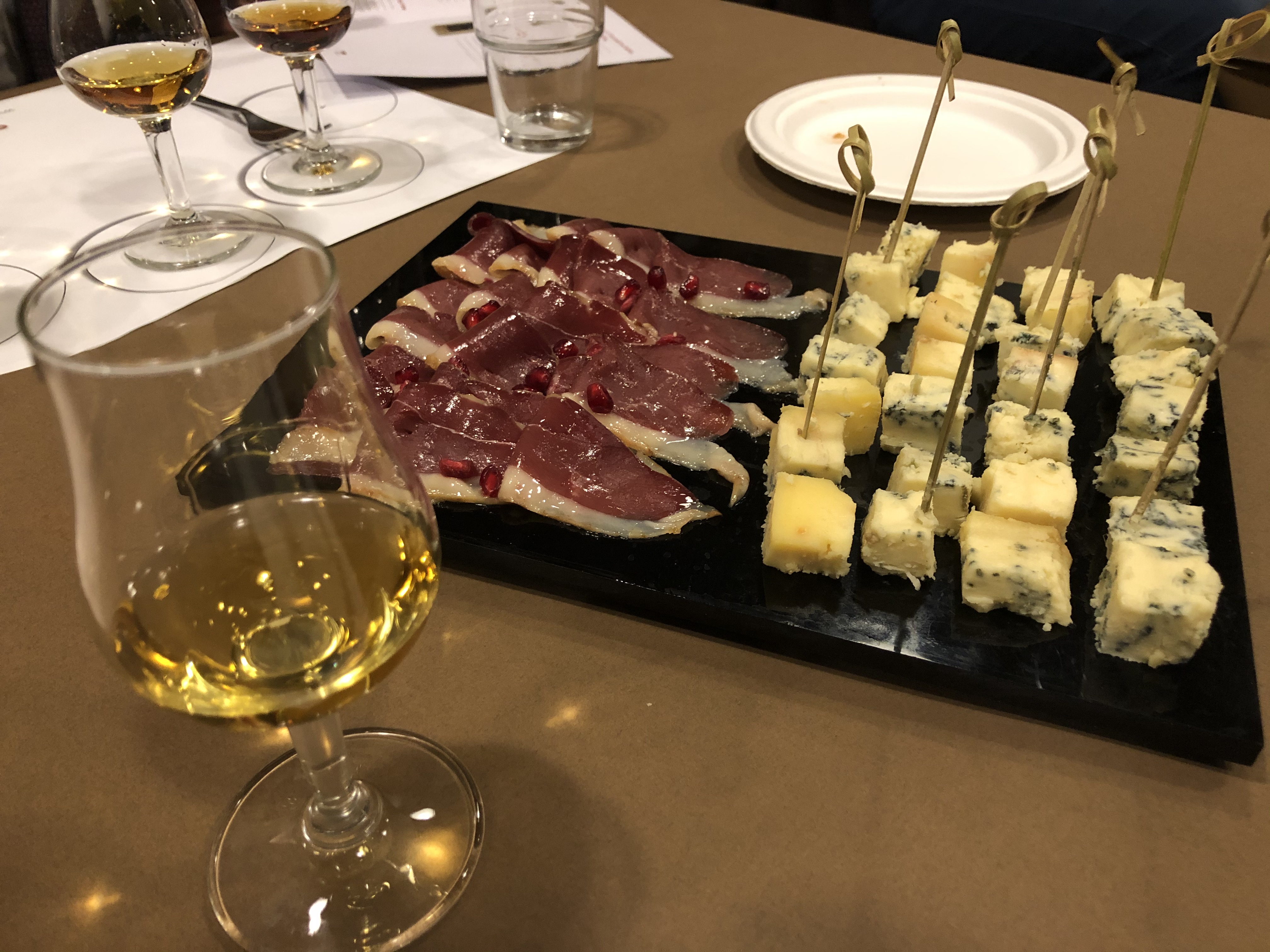 Okay, there are more and more tourists from Qatar or Ontario queuing in front of Leonardo’s “Last supper”. Well, the design industry is flourishing and sales of Plexiglas stools are going great. What a joy, a palace covered by a jungle of begonias has been voted the coolest skyscraper in the world. It’s all a thrill. But what really makes Milan the navel of pleasure is that at certain times of the year you can stumble into a distillate tasting almost every night. And you know, this quality of life makes the per capita GDP seem like a negligible detail.
In the wide range of temptations puttingt the proverbially ascetic Milanese people to the test, towards the end of November, a curious event – “Fantastic whiskies and where to find them” – has sprung up. Appointment in the Castle of Hogwarts a.k.a. the headquarters in Via Morbelli of Winetip, a wine retailer with 3 thousand labels and 80 thousand bottles. Host of the evening, a more gourmet Harry Potter: Martial Hernandez, the man who has transformed the company into a reference point for spirits. In the glasses, five whiskies distilled or bottled between the late ’70s and early ’80s. Practically a revival of Disco music in the key of malt.

Martial is a southern Frenchman of Spanish origin who – during his long career as a sommelier and maitre – ended up in Italy and found himself as comfortable as an oyster in Brittany. In fact, he has started a family and for years now he has been looking for, buying and selling spirits: probably the best job in the world, together with the guardian of a tropical island. Wandering around wine cellars, online auctions and parallel markets, he’s put together a platoon of bottles that’s not bad and it’s worth a look (even in the treasure storeroom…) to get an idea of what you can find at his place.
In any case, the good Martial thought that the cosy wine cellar of Winetip was the perfect scenario for a series of tastings. So he created a unique format, in his own ingenious way, like hot water (or cognac…): drinking whisky while you eat blue cheese, smoked duck breast, bacon and other palatal pleasures. Are you complaining about the tasting notes, compromised by such strong flavors? Yes, probably. But do you listen Beethoven trying to decipher the semi-tones? Do you dive into the Sardinian sea to analyse the salinity of the water? No, you do it because it relaxes you and you like it. So shut up and fly: Stilton, dark chocolate, a 100% Meunier champagne and no more worries.

“O tempora, o mores”, old Latins would have said. A Speysider of the past that Seagram imported in Italy when Wham! were at the top of their career. He has a  nose that reminds us to “The party” movie, with Sophie Marceau: not because it tastes like a birthday cake, but because it is a hymn to sweetness: a sac-à-poche of custard in the nostrils, cream horns, apricot brioche. The fruit exults like Tardelli at the World Cup in ’82: golden apple, banana, pineapple. There is also a floral touch of orange blossom, wax provided by the time spent in the bottle and an impressive air of pandoro. But in the mouth it imitates Cinderella’s carriage and it returns pumpkin. The creaminess dissolves like heavy makeup after a night dancing, it remains a dry palate, played between almond, dried orange and white pepper. All the cereal emerges, but in a cheap way, like vodka. Okay, blasphemy goes back: like a nice vodka. Totally two-faced, it seems a textbook case to explain the absolute and arbitrary overwhelming power of time over malt: it can amplify the fruit and the wax taking the nose to Heaven; but it can also plunge the palate into purgatory. The average is an 83/100.

In 1995, Velier – historical brand of Genoese importers – launched the “On the road” series: 4 single casks by Signatory bottled in 1,200 pieces with labels signed by the set designer and illustrator Emanuele Luzzati. We get a nice Linkwood.
The difference in nose compared to the previous Glenlivet is clear, like going from a Mirò to a Morandi (not Gianni). The first impact is very oily and delicate but our impressions are not undermined by the gorgeous duck breast we’ve just eaten: we’re true professionals, come on! No, actually the nose is just recalcitrant, it needs time to overcome shyness. Slowly, like a snowball that becomes avalanche, it gains vitality on the fruity side and turns exotic. From apricot and apple (a lot!) it passes to a fizzy mango. Somewhere a trickle of smoke, but this time maybe the suggestion is really food’s fault. To the palate it pays a little duty to the low ABV, but it immediately seems a masterpiece of equilibrism making the ètoile Roberto Bolle look like a cripple drunkard: elegant, it combines sweet malt with a pleasant note of toasted peanut that makes you salivate. Again a thread of smoke, the wood is present and speaks the language of pepper. Grapefruit juice and acacia honey summarize the balance that lasts in the finish, where a tasty touch peeps out. It resembles “The Name of the Rose” novel: you can read it as you want and it always remains pleasant: both as a malt of great drinkability smooth and round, and as a single cask well facetted and enriched by the experience. 87/100.

Coup de théatre in the presence of the most awaited glass guest of the evening: who can tell if this bottle is real? Macallan Giovinetti from the early 80s, the older brother of the famous 7-year-old created for the Italian market. But something doesn’t add up and Inspector Martial was doubtful when this whisky was proposed to him. The bottle is definitely Macallan, the label probably: but are we sure it is a 12 years old? In the buzz of bystanders the global consultation starts, but the only voice that rises competent is Giorgio D’Ambrosio’s one, the collector who handled an army of Macallan. And the man from Bar Metro said yes: right label, is printed on the Fabriano card that Macallan has always used. Macallan, it is. And it’s also delicious.
Sticky toffee pudding as soon as you approach the nostrils, to open a compact bouquet typical of these old whiskies: dried figs, milk chocolate, plum and raspberry jam. The fruit is ponderous and sticky, baked dates and peaches, even cherries in spirit. Slowly from the layer emerge remains of a more composite nose, as well-preserved vestiges: cigar box, poutpourri and spoonfuls of chestnut cream. In the mouth remains the same sensation of jam (of figs) that spreads and mixes everything. Compared to the nose, the chocolate becomes darker, the fruit turns to ripe tropical. There are spicy/herbal notes of cumin and rosemary, followed by an acidic touch of chinotto. Full and intense until a long finish of burnt red fruit tart with a bit of ginger. It is said that the old Macallan are a bit all the same. For sure they are (almost) all good and this is no exception. The ability to wrap everything and to drip on your taste buds is a spy of the fact that some old barrels were in here. And the wonderful feeling of having a Macallan’s practically covered mouth is not bad at all. 90/100

Samaroli and Highland Park are three words that in the same sentence unleash the demon, like the verses backwards in the songs of satanist metalheads. Formally the distillery is not declared, but this bottle represents the Orkney Islands in the series of Duthie’s bottling dedicated by Samaroli in 1988 to “Frammenti di Scozia”, and since there are two distilleries in the archipelago and one of them is much less rated… So, while the distillate is oxygenated, for a moment we stop to think about the essence of this evening: bottles created for a mass-market when footballers still used to play with numbers from 1 to 11, which are now lost jewels, stuff that goes on auction for hundreds of euro.
Having overcome the melancholic moment for the hourglass of our lives that is inexorably emptying, let’s get back to whisky. The impact is nice and dirty, very unique. Smoked cheddar, something wet between the hay and the damp rope. It has a strong character, perhaps divisive, but it knows its stuff. There is some leather, maybe wet too, and a lively brushstroke of carob, under which lies a quiet sea of malt and heather honey. The character becomes exuberance in the mouth: a chewable time bomb, still centered on carob and dark chocolate. The peat is there without being blunt, well married to chestnut honey and an intense wax, definetely mineral. At the end it comes the salt, trade mark of the island distilleries, that remains in the astonishing finish, between cola and dark chocolate praline. As rude and boorish as a punk rocker, but how much determination and how much mastery in this overflowing whisky. 91/100.

Under the Intertrade brand, founded in 1984, Nadi Fiori shaped his long friendship with George Urquhart, owner of Gordon & MacPhail. And never was a more delightful union for enthusiasts, since from that moment on, Italians began to find in restaurants and wine bars classy single malts almost unknown until then and not infrequently bottled at impressive ABV. Exactly the case of this Glen Mhor, a 65% titan.
There are few whiskies from this distillery available around at “human” prices, so the audience becomes silent and curious to try to grasp its character. And it suddenly realize this is a nice puzzle. The fifth dram is always the hardest to understand, and frankly it seemed that alcohol worked like those masks with glasses and fake mustaches. The nose, initially, does not go beyond a sense of fruit (green apples, pineapple, lemon), vanilla and sage. Net of a pungent touch almost like pickles, it is not aggressive, it is not napalm in the nostrils. One would even expect something more violent, but the nose it is almost stifled. So the wise taster uses the old “put in sample and take it home” trick. Good choice, because he takes the chance to try it again calmly, And, well, this whisky definetely needs time and concentration.
To those who wait, as the Guinness advert says, it provides an old-fashioned propolis mineral richness, with an “off” but intriguing note of copper and (it seems incredible) anchovy sauce. All this before an explosion of pandoro and custard. It’s like a coal-fired locomotve, it picks up speed after tens of kilometers, but then you don’t stop it anymore. Speaking of which: the empty glass whispers something peaty.

Even in the mouth the alcohol makes a bit of a hooligan in a lace and crochet shop. Toasted hazelnuts, cereal and a sincere contribution of warm wood. Honey and malt and a creaminess that would have been even more enveloping at a lower abv. The water improves it, increasing the sense of melted butter and honey, but also extracts a curious acidity, lemon juice in which ash has accidentally fallen. And mint. The finish is played between vanilla cream, eucalyptus honey and sparkling candied ginger (after adding water).Philip Hills called it a “truly great postprandial whisky” and it certainly has uncommon eupeptic qualities. But we feel like this Tyrannosaurus Rex has an even higher potential and the excessive alcohol trappings limit it a bit. Incidentally, forgive us for the length of this review, but it really goes on the podium of the most difficult whisky to decrypt: 86/100, average between the early 84 and the potential 88.