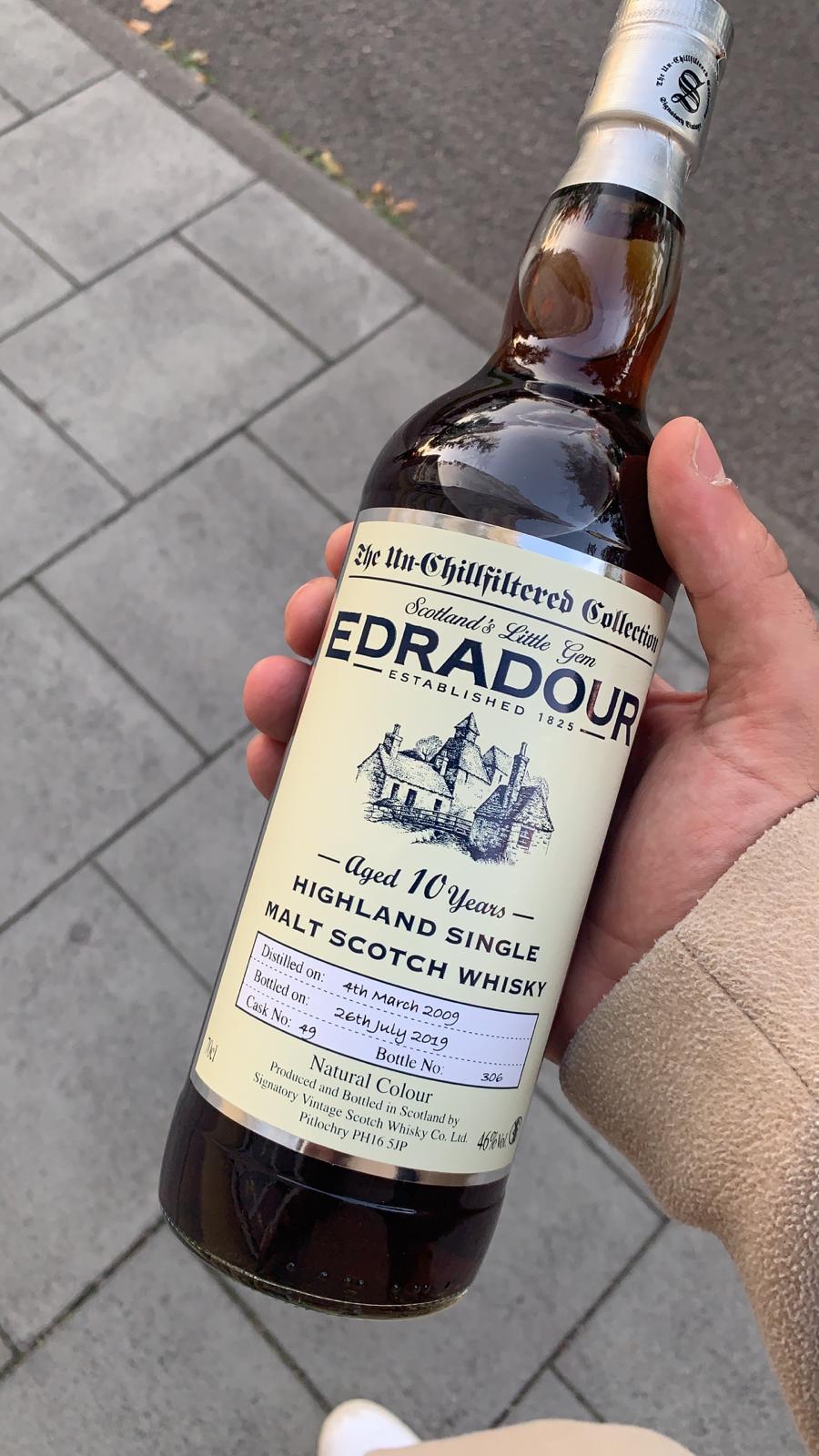 Who wants to go all the way to Pitlochry to tell Edradour guys to take down the “the smallest distillery in Scotland” sign?…
The increasing trend of micro-distilleries achieved a miracle. And now the yearly production of 260,000 litres by this enchanting and historic (1825) distillery in the Southern Highlands looks like multinational numbers, compared to some new born companies. Beyond the exaggerations we love so much, it is a fact that Edradour is a rapidly growing distillery, especially thanks to the growth of the average quality of bottlings, and it is no coincidence that the owners of Signatory Vintage have started an expansion that will soon double the maximum production capacity. Small is nice, therefore, but good and sough-after is probably even better. Today we taste a 10 year old single cask bottled by Signatory in the series “The Un-chillfiltered Collection”, result of the tireless work of barrel #49 on the distillate. The natural color, a really intense brown-cola, makes us almost in awe. We’re expecting sherry notes raining down from everywhere.

N: and in fact, it’s clearly a sherry monster, very bold from the first sniff. The barrel had to be Oloroso, and gave this whisky very dark notes: licorice, cocoa beans, traditional balsamic vinegar. Then, red fruit jam (blackberries, perhaps), but a bit on the sidelines. Lots of wood, with some spices peeping out. Cola, a bit of sugared coffee.

P: wow! So strongly tasty. It’s so influenced by the wood that it seems almost smoked: the first note that comes to mind is Tabasco Chipotle (which is a bit smoky, with notes of vinegar), then celery, a lot of licorice, chilli peppers (not because it’s hot, it just tastes like chilies). It’s slightly salty, then dark chocolate, red fruit jam. Coffee.

F: as long and dirty as the palate, again Chipotle Tabasco, licorice and salty notes.

We need to warn you: it’s a divisive whisky. The score we assign (86/100) is the mathematical average between our two grades: one of us liked it very much for its strangeness, the other definetly less. Of course it’s a challenging drink, it’s not a whisky that you light-heart sip in an evening, chatting about this and that. But it’s also a very particular profile, almost unique. Lots of wood, lots of taste, the distillate almost disappears. To taste it, you need about sixty euros or a curious friend like Davide Ansalone, who bought a bottle and brought us a sample. Thanks!