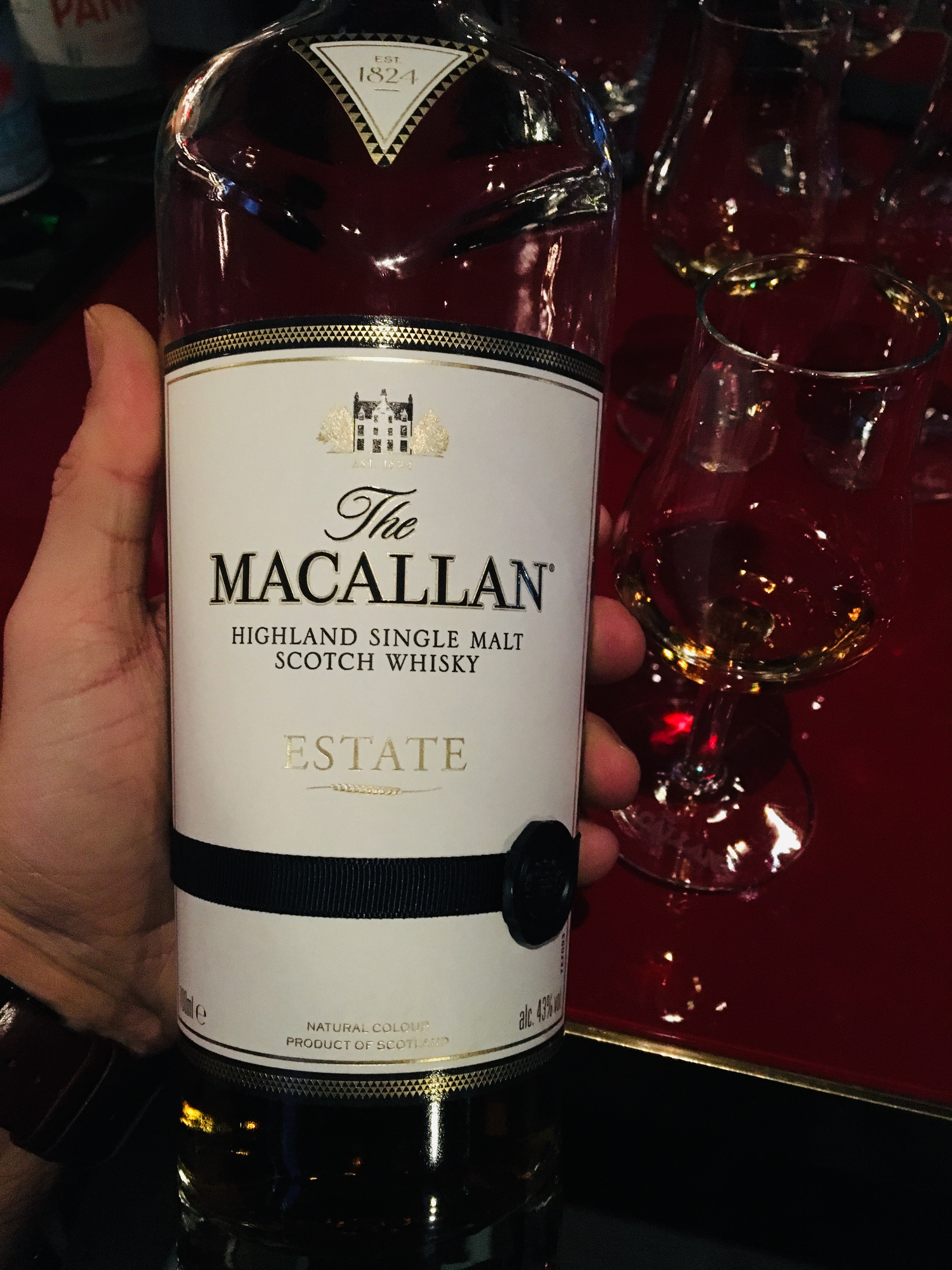 Yesterday two of us (Jacopo and Zucchetti) attended the new Macallan Estate Italian launch. Despite the Italian language (“Estate” meaning “summer”), we would like to clarify as soon as possible we’re not talking about the first bottling of the Vivaldi’s “Four seasons” series: actually, it’s a core range expression inspired by the mansion where Macallan distillery is located and where the barley distilled for this whisky grows.
First of all, let us thank the Italian distributor, Velier, for this exclusive alcoholic afternoon. Our two correspondents enjoyed a sober tasting of two drinks and four malts. The cocktails were created by Guglielmo Mirello and by the team of Ceresio 7 and they we were frankly excellent. The first one, “Easy rider”, was particularly seductive. Nicola Riske, brilliant Macallan Brand Ambassador we already had the chance to meet, was there to present the malts. Here our tasting
notes.

N: very sweet and heavy. Caramel, sticky toffee pudding. Banana candies. It’s also quite citrusy, orange marmalade and orange chocolate. Hazelnuts and a lot of nutmeg, a clear sensation of yeast and spirit (the youth is surprisingly evident, despite the strong oak influence). P: oily, with nougat and cinnamon. Caramel and orange peel, again. Later black pepper, toasted bread with chocolate, a hint of salt and (suspence!) soy sauce! Oak and coffee, too. F: short, sweetish. It
turns dry with orange, spices and Angostura. It’s a bit clumsy: emphatic, super-sweet and young in the nose; dry on the finish.

The low ABV contributes to a rather disappointing anonymity. It’s not bad, but it stops at 81/100.

N: right away more elegant, with loads of hazelnuts, tangerines, white chocolate (Ritter sport with fruit filling), bread crust… The sherry influence here is stronger, but the whisky is still very clean and well-balanced. There’s also a nice floral
touch, like rosewater. After a while, some spices and the oak. Amazing nose. P: less lively than on the nose, due to the usual frustrating ABV. It’s quite sweet,
with milk chocolate and pineapple at the beginning. Grapefruit peel, comfirming the importance of citrus in the Macallan profile, and white pepper, but a little too flat. It becomes dry with time. F: again pineapple and hazelnut.

It’s rather different comparing to the others, and it shows a wonderful elegance. The balance between spices, sweetness and fruit is nice, most of all on the nose. It’s a pity the palate is a bit monotonous. Nevertheless, 85/100.

N: again a full experience of dried fruits: oily, with walnuts and almonds. It doesn’t lack the fruity side, playing on the edge of an elegant tropical soul, with mango and caramelized pineapple. Cinnamon, tobacco, chocolate and plenty of dried figues: sherry is the king, here. P: still very tropical, with a lot of apple too. Usual spiciness, with chili and ginger: it’s tangy! Bitter cocoa and again almonds, with a creamy toffee and a caramel note. Almond brittle? F: tangerine, toffee,
nutmeg and pepper.

Definetely not a bad whisky, focused on toffee and nuts. Actually, it’s a pity that it lacks a quid: it’s just one among many 18 yo whiskies, unfortunately it’s not special. By the way, we never consider price in reviewing whiskies, but this is a 240€ bottle… 84/100.

N: is this a note of wet and stale rubber, as those old Converse All Stars? Don’t worry, it’s just an olfactive flash. The whisky was poured a bit too cold, it needs
time. Slowly, it becomes pleasantly farmy, with wet hay. And within five minutes,
it opens up. Miracle! Essential orange oil, mixed spices as cinnamon and… curry! There are also more traditional notes, as banana, mango, ripe orange and an evident touch of cherry and sour cherry. P: it starts with licorice and caramel, followed by orange peel and bitter cocoa. Again that curious hint of curry. Quince jelly and spiced aftertaste, with ginger, pink peppercorn and nutmeg. F: bitter chocolate, cocoa powder and chestnut.

It need time to start singing, but when it happens… a well-balanced and
powerful whisky is revealed. The perfect sync between the citrus side and the chocolate creaminess is its secret weapon. 87/100.