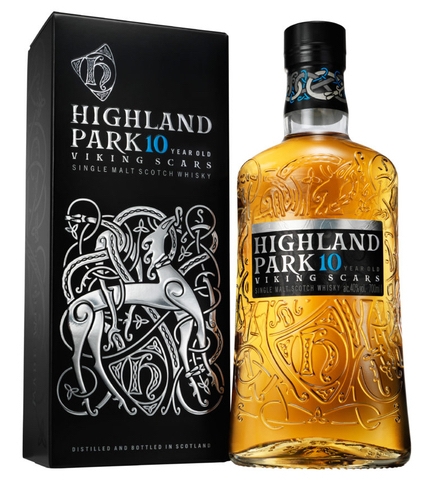 Let’s stay on the Orkney Islands and let’s return, for once, to the core range of Highland Park: as you know, since there are remains of Viking settlements on the Islands, the marketing department of the Edrington Group must have thought – a few years ago now – that it was a wonderful idea to use this legacy to characterize packaging and communication of Highland Park’s brand. We liked it; we still like it actually, let’s say they’re probably abusing it, and it’s become a bit cloying. Luckily, whisky is always very good, as independent bottlers always show: today we try the 10 year old ‘Viking Scars’, one of the 15 entry-level bottlings in an endless and indomitable core range.

N: very Highland Park, in a positive sense. It starts off very aromatic, with ‘sweet’ notes of vanilla, white chocolate, yellow apple, shortbread… Then slowly a first mineral and herbaceous note, let’s say of chlorophyll and young distillate; and then orange peel (essential oil?), together with a triumph of that thin peat, typical of HP: a slight smoke, acrid, rather mineral, growing.

P: silky and buttery, we like it very much. The low alcohol content makes it almost non-alcoholic, and it remains a vanilla-flavoured peated barley juice. Less fruity than the nose, it is dominated by aromas of corn flakes, shortbread, melted butter, then acrid smoke, a little ash. It closes on a nice saltiness…

F: …which continues in the finish, next to a coat of peat and butter. Very good.

If we have to find a flaw, the palate is too much easy-drinking: you open a bottle and you could finish it without even choosing which new Netflix series you’re going to watch. Let’s say it’s not the biggest problem we’ve found in a dram… The nose promises more than the palate will keep, but generally speaking the rating will be 85/100 (good, but seen from here maybe Serge exaggerated).

Recommended soundtrack: Vikings are serious stuff for us, so here is Windir – Arntor, A Warrior.