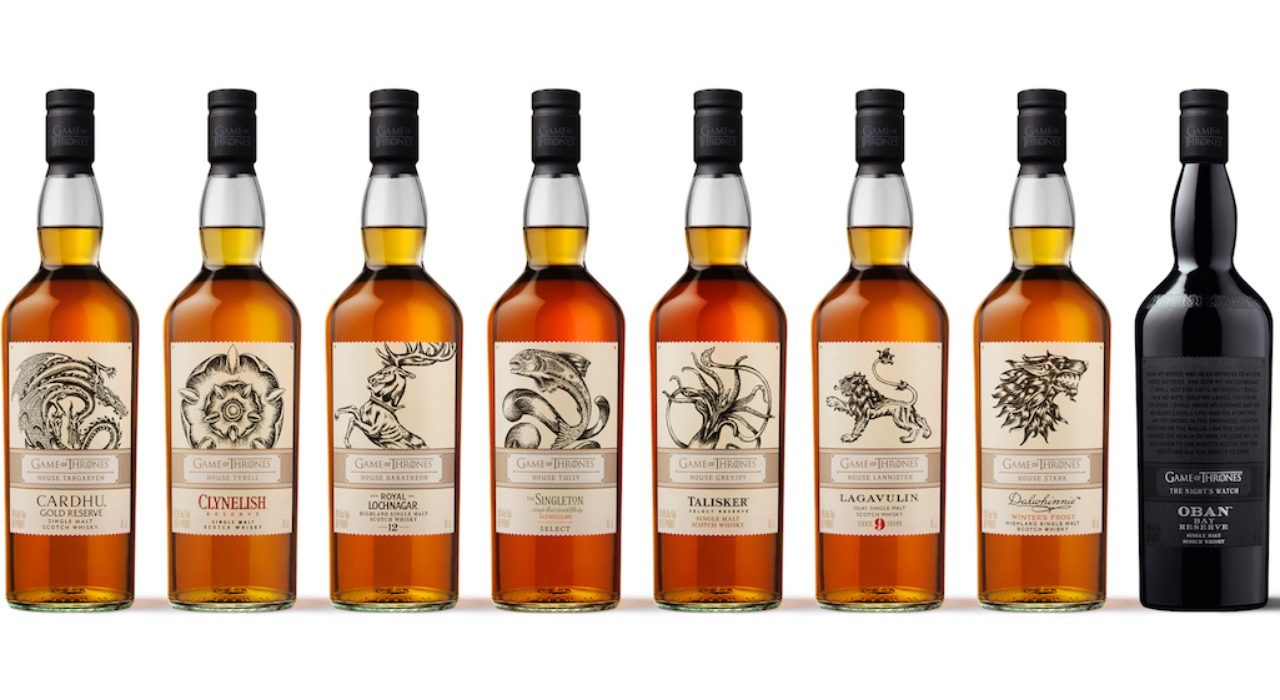 [Here’s the second and last part of Marco Zucchetti’s report on Diageo’s Game of Thrones series. Waiting for the last episode of the show on Monday… Come on, they’re finally slaughtering each other!]

Perfect combination: the Lords of Iron Islands rule on Pyke. Litterally not too much different from Skye. Greyjoys are also fierce and rebel soldiers, so Talisker’s tough malt suits them as mourning becomes to Elettra or Spritz to Milanese happy hour.

The octopus on the coat of arms and on the label would suggest a maritime whisky, “made by the sea”. Actually, the first nose is driven by a tasty aroma of bacon which we can fall in love with, like Homer Simpson with donoughts. Burning embers after a bonfire, seaweed and brine remind us that the coast is not far away from here. The sea it’s not salty, but sweet: red fruits (cherries), burnt caramel and plum & orange jam. Theon Greyjoy (before he was emasculated) describes a note of grilled pepper, but he disclaims any liability ‘cause he’d rather avoid to be furtherly maimed…

On the palate is even sweeter, like caramelized sugar and syrup. It’s probably the only bug in this whisky, at least for those who consider extra-sweetness a defect, of course. Actually, the palate seems designed to be people-pleasey. A bit less peppery than usual, some officinal herbs and grilled meata gain (glazed spareribs). A touch of leather before an excellent and long finish with chili, toasted peanuts and salt, very distinct now.

The most spectacular packaging of the series. Black, with Night’s Watch oath embossed on the bottle. We must admit a conflict of interests: the black bottle and the Night’s Watch code of behaviour really fit the reporter’s personality. Will the judge be able to review this whisky mercilessly like Jon Snow, who hangs a child?

The nose shows something recognizable (milk chocolate produced in
Switzerland, not near the Wall, raisins, candied oranges and dates). Oban’s sea-breeze has been replaced by an intense and waxy fruit (red grapes): an eccentric and divisive profile. Someone didn’t appreciate the emerging notes of damp hay, gunpowder and even goat cheese (no, we’re not drunk yet, neither we are hungry). Strange, but it works. In mouth it’s not powerful, but multifaceted. It speaks many languages: the mineral one, with graphite and some peatiness (smoked cheese); the fruity one, round and pleasant, with blood oranges and Amarena Fabbri; the spiced one, with cacao (Pan di Stelle biscuits!), cinnamon and Morositas licorice gummy candies; and even the dried fruits’ one, with salty peanuts brittle. On the finish – nicely long and fruity -, the salty goat chees comes back, with a hint of smoke and blackberry gelees.

Ok, reading this whole review from the top could wrongly evoke a Hieronimous Bosch’s painting or a schizophrenic Master Chef recipe. But no. It’s a deep and enjoyable malt, bold as the Talisker, but more fearless. With a higher ABV it would have been immortal, exactly like Jon Snow. 86/100

The two centuries old Islay whisky, prince of peat, for the most unforgiving, powerful and wicked House of Westeros: the Lannisters. This family looks like the Forresters from “The bold and the beautiful” soap opera: a cold-blooded father obsessed by sex, two beautiful sons always copulating because nobody said it’s unfair, another dwarf son and an ancestral thirst for power. Without them, “Game of Thrones” will be harmless like “The Robinsons”. Lagavulin’s personality really fits. And they share the lion as symbol.

Unconventional Lagavulin nose. It’s peaty, but not “fat”. A lot of sea-breeze, salted caramel, but the main sensation is a big bold sweetness: peach, vanilla, orange peel and ripe raspberries, not so common on Islay. A grassy layer with mint, tea leaves and cigar precedes the “animal side” of this whisky, with smoked sausages and leather. On the palate it’s salty and grilled. Peatiness is now more about burnt banana, Lapsang Souchong and marshmallows on the fire. Rather alcoholic, the fruitiness steps back but it’s still present with blueberries and apricots. Caramel, gingerbread and salty toasted almonds towards the end. Burnt, spicy finish, with young malt notes and caramel.

As the High Sparrow and Andrea Giannone – highest authorities from King’s Landing and Milano Whisky Festival – would say: “A bad Lagavulin is yet to come”. Not bad this either, and it has also the merit of exploring new ways. It pays the duty to its youth, but it strongly tastes like victory and it doesn’t betray the Islay DNA. Queen Cersei would sip it watching her enemies being skinned. Unusual, but we’re fans of it as we are of Tyrion’s. 86/100

«Crescere forti», dice il motto dei Tyrell. Beh, questo è il malto a più alto “Growing strong” is House Tyrell’s motto. Well, this whisky is bottled at the highest ABV, indeed. It isn’t enough to explain the combination, Clynelish is a waxy malt, unmistakably linked to heather heaths of North-Eastern Highlands as the Tyrells are connected to the Highgarden. Actually, Clynelish would have deserved a more badass House, but we don’t complain about it.

From the Gleincairn a wonderful nose pops up. It starts with a fresh hint of vervain, candied lemon and green walnut husk. It’s definetely mineral, lime peel and a light chalk note, elegant as Margaery’s vestments. But under vestments there is a curvy body: mou, hazelnuts and tropical fruits (maracuja), with a gorgeous note of tangerine pastry. On the palate is warm – we’re not saying “hot”, stop thinking about Margaery! -, dried coconut and passion fruit, a biscuity and malty taste, with a bit of vanilla. Besides the honey & lemon sweetness, an extra peppery twist. Interesting aftertaste of toasted sesame seeds that leads to a long finish, peppery again, filling your mouth with orange juice and mango.

Those who say ABV doesn’t affect the general taste should be branded with fire with a big “S” for stupid. This whisky certainly can count on a high quality malt, but the higher ABV simply amplifies flavors’ intensity. As if Margaery was dressed in latex… Ok, it’s better than thinking about Olenna in pajamas, isn’t it? 87/100