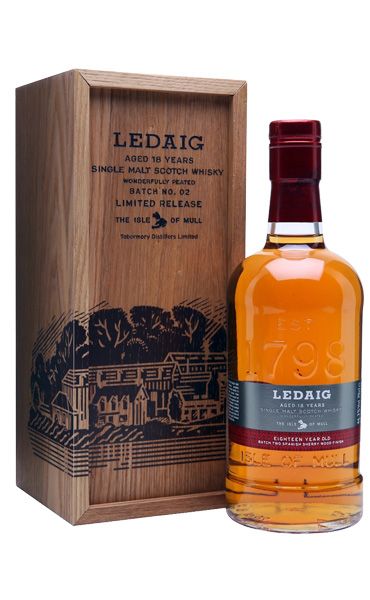 Ledaig is the peated version of Tobermory, distillery from the Isle of Mull: as we said many times, it’s an historical producer that, no more than ten years ago when we first walked into the realm of scotch whisky, wasn’t one of the most reputed, to say the least. “The stinky whisky” was one of the most indulgent definitions. Years changed things, luckily, and even the die-hard haters had to raise arms in front of the quality of this whisky – thanks to the great work done by indie bottlers, that have been able to select excellent casks. And if Serge defined it as “the new Ardbeg”, well, there will be a good reason! We’re having today the official 18 yo, finished in ex-Oloroso casks (we have
batch 3 in the glass).

N: we were expecting a dirty profile, and in fact we found it, very complex and layered.
Gunpowder, plastic boots, but also too ripe oranges, Shropshire cheese with Corynth raisins, some taleggio cheese. It’s fat and dirty, with sticky peat and bbq sauce. That said… Wow!, such a whisky! After a while there’s also a sense of a mellow bitter liqueur, milk chocolate, raspberry.

P: the path goes backwards here, and the first hint we detect is… the epiphany of a fruit barbecue! A lot of blood oranges, fruit gelée (there’s a sense of deep, almost abstract and artificial fruity sweetness), then the ‘dirt’ goes in charge, with bacon, roast chestnuts, an organic peat and taleggio cheese again.

We’ll hear a lot about Ledaig’s core range: it’s so nice to see a distillery that shines again and heads to the whisky Olympus. Complex, unusual, satisfying, able to hit your senses with a lot of different unexpected suggestions… A unique profile, that stands proud to show that single malt scotch whisky is a beautiful world: with just three ingredients, almost equal for everyone, you can make so many different things. Ah, that’s why we love whisky after all. 89/100.

Finally our fourth and fifth single casks are on t