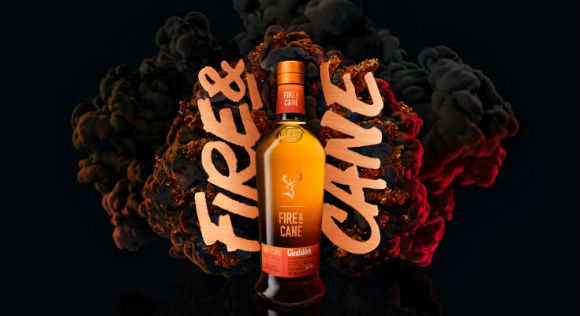 Glenfiddich, who year after year contends with Glenlivet for the world’s best-selling single malt prize, pays for its own popularity: it enjoys great respect among casual drinkers, while often being snubbed by passionate nerds. We are politely in the middle, but we confess our perplexity when our friend Corrado brought this “Fire & Cane”: a Glenfiddich NAS, peated and finished for three months in barrels of rum (they have the foresight to tell us that it is “not just any rum, but South American rum”: thank you very much). With this recipe, what could possibly go wrong? Well, everything.

N: rather light but very aromatic, certainly much less worse than expected (or feared). Sweet, fragrant, you can clearly smell the peat (a hint of thyme, we would say also black olives in brine). Definitely spicy, with cinnamon and cloves. With time, the scent of pastry grows, indeed. We want to be very precise: you know the crust of sugar on the edges of the fruit tart?

P: extremely extreme, but unexpectedly unexpected. Well, this doesn’t work. Unexpectedly balanced. The peat is even more present (smoke, embers), and here on the palate it remains very easy and pleasant, even if a little less convincing. It tastes like caramel indeed. More black olives, savory and spicy tips (black pepper). Orange candy.

F: relatively persistent but not very long, still the sweetness of rum (rum and coke, shall we say?) and a pit of smoke. A rum and coke in which someone has put out a cigarette by mistake, or for malice. The worst part.

Apart from the ending, which is forgettable after all, this is a pleasant, people-pleasey whisky: part of Glenfiddich’s “Experimental Series”, in fact it’s very far from the image you normally have of whisky from the Dufftown distillery. Sometimes it is said that modern whiskies are “flavor-oriented”, i.e. they are “built” to get a certain profile: this one plays exactly in that league. It’s an everyday whisky but it’s well made, and properly priced (less than 50€). The hypothesis is that if you put a bottle on the table while playing cards, the bottle will finish before the game. 82/100 and thanks to Corrado, it wasn’t a scam as we feared!