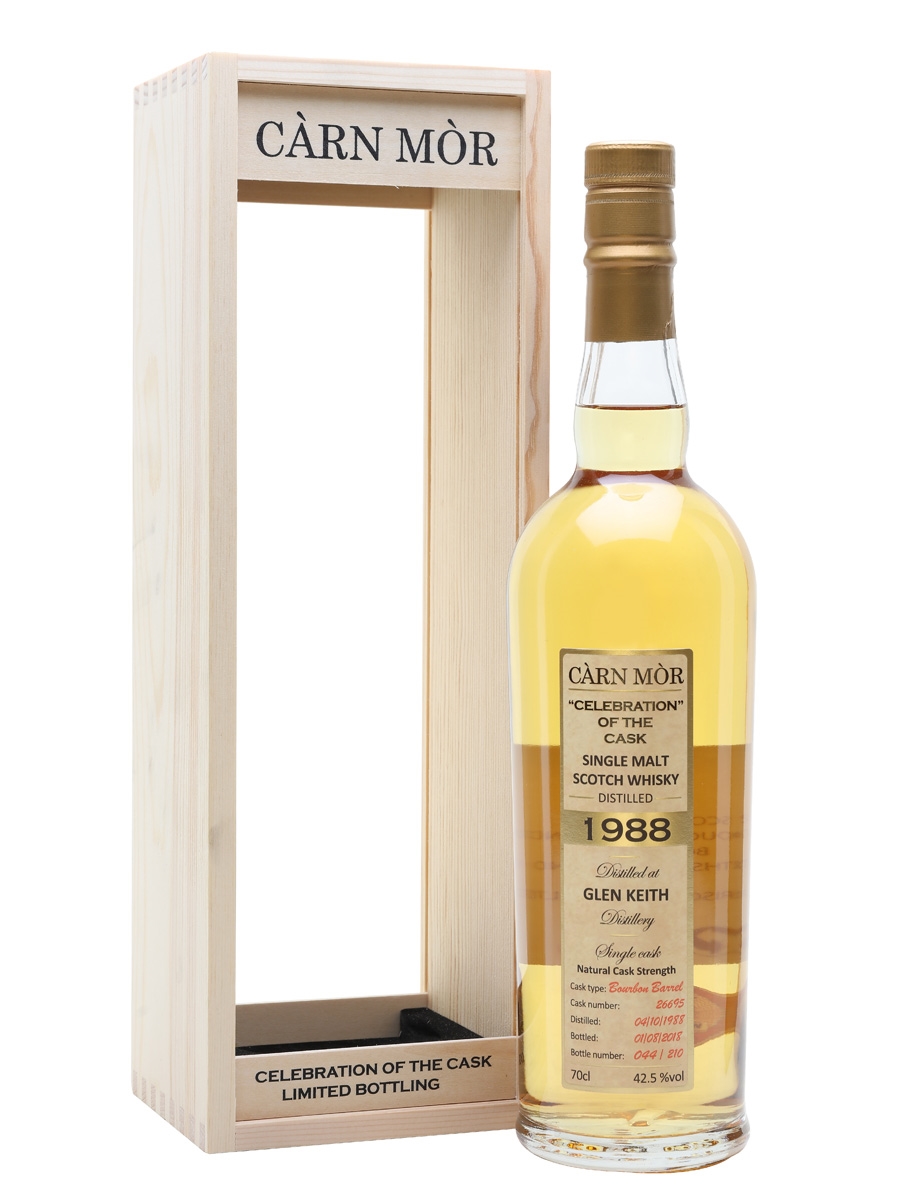 Thanks to the valiant Morrison & MacKay, owners of the independent brand Càrn Mòr, let’s get back to “celebrate the cask” with a Glen Keith almost 30 years old, matured in a single ex-bourbon barrel and bottled just in time, at the cask strength of 42,5%. The serie is called precisely “Celebration of the cask”, but first we want to share with you a couple of useless things about the distillery: founded in 1957, it has always been a workhorse for Chivas’ blended whiskies (Chivas Regal, 100 Pipers…). As a single malt, Glen Keith experimented only one official bottling. It has been closed for ten years and it re-opened in 2013. So what?, you may say. And you’d be right! It’s better to drink, with the supreme Marco Zucchetti and with Angelo Corbetta.

N: right off the bat, we’d describe it as an elegance monster. Surely tropical (ripe pineapple) and floral (gardenia and tuberose), it stands out for a mineral veneer of paraffin that enfolds everything and it’s so astonishing to shock us. In addition, you can easily recognize a fresh, green side, with cereals and balsamic notes (Zucchetti dares suggest… chlorophyll Brooklyn chewing gum, just to give an idea of its wonderful sugary aroma). Beside, here it comes a pastry whiff and something that reminds us almond paste.

P: you pass through different stages, all of them rousing. It starts oily, heavy and mouth-filling. It seems to taste the ricotta’s stickiness (seriously, did we actually write it?); then it’s time for the balsamic, citrusy and fresh part of the show; and in the end, no longer awaited, the golden age of tropical fruit (maracuja), long and rich.

It’s good, goood, gooood indeed. Super-complex, as a 30 years old guy should be. It’s surprising especially from the intensity point of view: with a 42,5% ABV we expected a contained power. Instead, it’s a solid wall of taste, explosive in its own way. It confirms a great truth: Glen Keith, once reached a certain age, becomes a fruity and herbaceous jubilation, a mineral and oily sarabande. But shh, don’t tell Chivas… 91/100