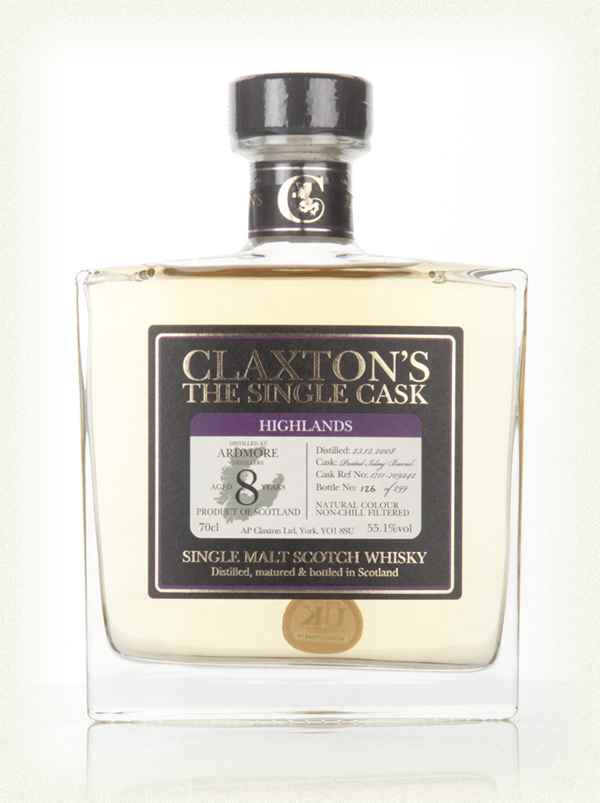 We keep on following the latest releases by Claxton’s, an Indie Bottler imported by our friends from Whiskyitaly down here. Let’s go with this 2008 Ardmore, matured for 8 years in an ex-bourbon hogshead. Before opening this sample, something (well, it was Google…) is telling us this is one of the many heavily peated Ardmores around these days. The importer adds that this cask was previously used to mature peated Islay whisky. So is it a sort or meta-peated whisky?

N: definitely open, despite the high abv. We may be heretic and scoundrel criminals, but at the very first approach it reminds us of a mezcal! It’s quite grassy and spirity, with wet cereal and pudding notes; really herbal and lively, with promises of a sugary sweetness, typical of white spirits. Peat is smoky and acrid, sharp and pungent, with hints of… we don’t even know for sure, it’s something organic, something cooked maybe: one of us thinks of a sauteed kidney. Yep, you weren’t expecting that!

P: such an impact! Starts quite sweet, with licorice, chestnut honey; it also has a spirity sweetness, very sugary and ‘abstract’, let’s say. At the same time, it displays a powerful peat smoke, chemical, almost medicinal, really extreme. Very well made, but not for the faint-hearted.

F: the smokiness lasts soooo long, intense and aggressive; there’s also a clear note of malted barley (we don’t know if you ever tried a peated malt kernel – well, that exactly).

A whisky that lives on powerful passions, and it manages to remain in balance teetering on the brink; it’s only a bit simple maybe, and the palate is a bit too sweet for our taste… But if you like peated malt spirit, this cask is made for you. We’d be curious to use it in a drink, since we’re pointless hedonists. 85/100.