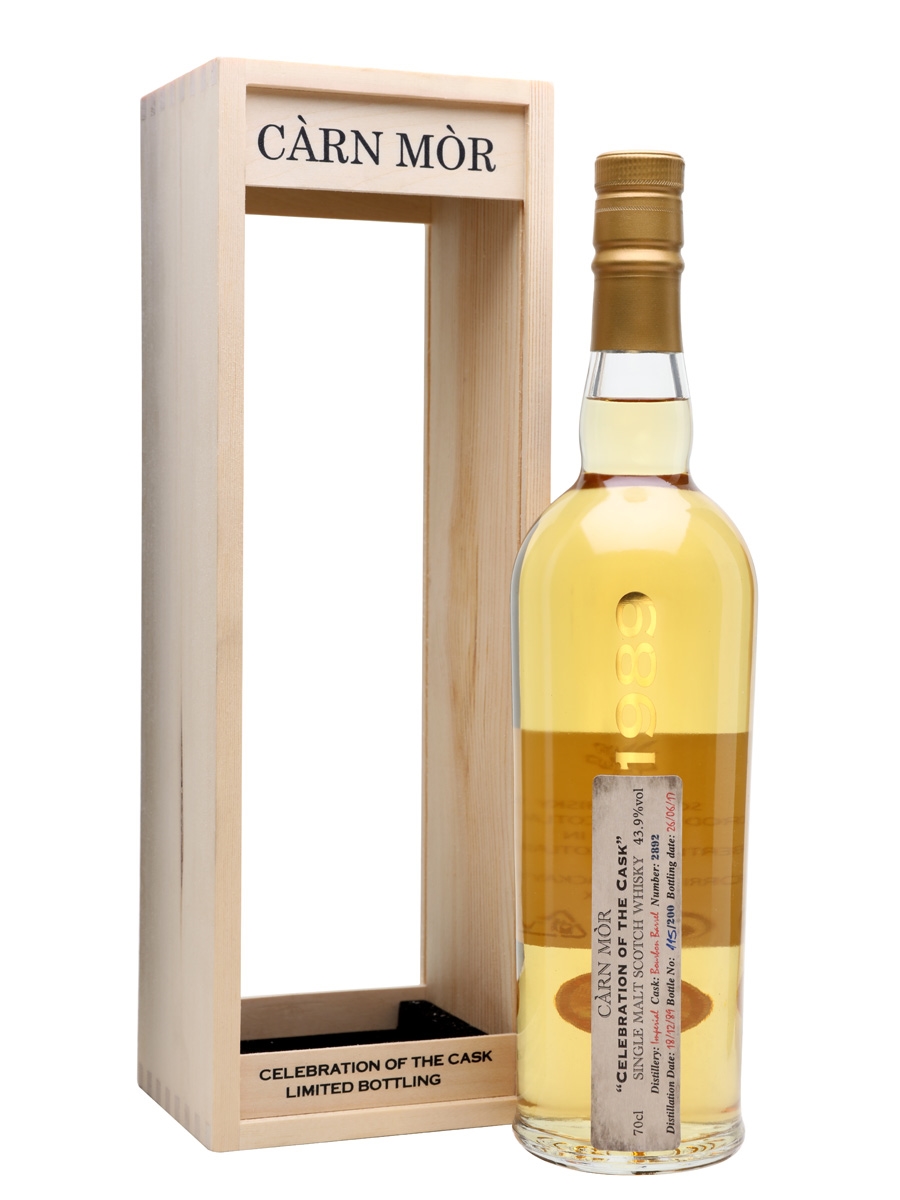 The first Imperial in whiskyfacile’s history! What a shame, we haven’t been reviewing one since six years… It’s a fascinating distillery, whose misfortune is legendary and chronic: its history is like an Emmenthal cheese, riddled with holes, failures, re-openings, re-failures, ownership’s changes… And the last chapter of this tragic history is equally sad: it was closed at the end of the ‘90s, the stock is owned by Allied/Pernod and in this time of whisky boom it would be natural to see it re-opened… Not at all, it was demolished to make room for the giant Dalmunach. We celebrate this ill-fated distillery with a 27 yo single cask, distilled in 1989 and bottled by Càrn Mòr.

N: a really complex nose, open and attractive. First of all, there’s a wonderful and aromatic sweet side, playing between brioche, butter, honey and apricot… Almond paste, too. A basket full of yellow fruits (super ripe and floury apples) and a citrusy shade, probably lemony. But what drives us crazy is a farmy note that simply makes everything even more intriguing: a veneer of matured cheese (it reminds us the “sweating” Parmesan; it shows also a moldy side similar to Roquefort. Actually, we want to run wild with it: Sauternes & roquefort, ‘cause we’re two fucking bon vivants. Or two miserable scoundrels, as you prefer…) and a lot of beewax.

P: if the nose was an explosion, here the low ABV (probably natural, not due to dilution) provides a first sip not so memorable, compared to the nose. Anyway, it redeems itself soon, for a medium and second palate really glorious. It’s again waxy and oily, with a gorgeous taste of warm butter: cereals biscuits, honey, pastry; an exciting carpet of tropical fruit (papaya, as we could imagine from a “sweaty” nose) and Golden apples.

F: plenty of melted butter, used for the cheesecake’s crust; tropical again. And chocolate with coconut.

The chewiness of the body – on a tactile level, indeed – partially penalises a whisky that we would have rewarded even more: it’s one of the whisky profiles that we like the most, with a buttery distillate that after many years spent in a good cask offers astonishing loads of tropical fruit. Complex and outstanding, we’d love to drink bucketfields of this: 91/100.